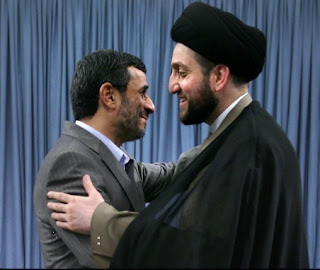 Ammar El-Hakeem with Ahmadinejad during his latest visit to Tehran 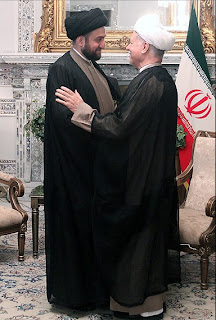 Ammar El-Hakeem with Ayatollah Rafsandjani during same visit to Tehran 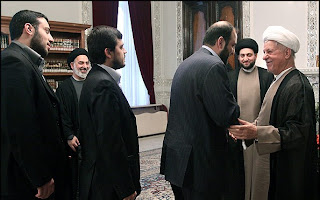 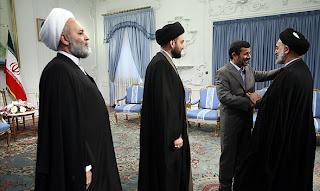 The Shiite psychopath J.Al-Sagheer in white turban with Ammar El-Hakeem and President of Pistachios Republic
When I say birds of Shiite feathers flock together, I know what am talking about and you don't.

I know because I receive daily news about the micmacs and machinations of this herd, with a handful of exceptions. And even then, am not too sure about the exception. Of course, here I am talking about political leaders or men of power...and not about the people. But even then, am not too sure...because as I said before, the influence of the Marjaeeya and Hawza, the Shiite theological councils and schools of learning in Iraq, are so much under the iron grip and ideological influence of Iran, that only rare and secular Iraqi Shias fit the bill of the "exceptional case".

It is more and more apparent that the Iraqi occupation is no longer an American affair but an Iranian one. And the deeper the U.S gets itself in the Afghan/Pakistan quagmire, the greater the Iranian final hold on good chunks of Iraq will be...

If you fail to understand that very simple equation, then sorry to tell you, but you qualify to be called a bunch of dumb asses. And dumb asses should not meddle in politics nor write articles. Got it ?

Now, for tonight's topic, I will give you brief news from Iranian Shiastan Iraq.

- First some BREAKING NEWS : Al-Maliki's son in law - who is an IRANIAN with a long Iranian name I could not memorize by heart, was caught in Dubai airport SMUGGLING IRAQI ANTIQUITIES. A "high level" delegation was promptly sent to the UAE to settle this affair discreetly. Well it is no longer discreet, now.

- Ammar Al-Hakeem, of the SCII, head of the Shiite death squad the Badr militia and one of the biggest oil smugglers to Iran was in Tehran meeting with Ayatollah Pistachios (Rafsandjani) and Ahmadinejad, president of the Pistachio republic.

Those two vultures assured Al-Hakeem who was accompanied by a herd of Shiite thugs, one of whom is another cleric by the name of J.Al-Sagheer (will get back to this psychopath later on) they assured him that

* that they are counting on him and on his new Shiite alliance (the Hakeem, Jaafari, Sadr alliance) to "eradicate all forms of ideologies of mass genocide" referring to the Baath and to promote the only true Islam - Shi'ism.

* that Iraq and Iran share the same sect ideology (aqeeda) and this ideological tie will be strengthened even further...

So in the latest IRANIAN elections, all those Iraqi MP's with an Iranian passport voted in Iran's election. Just as these "Iraqi" Shiite puppets gave well over 2 million Iraqi passports and ID cards to Iranians so they could come and vote in the so-called Iraqi elections.

So with the upcoming Iraqi "elections", some MP's were interviewed. And those with a dual Iranian/Iraqi nationality, expressed in no uncertain terms, and in particular the psychopath cleric J.Al-Sagheer, that they are against and am quoting word for word - " the 4.5 million Iraqis in exile since 2003, to participate in the upcoming election." The baloney reason given was " to preserve the fairness and transparency of the elections and avoid fraud." The real reason is that the greatest majority of those in exile are SUNNIS and CHRISTIANS. And those Shiite thugs want to make sure that no electoral voice tilts the final outcome in the opposite direction i.e AWAY from Shiite sectarian power.

Now you're probably wondering why am calling J.Al-Sagheer a psychopath. Well his Friday sermons are numerous on youtube along with his Fatwas to kill every Sunni with impunity and no remorse, since as per his words they (the Sunnis) are "najiss" - dirty and polluting. And in one of those Friday sermons he said and am quoting word for word "I am telling you, you don't need a Fatwa from me or from anyone else. Go ahead and kill the impure ones, it is no sin for you to do so. And on the day of judgment, wipe your deeds on my neck..." an Arabic expression meaning - I will absolve you.


- a rather interesting interview on Al-Babeliya Iraqi sat T.V was conducted with an Arab Iraqi Shia head of a Southern Tribe. He clearly denounced the Iranian presence in Iraq, however he urged Shiite Iraqis to abide by the not-so great Ayatollah Sistani's (the Iranian) whose one son in law is none but the Shahrestani, (ministry of oil), to abide by the "open list" in the upcoming elections. This Tribal Sheikh from the South said he would favor and encourage his tribal folks to vote for a secular alliance hoping that S. Al-Mutlaq of the National Dialogue Front (what dialogue?) and Eyad Allawi form a common bloc. Otherwise, he and his rather large tribe will join the electoral process as an independent party.

- since am on the subject of Sistani and his family. You may wish to read a bit more on his saintliness, his eminence, the "ayat" (sign) from Allah, the Ayatollah.

A new mini Mullastan has been formed in London, out of all places. Not surprisingly.
This mini Shiastan/Mullastan address is Brondesbury Park, London, NW6.

After pillaging and plundering Ali Baba's cave, those Iraqi Mullahs and their families and off springs, the pious ones from Qum, purchased and keep on purchasing mansions in their new London's mulllastan.

A few names : Al-Khoei family, Al-Najafi, Al-Dabbagh (one of Maliki's men). This latter paid 29 million dollars for the purchase of some commercial estates on Edgware Road. London.

Now Brondesbury Park is experiencing a boom with the following new Iraqi acquisitions by Muntazar Al-Kashmeeri and Mohamed Jawad Al-Sharestani - both, not so grand Ayatollah Sistani's,sons in law.

Al Kashmeeri lately acquired a villa in the same neighborhood, for a "small" sum of 6 million dollars. Al Sharestani, the other son in law, bought another villa on the same street, no.75 to be precise for the sum of 4 Million dollars. But it does not stop here...

The daughter of Ayatollah Sistani has also become a real estate entrepreneur in London's mullastan. She too bought a luxurious apartment not too far from her current one, Abbey Road, St.Johns Wood for the sum of 1.7 million dollars.

The rest of the info on the thieves of Baghdad in Arabic can be found here.

I think I will stop here for tonight with Sistani's family, alone. The pious one from Qum, the Iranian Ayatollah of Nejaf and Kerbala, the head of the Iraqi Shiite Hawza and Shiite Marjaeeya, the well wisher for the invader, the charlatan, the British/Iranian agent, Ayatollah Sistani, may God preserve his shadow and his pistachios.

What does it tell you about the empty "anti-imperialist, anti-zionist" slogans from the "Islamic" Republic, the slogans akin to Fustok fadhee - empty pistachios.

Some of you are nodding your heads and the great majority of you are still swallowing whole, the Fustok fadhee -- the empty pistachios...