Showing posts from November, 2011
Show all

# Notes to Self regarding "Arab Spring" Developments.

November 30, 2011
Developments to follow up on : - Yemen : on the edge of a civil war (Foreign Policy) - Bahrain : opposition asking for the government's resignation - Egypt : 80 wounded in clashes in post election, also seems that US had sent anti riot material to transitional govt and last but not least heavy arguments regarding some breach of trust and hurling of stones between some members of Muslim Brotherhood and Salafists - Syria : the massacres continue and ditto as in Yemen. - Lebanon : rocket "skirmishes" on the Southern border with Israeli retaliation. Lebanese government implicating "Al-Qaeda"- Abdullah Azzam Brigades, an ant- Assad, anti-Hezbollah group (yeah sure - old stale tactic) - Iraq : violence on the rise again, several bombs in different locations of Baghdad including the Green Zone, Mosul and Anbar. Several dead and wounded. Biden on visit there, also Iraq now rated as worst country to live in with worst standard and quality of life. Also more c
Read more

#Notes To Self regarding Syria

November 28, 2011
I am jotting these observations and thoughts down for the record and for the future. I hope I can cover all the points I jotted down in my head first - been doing nothing but reading article after article on Syria, talking to Syrian friends, both inside and outside the country, and engaging some Syrians online to get their version of events. I am also subjected to more vile emails and over 1000 hacking attempts . Hence I feel there must be a good amount of truth in my previous post on Syria. In any event, this post is going to consist of thoughts/remarks/questions and maybe an analysis would deduct itself by itself. This post is for me first and foremost, not for any reader. So am not too concerned here if I make sense to you or not. 1. Spoke to Syrian family who is Christian, they told me that over 150 Christians were massacred in Homs. They believe it is "armed men" who are not tied to the regime, they were told they are bearded - the family did not say it but they im
Read more

The Complexity of Syria.

November 20, 2011
A dangerous and complex situation in Syria, very dangerous indeed. But then so are all situations when it comes to the Arab world. This is an attempt to make sense, and to infuse some light into what will prove to be a dark chapter of Syrian history. I am not sure I will succeed but I will try. I shall base my analysis on my various readings plus testimonies from the Syrians I have encountered. Nearly a 40 year rule by the Alawite clan of the Assad family. Alawites are a branch of Shi'ism, and very difficult to penetrate i.e to access full knowledge of their belief system. A strange combination of Shiism and Druze ideology. Alawites are a minority in Syria, originally from the lower echelons of society. Their rise to power under the Assad rule and their grip on key sectors of government was ensured by placing their own people in key positions, as one Syrian acquaintance said - they have infiltrated Syrian society like an octopus. This is how the Alawites of Syria were able to m
Read more

November 15, 2011
Am surrounded by a strange kind of Silence... From my experience, I can recognize two kinds of Silence. One is because one chooses to be silent, either you don't have anything to say, or you're just enjoying the Quietness in a peaceful sort of way. The other kind of Silence is very difficult to describe in words. The only words I can find to describe it -- a murdered Silence. It's like when you have been badly beaten up, thrashed, shaken in the fibers of your soul, and you are left in that room alone after the event --and everything goes dead silent. It's like the aftermath of a battle in a war zone, when the cannons have stopped, you've survived and you look around and there's nothing but debris, rubble and that strange silence -- a silence that is in between life and death. Not quite the silence of the cemeteries - of Death, neither the silence of Peace. A strange kind of Silence, because the horror cannot be described in words. What to do with all this
Read more

The Shabiha - A Sample of a Syrian Regime Thug. 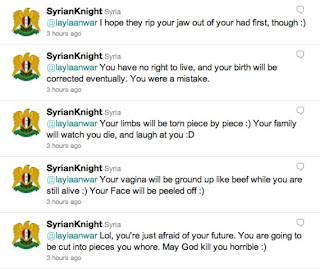 The other day on Twitter, I tweeted some fresh info I had just received - namely that 9 people were massacred in Homs, Syria - on the day of the Eid, among them 2 girls and one woman. These were no protesters, they were unarmed and they were targeted by Shabiha snipers while crossing the streets. I will not go into the tens of videos that are streamed daily on uruknet.info of the brutality of a regime who despite its tanks, air power, and weapons is still powerless in the face of a brave people who are daily risking their lives and exposing the utterly vile nature of the beast. So in response to that particular tweet, I had someone calling himself a "Syrian Knight" a supposedly "patriotic" Syrian on Twitter, obviously on government payroll and most likely part of the Allawite clique respond to me in the following : I must also add that a few other Syrians and Lebanese are openly calling for THE GENOCIDE of SUNNIS in Lebanon and Syria and also for the ass
Read more
More posts