Showing posts from February, 2012
Show all

February 26, 2012
I haven't written in quite some time...it's not that am uninspired ...or maybe I am uninspired....or maybe too much is going on and an over flowing jar has the same effect as a jar with too little...besides I don't like to fill pages for the sake of filling pages...so I abstain. Abstinence from writing is like abstinence from cooking...you need to feel the hunger to want to cook, write again...and I haven't been hungry for words...except maybe in the past few days...no actually it's been there for quite some time. Am in the regular habit of buying myself flowers...some sort of ritual, if you like. And every time I go to buy some, I spend a generous amount of time smelling the flowers, I go from one bouquet to another and then back to the first bouquet...florists usually get irritated with me...but then they are not the only ones... I like to take my time in buying flowers...I like to feel them first, establish a rapport with them through my senses, then decide
Read more

February 02, 2012
I can't go to sleep before saying what I need to say about Syria. This is NOT going to be a political post. This is going to be just about me and Syria. I can't begin to tell you the depth of sadness I feel for what is happening to Syria and to the Syrian people. Again politics aside, I can't bear to see this lovely country go to pieces. I know Syria relatively well. Syrians are not an easy people, they are smart, crafty and know what they want.  They are not easily fooled, and once they like you, or "adopt" you, they are loyal people. But it takes them a hell of a long time to like you. People have always underestimated Syria for various reasons...they were dead wrong in doing so. Syrians are not to be underestimated...at all. I personally have an affinity with this country...for so many reasons...first and foremost because it is Arab, yes, am that way. I care for Arab countries even though they never really cared for Iraq. But then Iraq is known to be as g
Read more 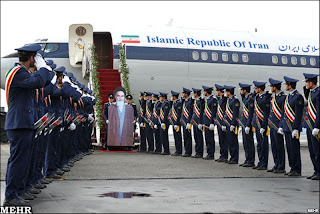 I am not sure if I have to laugh or cry...but I've decided to laugh.  Even though none of it is a laughing matter. But frankly how can one not laugh at this or that or maybe that one Hahahahahahahahaha, hahahahahahaha, hahahahahahaha These pictures are REAL, cardboard Khomeini to commemorate the Iranian "revolution", maybe we need more similar cardboards to salute all the Iran lovers and her "revolutionaries". How about we have another cardboard for Maliki PM of Iraq, exiled in Iran and installed by the Americans, or maybe another one for the sectarian ethnic cleanser Muqtada Al-Sadr, still studying "theology" in Qum, and another one for Sistani the Persian Ayatollah crook, and one for ...keep adding....fill in the blanks with the names of  all the Shiite puppets of Iraq who landed on American tanks from IRAN. We must have another one for Seyyed Nasrallah of Hezbollah, with a halo over his head instead of a turban...since we
Read more
More posts