Showing posts from June, 2010
Show all

Iran, Turkey and the Arabs...

June 27, 2010
Was watching an interesting interview on Al-Jazeera Arabic. The guest is a Kuwaiti professor, a political analyst and an ex MP who was basically kicked out of the Kuwaiti Parliament and who goes by the name of  Abdallah Al Nafissi. The discussion revolved on the rise of a new regional power - Turkey, as a competitor to Iran, what will be the future developments and consequences for the Arab world, and what role the Arab countries should capitalize on in view of this new balance of power. I have several comments to make and I am not reiterating what this Kuwaiti analyst said. Rather, I will use the above theme as a basis for some political reflections. First, it seems that the Kuwaitis, but not only, the whole of the Gulf countries, are waking up to the fact that Iran, with its DOUBLE political discourse, is very much a threat, not only a political threat but a historical threat. It also seems that finally, the Iran-Iraq war, and its necessity in thwarting Iranian political advance
Read more

Portrait of an Iraqi Hypocritical Opportunist as a Young Man...

June 25, 2010
I am always complaining about the hypocrisy of other people, but I have not forgotten my own - that of Iraqis. Hypocritical, opportunists, double faced, pieces of shits is what a good deal of them are...I have no illusions about them...sure there are a few good ones left...they were true throughout, some have atoned and redeemed, after having spilled much blood - innocent blood, and some, sorry to say for the most part Shiites (a horrible hypocritical two faced ideology when thoroughly studied) and a good deal of Kurds (who will never be accepted by anyone except the Israeli Jews - their natural racist cousins and allies), have remained on course...on track... The shoe polishers, the bend over sex slave boys of the Occupation is what they are...They have no pride, no dignity and no honor and calling them Iraqis makes me sick with disgust. They are the tumors of Iraq, the malignancy that has eaten away at the Iraqi body. They are the parasites of not only the occupation, but they ar
Read more

Acceptable Parameters or the Dialectics of Resistance

June 20, 2010
I've just read this piece by Arthur Silber - Memo to the Victim s . A powerful essay indeed. He kind of nails it, not fully, but quite, enough to make the reader think...hopefully... I say not fully, because he uses the "class" concept...I say it's beyond class...It's all encompassing this divide. Class does not cut it no more. You've got to read his essay. He says what I've been saying all those years. The "victim" is allowed to protest only within the defined parameters imposed upon it. I use the word IT here with deliberation. Because the victim is ultimately objectified into an IT that needs/must fit some category. Some ordained, classified  prerequisite. An acceptable pigeonhole., if you like... Arthur Silber in his essay was referring to the Spill, or taking the Spill as some starting point. Oh that famous spill, and the world stopped. I, on the other hand am referring to invasions, to occupations... He worded it from an America
Read more

June 18, 2010
Watching TV is not a good idea...it makes me see Red. All is devoted to the BP spill... Believe it or not tourists from other states, like Texas are flocking to visit the spill... Americans are now complaining of "lack of Ethics", kid you not. Now Americans know all about Ethics because shrimp, oyster and crab farmers have lost their jobs.  And small businesses complain that 20 Billion dollars compensation is not enough. They want guarantees for the future. What if BP runs out of money - they say. American jobs and lives are ever so precious aren't they ? Congress has grilled BP's CEO, with the usual American moral high ground position, the hypocritical attitude that is so characteristic of Americans. Makes me shiver. And the best bit - J.Biden taking on the plight of the poor people whose income is only 10'000 dollars a month like those seafood farmers in Louisiana.. Is that not the same J.Biden, the war monger who wanted Iraq divided so it can be
Read more

Back to the Recycle Garbage Bin.

June 16, 2010
Please do so, please go and recycle yourselves, turn yourselves into some compost, after all you are biodegradable like everyone else, or did you think you were made of some special material that will last for ever ? Oh no rejects of a people and countries, your natural place is in the recycling TRASH, for you are indeed trash, junk, garbage... The Human race is afflicted with hypocrisy but nothing beats the hypocrisy, double standards and crimes of the Western people/countries and at its head is the United Snakes of America. Oh now the Americans have become so environmentally, ecologically minded huh ? Gulf spill and all. Oh so now they are worried about the ecosystem, and the small hard working people huh ? I feel sorry for nature -- for the sea, its shores and what it carries in its belly, as for you, I don't give a damn what happens to you. You see -- nature, earth, waters, skies don't belong to you. They never did, they never will...and maybe since you have bee
Read more 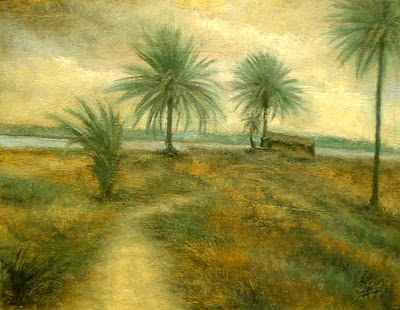 I went for my usual walk...my own way of gathering my thoughts, because sometimes my head is all over the place. And that's why, when someone asks/tells  me -- don't you feel alone, you seem so secluded most of the time,  my standard reply is -- you are never alone with your thoughts . I suppose my head keeps me company, or more aptly, my reflections keep me company. And this is the kind of company I usually don't mind... Had I been with another person during this afternoon walk, I would have never found out what I found out today. I would have been too busy listening to the other person's chatter - woes and wishes...and the obvious would have eluded me. Truth always lies in the obvious, in the simple facts...I know it's too complicated to understand sometimes, but the problem lies not with simplicity but with your heads. I noticed that oneof the owners of one of the houses I usually walk past, has planted a couple of palm trees right outside his house gate
Read more

Lonely Silent Screams in the Dark...

June 12, 2010
I have already written about Raouf, my relative...the way he was tortured, the way he faced what he thought to be an imminent death, I even posted pictures of his body, and called it the New Map of Iraq . It's been several years since the "incident". Calling torture an incident is shameful but forgive me, as words are eluding me...since the ordeal, since the survival, since the humiliation, since the pain, since the silent screams...since...it's been 3 years, but it is still very much alive in his veins, in his body, in his mind, in his waking days and in his nightmarish nights... I need to recapitulate, go over the events, like he does on a daily basis. Raouf lived in a small house, with a garden on the outskirts of Baghdad...inside his own home he'd wear his boxers and would enjoy sipping a little beer every now and then...he was and is apolitical. Raouf is a dreamer, an idealist, he's into music, poetry, literature, tending his garden, looking after his
Read more

June 10, 2010
This is too brilliant not to upload here. Thank you Abu Al Uns for sending it. This video is a post by itself.
Read more

June 09, 2010
The nice thing about blogging is that you really don't need to tow to anyone's political expectations...and frankly am getting tired of the Flotilla story... Article, after article, after article... Come on folks, did it take the lives of 9 Turks to make anyone realize the despicable nature of the Zionist entity ? I get rather irritated when people get carried away with too much emotionalism. Sure thing - anger is justified, so is the rage...prosecution is called for, lifting/breaking that damned siege is a must...but please let us not lose sight of the bigger picture... Someone once remarked to me - politics are for eagles, not sparrows...and eagles have this capacity to look at the bigger picture, because they can hover high enough... New terms are making their way into the political discourse...just today, I heard of the new TRIANGLE - Turkey, Iran, Syria...In another instance, Erdogan is likened to Saladin...and Ahmadinejad to Cyrus the Great... Please folks,
Read more

Iraq - the Black Hole of Forgetfulness

June 04, 2010
Go figure why I chose this title...maybe because Celine Dion's songs irritate the shit out of me... There is this radio station I like to listen to, they have some good oldies, and yeah I like oldies (sue me) but the unnerving thing is that they play Celine Dion's songs once too many... I remember a particular night, they played over 3 songs from Dion's. At one point, I was seriously considering throwing the radio out of the window. Of course I could have changed stations, but I somehow felt stuck in my utter annoyance and I was not going to bow down...I had to make a statement. Stop Celine Dion's songs. Just stop them. Stop them Now ! Later on I realized the absurdity of my reaction...after all she's just a singer with a squeaky mousy voice and it's not big deal, really...until... Until I found out that those same Celine Dion's songs were being used in Gitmo. I found that out yesterday night, and it sort of hit me...I made the connection somehow, so
Read more

A Lone Book in a Concentration Camp...

June 03, 2010
I have nothing to add to the humongous amount of information regarding the latest Jewish Israeli massacre... And I hail Turkey (with reservations - because no major player however much we may like its immediate politics is a totally benign force). And in some way, if I am to choose between the Persian or Ottoman empire, I would opt for the latter,.anytime... But Turkey aside, this massacre revealed what we have known all along, the total impotence of Arab regimes...and it also revealed the enormous support the Palestinian cause still mobilizes after 60 years of struggle... Al-Jazeera Arabic has a full coverage of the latest Nazi Israeli massacres, actually it has nothing else but this coverage and interview after interview of testimonies from the activists detained and now released... All of the testimonies were touching but there is one that stood out, and that testimony was by Mohamed Vall, one of Al-Jazeera's English correspondents. This guy is not only a journalist, he i
Read more
More posts