Showing posts from January, 2009
Show all

Behind a Storm of Blood... 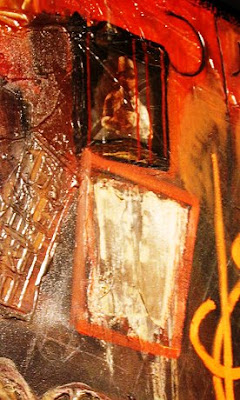 A genocidal tsunami, a Jewish, Zionist tsunami of violence, arrogance, lies, deceit, hypocrisy, racism, apartheid, oppression, repression, brutality, bestiality, tyranny, terrorism, sociopathy, psychopathy, evilness, moral depravity, hideousness, savagery, barbarity, backwardness, inhumanity and you can add your own...add it to the list. Nothing, no word, describes the deep ugliness of the Jewish state of Israel. Nothing at all... Last week, 91% of the "chosen" ones in Israel, were in favor of the Gaza carnage, today the ratio went up to 95%. That leaves 5% of the Jews in Israel against this holocaust. So much for a Jewish conscience! We are on the 22nd day of the Gaza massacres. Piles of bodies, piles of injured, piles of flesh, piles and piles...Auschwitz revisited? No, worse than Auschwitz, much worse, from the so-called "only democracy" in the Middle East. The Americans turned Iraq into a similar "democracy", lest you have forgotten. But tonight,
30 comments
Read more 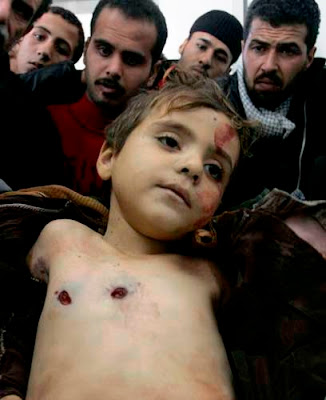 I did say I will not write for the coming weeks, but I have less than 24 hours left... so let me squeeze in a few lines, a few lines for the record, so you can always remember and never forget...As for us, we will never, ever forget...ever. Why do the Zionists of this world, whether they are Americans, Israelis and others...love crucifying children ? Do you remember one of my earliest post, " The Crucified boy and his resurrection " ? Since I wrote that first post, 2 years ago, many have been crucified...in Iraq, Lebanon and Palestine... Every birth is followed by a crucifixion...the same methods, the same tactics, the same Judas... Too many stories to write...too many tragedies to recount. Over 300 Palestinian children murdered, deliberately murdered because this is the Jewish policy, to murder children. Children will grow up to throw stones and shoes and resist the bullets of their oppressors/occupiers. Would you not ? Of course you would. You kill for 1 gram of na
28 comments
Read more

January 10, 2009
I will have very little/no internet access in the coming two/three weeks. Hence expect considerable delays in publishing ; posts, comments and responses as well as replies to emails. Thanks for taking note. Till soon Insh'Allah...
2 comments
Read more

The Future. What Future ? 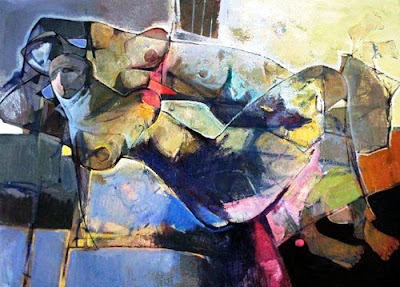 I received a touching mail from a young Palestinian woman, a student, in her early 20's. I am reprinting it with her permission. And to protect her anonymity, I shall deliberately call her Amal, meaning "Hope" in Arabic... I'm Palestinian. My father is from Lid, my mother is from Dayr Jarir I can't breathe how hard I'm crying. I can't stay strong anymore, I don't want to hate. I don't want to. I don't want to do these things. I want to have children. I want to bake for them. I want to teach them how to sing and paint and read. I want them to play. I want my husband to come home and find me happy and healthy and caring. I want life and love. I don't want death and hatred. I don't want barbed wire I don't want bombs, I don't want soldiers or martyrs or anymore blood on soil. I'm full of fear for the future. If this can happen with the whole world watching...what does that mean Ms. Anwar? What does it mean for any colored
19 comments
Read more 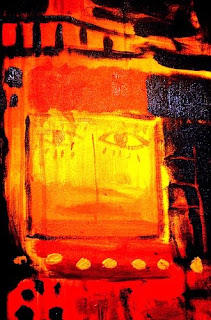 I am fixated on red these days, everything I wear is bright red, not that I have many red clothes to wear...but red is everywhere. I watch it daily, red...red blood pouring down the streets, the hospitals corridors, under the rubbles...tanks and barrels of red...everyone around me is red too, red with anger, with rage...powerlessly red. A red impotence, a red cry stuck in one's throat, a red tear frozen on the edges, on the corner...red. I see red everywhere...reminding me of the red in Baghdad, that has not abated... The Green turns into Red, and the Red into Black...and then Red again... How many more red gallons will it take ? Is Arab blood so cheap ? Bring it down to less than 40 dollars a barrel ? Nah, much cheaper, it has no value and no price...let it pour, let it flow...why not, it is the "other's" blood, the other one, The other one, hardly a name, maybe a first name and maybe a number...but not even. What does it matter ? A Mohamed, a Ali, a Zaynab, a A
29 comments
Read more

Hands everywhere, crazy, raving, roving, hands... Searching hands, cuffed hands, tied hands, amputated hands, hands clapping, hands covering the face, hands denouncing, hands threatening, hands pointing, hands bleeding, hands choking, hands on the trigger, hands on the bomb push button, hands on grenades, hands choking, hands strangling, murderous, killing hands...hands... The most formidable and the ugliest of all creations - "human" hands. Hands down, hands up, hands off ! Hands off this Arabic body, and the hands crawl on it, relentlessly...one day in Baghdad, one day in Beirut, one day in Ramallah, one day in Gaza, one day in ...following the contours of a territory, like hands stroking a body...first lusting after it, then caressing it, then striking it and finally strangulating it... It kicks and moves, and lies there motionless, with eyes rolled up, blank, totally blank...staring at some horizon, a hidden horizon, somewhere up there...somewhere in Death... Hand
Read more
More posts