Showing posts from October, 2011
Show all

October 29, 2011
No system is perfect - that is a given. Even your democracy is far from perfect - instead of a one man rule (which does not exist by the way) you have one clique rule. I don't see how that is any different. In the case of Iraq, depending on which geographical area you are looking at - you have one sect or one ethnicity rule. Baghdad, the center and the South are ruled by Shias and the North is ruled by Kurds. How democratic is that bearing in mind that Iraq is (was) a multi ethnic, multi sect, pluralistic society ?! What have the Shias or Kurds done for Iraq during those 8 years of American "liberation"? What does Iraq look like today? What has it produced, what has it achieved, what model has it shown to other nations ? NOTHING is the answer. Both rules - be it the Shia rule in South, and center of Iraq or be it the Kurdish rule in the North have done nothing but rape the country in a worse way than the Americans have. Prove me wrong and prove the opposit
Read more

Fate, Parallels and the Deity of Hell. 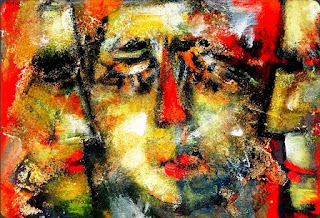 I have just spent over 2 hours watching in details almost every video available on the lynching of the Libyan leader and martyr Muammar Gaddafi. Not that I have a particular perverted penchant for sadism or masochism, nor do I particularly enjoy gory scenes, but it is something I felt I had to do, several times in a row. A bit compulsively, I must admit. I was looking for that one detail, that one image that would make sense of it all... And I found it. The images were somehow not unfamiliar to me, it was as if I saw them before, like a déjà vu. Yes they were happening in Libya but they had this eerie resemblance to what happened in Iraq. It's as if the whole film is being played again, with an uncanny tactical precision, almost scary to see the striking parallels. Even the words used - rat hole, sewage, drain, pipe, spider hole...the superimposition of the same pictures - the naked bodies of Saddam Hussein's sons, those of Muammar Gaddafi's son for public viewi
Read more

An Observer at the Banquet...

October 21, 2011
I never liked gatherings nor banquets...I am allergic to hordes of people rushing to a buffet, gorging themselves with food, quickly stuffing down "all you can eat from 8 pm to 11 pm" I've always found these buffets grotesque. They have always conjured up surreal images of apparently civilized beings in suits and latest fashion dresses, turning into a "modern evolved" Gargantua... There is something crass, like morally and philosophically crass about this approach to eating. Something reminiscent of cannibalism, where you carnivorously appropriate human flesh so as to take on whatever attributes you have ascribed to it. This cannibalism - the eating of living human flesh is closely associated to necrophilia. In case you missed it when he was alive, you can always make up for it when he is dead. There is no better way to describe today's event - the "capture" and lynching of Colonel Muammar Gaddafi. I am beyond politics right now...I am
Read more

October 12, 2011
Of course, you are going to crash, you may stall it for a while but ultimately it's inevitable... Nearly 3 TRILLION spent on the "war on Terror" and you don't expect to crash ? You terrorize the whole world, and you don't expect to crash ? Of course you will crash, and you will crash bad. Very bad. Honestly what did you expect ? Killing thousands of innocent people, families, women, children, elderly and getting away with it ? Absolving, redeeming, atoning with a bit of protest here and there, 10 years on, 20 years on...with a bit of hip hop, a rap song, a forum, a conference ? Why, are other's people's lives so cheap to be redeemed with a hip hop, a song, a forum, a conference, a petition ? Don't rap your shit...I know your shit by heart... You are collectively guilty for the murder of thousands of Iraqis and Afghans...and today 100's of Libyans and no amount of preaching, no amount of sermons, no amount of protest songs will obliter
Read more

It Didn't Happen, It Happened, It Doesn't Matter.

Darwin had this theory of the Missing link, I have a theory of the Common Link. That's just the way it is in the Middle East, to understand what's missing, you need to understand what's linking. As you may well know (I doubt it but let's give you the benefit), Bahrain has been going through a bit of turmoil lately. Turmoil instigated by Iran and Qatar through its Fox News channel Al-Jazeera. Bahrain has a Shiite minority (no they are not the majority as the Western press claims) and Iran since the advent of the disaster Khomeini has always laid claims to Bahrain as one of its provinces, the 14th to be more precise. With the fall of Baghdad, and the empowering of Iran by the USA, I had predicted, rightly so, that wherever there's a Shiite minority present, expect Iran to play the imperial sectarian card of divide and rule. Of course I was mocked then but am here to remind you again... Al Wefaq, the name of the Bahraini "opposition" is funded by I
Read more

The "Negro" of the New World Order.

As of late, I have had a renewed interest in African American speeches, discourses, articles on Race and Racism. I believe that Afghanistan, Iraq, Pakistan and the logical continuation - Libya (as the gate to Africa) have been the trigger. I am unhappy with the current Arab/Muslim discourse on invasion and occupation. I am searching for a more comprehensive framework in which to make sense of this string of "liberations" that has befallen us since 9/11 (official date). I can't, in the space of a blog, get too much into the history of colonialism. I am assuming you have at least heard about it, and it happened not too long, by the way. Instead, I want to use the discursive framework of African American thinkers and juxtapose it to us. By us I mean - us, Arabs and Muslims. This by no means, lessens whatever discrimination African Americans still face today in White American society, but it does however, provide me - me, the discontented Arab Muslim Woman - the nec
Read more

Sorry To Disturb You ..

October 01, 2011
Am so sorry to disturb you...am awake and you are asleep... Am so sorry to disturb your snores and your slumber...I happen to be wide awake. Sorry to nudge you in your coma, sorry to prick you in your amnesia, sorry that am not just laying down watching you breathe...measuring every one of your royal inhalation exhalation, like the good slave that am supposed to be...Am really sorry about that. Did I forget my "natural" place in those moments of insomnia, that gnaw inside of me like hot iron rods, like the sound of drills piercing my flesh, expecting me to hang on a wall like one of your "art" tableaux. It's nearly dawn in the ghetto, I just thought "I'd run my mouth" a little before the forces of law and freedom start ordering me about...before a car explodes in my uncovered face, before I get my early morning silencer gun threat, with my Corn flakes and OJ. OJ is the way they speak...they can't be bothered to say the whole word. They
Read more
More posts