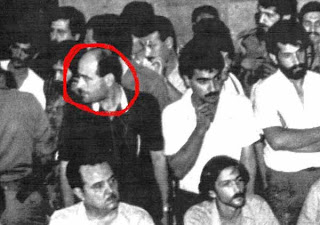 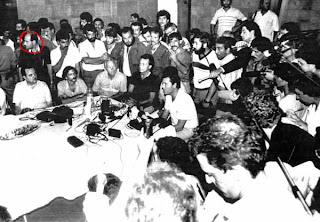 This may not be novelty for some of you, but I thought I'd refresh your memories...

Listen am not inventing the stuff, am just translating what appeared on a serious Iraqi website.

Someone already wrote an expose of N. Al-Maliki, Iraqi PM's past, in 2007 and you can read it here.

Jawad Al-Ali aka Nouri Al-Maliki personal resume in bold, the rest is mine including whenever you see a "Ze" and in (...)

Diplomas : Personally involved in blowing up the Iraqi Embassy in Beirut and in assassinating senior Palestinian leaders in Ze Lebanon.

1- Was in the armed command of the Dawa party, and was personally involved in the criminal murdering of several people.

2- was personally involved in the blowing up of the Iraqi Embassy in Beirut.

3 - Was a member of the "lovers of Hussein" in the 80's in Ze Lebanon. "Lovers of Hussein" was a death squad affiliated to Ze Lebanese Shiite party called Amal.
"Lovers of Hussein" death squad was under the command of Dawud Dawud (a double David)
and followed the immediate orders from the ultimate sectarian Nabih Berri (still head of Amal in Ze Lebanon) and was responsible for the settling of accounts, liquidating and murdering the Palestinian leaders of the PLO in 1982 (during harb al mukhayamat - the war of the camps), the Palestinian leaders and cadres who were resisting the Zionist occupation of Ze Lebanon.

4 - this criminal terrorist's mission (Al-Maliki's) was concluded in his personal involvement in the siege and genocide of the Palestinian camps in Ze Lebanon in the mid 80's.

On that day, the late President Saddam Hussein after consulting with the late Yasser Arafat contacted Michel Aoun and gave him phenomenal sums of money (today's Hezbollah ally) so he may agree to smuggle the content of a whole ship (financed by Iraq) to the port of Jounieh (a then enclave of Ze Lebanese Christians), containing full shipments of arms, food and medical stuff, to the Palestinians. This changed the equation on the battle ground and thus saved thousands of Palestinians from perishing at the hands of the sectarians and prevented their mass genocide.

5 - the terrorist Al-Maliki was head of the "Haidar" group, a cell within the " Lovers of Hussein" subgroup, affiliated to Amal Shiite Party from Ze Lebanon.
This particular cell was known to be the bloodiest and most murderous of all in regards to the Palestinians in Ze Lebanese camps. This cell consisted of over 150 members, most of whom were IRANIANS and all were members of the DAWA party.

6 - this terrorist cell murdered over 50 Palestinian Resistance fighters, officers in the PLO. The Palestinian Fedayeen/Muqawama was able to fight a majority of them off and force them into running away to....(Syria and Iran like the cowards that they are) and one of them was Al-Maliki.

At that time, the PLO was in possession of several recorded tapes filled with whole testimonies from those captured murderers belonging to the Al-Maliki cell. Copies of those tapes were then handed to the previous government in Iraq.

The Americans made the right choice in choosing Al-Maliki, the killer of the Iraqis and Palestinians.

Now we know why the Iraqi flag was not raised when Al-Maliki visited Tehran.

A bit of historical information is necessary here.

Hezbollah is an offshoot from Amal. The Iranians at that time felt that Amal was not radical and armed enough.

The "Iraqi" Dawa party is an offshoot from Amal and by correlation from Hezbollah. Was formed and funded in Iran and nurtured in Syria.

To make it simple for you - Birds of Shiite feathers, flock together....Sectarianism and anti- Arabism and anti-Palestinian(ism) is their hallmark despite and in spite of the rhetoric.


So, dear "anti-Zionists", dear " angry Arab" jerks, dear "Palestinians", may you find Maliki's CV useful should you wish to hire him in the future...after the Iraqi elections that is.

Since you are so besotted with Mother Iran and since you've become so amnesic, I thought I'd facilitate your recruitment task...

Yalla, mash'Allah, don't want to give you the evil eye on your wonderful political stands.