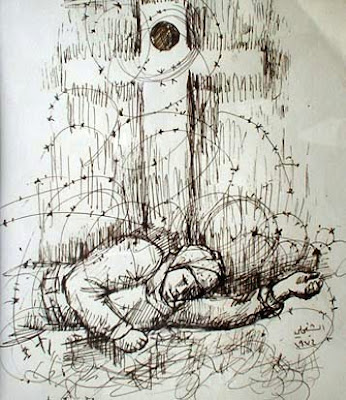 Yeah, another one. Never heard the end of it, did we now?

Eight years ago, two buildings fell to the grounds and the world changed in consequence. Mind you it was not so fantastic before but you got to admit it, it got much worse since...

For starters, I don't buy none of the 9/11 bullshit stories. Too many question marks that remain unsolved.

For starters, I would like to know where did the 3rd plane-- which allegedly fell in Pennsylvania, disappear ? And what about the plane that hit the Pentagon, what happened to it ? Dissolved like salt in water or what ?

But the biggest joke, and this I saw with my own two eyes, is when the CNN reporter straight after the twin towers attack, while people were screaming, rushing with bloodied faces covered with dust and tons of office paper and documents flying all over New York City, the CNN reporter, found Mohamed Atta's passport in the debris and rubbles.

I laughed my head off when I saw this. A brand new passport with not one scratch. He waved it in front of the camera.

And in the parking lot, they found in the cars allegedly used by the hijackers, copies of the Koran - this must have been some recommendation for the 9/11 script provided by Bernard Lewis -- and flying manuals in Arabic.

Leaving aside the question, as to why would anyone want to do this to America -- I mean surely the U.S deserves better. It has had, after all, a very clement foreign policy throughout its history...

So leaving aside the why of 9/11, I kind of reviewed in my head what happened since...

A hundred 9/11's took place, first in Afghanistan, then in Iraq and now in Pakistan...

Millions of innocent people were killed in these countries. Iraq alone beats the Guinness book of world records in 6 years. Thousands of homes and buildings were destroyed, millions lost their livelihoods, millions became refugees, millions are bereft...

Yet we still hear and read about the "terror" attack on New York. And all the others who were slaughtered by American terrorism do not get even one second of silence for their dead...

After 13 years of barbarian sanctions when 1.5 million Iraqis perished, Madeleine Albright proudly said -- the price was well worth it.Imagine anyone of us saying 2'000 Americans dead was well worth it. Yet an official from the American government said it publicly, it went round the world...it was well worth it. No one seemed shocked by this. It was normal. Iraq is after all a "third world country".

Not long ago, an ex CIA man by the name of Charles Duelfer was interviewed on Al Sharqiya satellite Iraqi TV, he repeated Madeleine Albright's quote with a smile.
When the presenter asked him was 1.5 million Iraqis massacred since 2003 worth the price for regime change. Charles Duelfer smiled and said - Iraqis are a capable people, they will get over it.

There are no call in centers for victims of Terror to contact, no long term therapy for the families of the victims and no indemnities either. No courts of law, no judges, no tribunals, no juries to try the terrorists who murdered thousands of Iraqis and destroyed their homes, buildings, infrastructure, society...beyond recognition.

There is something very wrong with the world and its "values". It has none.

Take another example - Afghanistan. This very poor country with an increasingly very impoverished people, who has been through years of wars, first repelling the Russian invaders, and now the Americans and its allies...where thousands of innocent Afghans, entire families and villages decimated, turned into a mass of bones and ruins...it is truly a miracle that the Afghan are still resisting...it is a miracle indeed. A valiant, honorable people for sure.

The American terrorists are still on the loose, there is no Guantanamo for them, no black shadow site prisons, no military tribunals, no forced feeding with tubes, no "enhanced interrogation techniques", no "stress positions", no Abu Ghraib, no Bagram...no justice. No justice for the victims of American Terror.

There is something very wrong with the world. Very wrong indeed.