A Homage to the Falluja ShoeThrower. 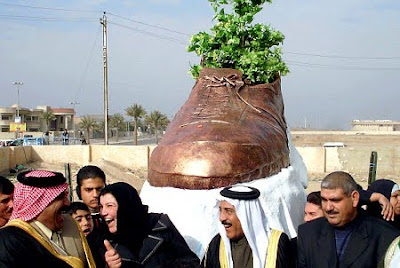 Another Iraqi hero from Falluja, Ahmed, shot by the criminal U.S occupation forces for throwing a footwear at an American patrolling convoy in Falluja.

This is the theater of surreal Absurdity. Imagine someone killing you for waving a pair of slipper or shoes at him. Your life gone within seconds, your family mourning you, and your 30 years wasted in a blink of a eye because you waved a slipper...

Can you imagine that for a few minutes ? No you couldn't possibly. It is beyond imagination. It is the theater of the Absurd, where Iraqi lives have become so cheap, little flies hovering and pfftt gone...like with Pif Paf, the insect repellent, spray them...spray them...with bullets...and we have been sprayed since 2003, like insects...

There is not one motherfucker out there who has been able to answer this simple why.

Hundreds of articles and none are convincing. None.

No you would not realize it. You realize nothing.

You gulp down articles and stories like bulimic maniacs, but you don't think and you don't feel...you just jump swiftly to make a comment, send a mail, or write another article...but inside it's pfftt, sprayed empty...

But you can preach can't you? Oh and how, the sermons, that I know too well.

Like this dumb fuck, who sent me a mail the other day, telling me that I had nothing of a Muslim, not just because I use swear words like dumb fucks, which you are, but because I was - and check this out - stirring hatred against the Americans.

Another irony, this dumb fuck happens to be an 8th generation blue eyed blond American Muslim, as per his or her claims. I can't tell if it was a she or a he, because the pseudo used came from Starwars. And I don't watch American shit. There is enough of your pollution around, I don't need to go and ingest more of your crap.
But I have a feeling it is a she, because the all too familiar whining and arrogance of American females came across quite clearly in this thing's mail.

Fortunately, for me, you are beyond my shoe...beneath it. You are beneath every Iraqi's shoe. And you deserve all the shoes you can get, you and your presidents...

Ahmed Al-Jumaili, a mechanic, understood that. He understood that only the language of the shoe and what it symbolizes is fitting for you. He got shot for it.

There are two versions to the story here. One says he was a 32 years old, mentally deranged and was shot by the American psychopaths, because they thought it was a hand grenade when it was a shoe. The local police rushed him to the hospital and he died from his gun wounds...sprayed with bullets...with a shoe in his hand.

But read this absurdity and let some Hollywood dickhead turn it into a film.

"The U.S. military did not say in its statement what the thrown object was, and in response to a request for clarification said the object had not been recovered.

The Marines who saw the object thrown at the vehicle identified it as a grenade," spokeswoman 1st Lt. Rachel Beatty said."Because the suspected grenade was not recovered, we do not know why it had failed to function."

However, a Fallujah police officer, speaking on condition of anonymity because he was not authorized to talk with the press, said al-Jumaili had only thrown his slipper.

(no wonder the grenade did not explode nor was it recovered, it was just a fucking slipper)

"I saw him throw his shoe while the U.S. soldier was looking at him," Hussein said, adding that the act was out of character for al-Jumaili. "He was always so calm, I never saw him behaving strangely. Al-Jumaili, a 30-year-old auto mechanic, said he ran after throwing his slipper, but was slowed after a bullet grazed his leg."More bullets were fired and one hit me from behind and went through my chest, and I fell down," he said from the hospital..

So what do you think, Oh "peace loving, decent folks" ? Did your psychopaths see Ahmed holding a slipper or not ? Or are they lying again ? Of course they are. Psychopaths lie. Just like you do. You lie all the time. You lie to yourselves and to the world. The people of the Lie.

Truth is Ahmed Al-Jumaili was deliberately shot at, not once but several times.

I suppose in your sick constipated minds, and in your political correct constipated language, Ahmed was stirring hatred too.

Hip Hip Hooray for your "culture".

Excuse me, I need to go and vomit again. I am glad I somatize instead... otherwise I would have gone insane.

Pif Paf, I want to spray you out of my life, our lives...

Don't write to me anymore. I don't want to read your words, good or bad. I want to have nothing to do with you, at all.

I am like Ahmed Al-Jumaili when he spotted you in Falluja. I can't bear the sight of you. I have no shoes to waste on you. I care for my shoes. They come high on my priority list, much higher than what you think or feel, much higher than you. No, will not waste my shoes on you...

Which reminds me of two sayings. One is an Iraqi folk - When the shit hits the fan, we say "It's raining shoes". And my dad used to tell me jokingly, years ago, he used to say "The one who does not die by the sword, dies by the shoe..."


Picture : Bronze Shoe statue erected in Tikrit, in homage to Al-Zaidi, then torn down since, from fear of hiding explosives - WMD's.