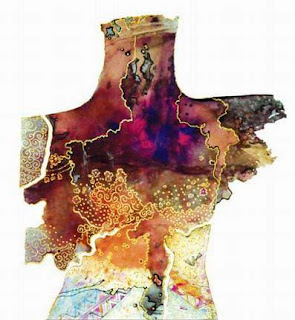 First I need to apologize to the reader for not having put Muntazar Al-Zaidi interview in a post form and I want to thank Uruknet for having copied my tweets in the right chronological order. It is a hassle. So your effort is greatly appreciated. Thank you.

I want to focus in this post on one sentence that Muntazar Al-Zaidi used to describe his torturers, which were the security apparatus of the puppet government.

He called them - The Iraqi Zionists. Referring to Al-Maliki and his guards.

I need to draw your attention to the fact that this last interview was conducted by Al-Jazeera in Baghdad. I can assure you 100% that Muntazar Al-Zaidi who is still my hero, was released and could only say what he said because he had the backing of another influential party in Iraq. He had refused to name it during the interview stressing that he does not belong to any party. Which might be very well true. But my hunch and it is not just a hunch, tells me, that from early on, the Sadrists were backing Al-Zaidi. Moreoever, the Baghdadia channel he worked for, is said to be funded by the Sadrists.

The Sadrists is the polite name for the Drillers of Baghdad. The thugs loyal to Muqtada Al-Sadr, that fat sectarian bastard, still studying to become an Ayatollah, and still hiding in Iran.

I reiterate, that does not make Muntazar Al-Zaidi less of a hero in my eyes. If I were in his shoes, I would even accept help from the devil himself. Which he did.

Why am telling you all of this ? Simply because I am hoping that you will think a little further than your noses and come to the obvious conclusion that had Muntazar Al-Zaidi or any other detainee not have the backing of a Shiite party, he would be still rotting in jail and most likely dead.

And that is why ladies and gentlemen, non Shiite Arab Iraqis, in the thousands are still rotting away in jails with no trial and simply detained because of their sect - which for the most part is Sunni.

This also tells you that Shiite sectarianism is ENDEMIC in Iraq, alongside Kurdish chauvinism. And I can already tell you in advance there cannot be any national reconciliation because the inherent new structure of governance is both deeply sectarian and racist/chauvinist in nature.

Corruption is also endemic again on sectarian lines. Meaning that at the higher echelons, from the "state apparatus" to the parties, to the ministries, to the police and so called Iraqi forces, sectarianism and corruption go hand in hand. There is NO RULE of LAW since the courts themselves and their judges are equally sectarian and corrupt to the bone.

The situation is not any better in so-called Kurdistan. I need to remind you again, that the despicable shameless Arab left supported an independent Kurdistan, i.e supported the partition of Iraq.

In the appropriated lands that the Kurds call Kurdistan, corruption is equally endemic so is the terror of speaking out against the warlords Talabani and Barazani and their clans.

Chauvinism of the Zionist kind, is felt throughout Iraq, be it in the Kurdish or non Kurdish regions.

In the province of Nineveh and in Kirkuk, the situation has deteriorated so greatly, that a person interviewed said, "we have never seen it so bad in 20 years. This is the worse it has ever been."

In these two regions there are NO SERVICES at all. Forced expulsion by the Kurdish Zionists is the norm, aided by the so-called Iraqi forces and American criminals.

Today, an Iraqi who is not a Kurd cannot drive to Erbil or Sulaymaniya without showing his passport. He needs a fucking visa. The so-called Iraqi Army is not allowed to enter the "Kurdish" areas without authorization from the Peshmergas. Not to mention the very palpable ISRAELI presence in so called Kurdistan. Chapeau to the despicable left !

In Baghdad and in the South, unemployment and poverty are staggeringly high, even the food ratios are being controlled by the shiite parties so they can trade in them and make a profit from those in need, there is a total collapse of basic services -- people still get 2 hours of electricity a day, there NO drinking water, agricultural wastelands and whole farming industries have stopped operating substituted by a heavy reliance on imports for EVERYTHING, mainly from IRAN.

Mainly from Iran, since those who trade are ALSO Shiite party members and the ministry of Trade is run by another Shiite. And the ministry of education and planning and energy and electricity and health and oil...

In other words, if you are not a Shiite or a Kurd in Iraq, there is no place for you.

You have two options, either you embrace Shiism of the Iranian political kind and await their Mahdi with them, or the doors close in your face. You are left unemployed or worse still detained for no reason except for the fact that you are a non Shiite.

So for me, as an Iraqi, this the face of Iraqi Zionism, a product of the American occupation.

Really, it is so glaringly evident. Iraq is experiencing Shiite Iranian and Jewish Israeli -- Zionism, at the same time.

Yet the silence surrounding the Israeli-Iranian Zionist appropriation of Iraq is deafening.