Updates on the Iraqi "Elections" 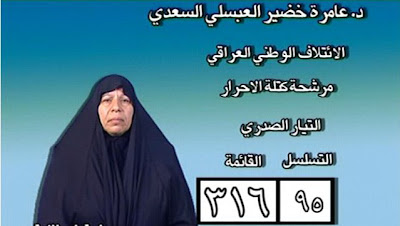 Following my previous posts here and here on the same subject - will need to update you with some "fresh" news.

But before doing so, I have to say that Al-Arabiya has a very good coverage of the "runner up" (more like runner down) re. the Iraqi "elections." Al Jazeera both Arabic and English is terribly lacking in its coverage. But as I have said in the past, this stems more from its pro-Iran political agenda, hence the news regarding Iraq are kept to a minimum and whenever possible, ensuring that no overt anti-Iranian allegations are aired...Shameless Jazeera !

Anyways getting back to my little coverage of the so-called elections.

Why am I doing that when I myself don't believe in any of it ? Partly because by doing so I am showing the fraudulent nature of the political process and its election under occupation, am also keeping track of the daily killings and violence that Iraqis are subjected to since 2003,  am also able to have a good feel of what is happening and will be happening in the election's aftermath, and because this gives me a reliable knowing of what the Iraqi street thinks, and from  reading the official statements I can tell the extent of Iran's involvement in the current political process and last but not least  because there is a comic aspect to it that never fails to make me laugh...

Having said that, let's get down to business...

Again, there is so much to cover and I can't do all of it, so I will give you headlines...the ones I feel are most important. And as usual, I am hoping that you will use your "intelligence" (if that's not too much to ask) and of course I urge you to read between the lines...which am hoping you have learned to do by now...

The following is in NO chronological order, I am dealing with tons of information that I need to distill  AND translate --  so be indulgent and don't expect a "journalistic" format.

-  A martial law/curfew will take effect in all of Iraq, starting on the eve of the 6th of March and that for 48 hours. That will include the closing down of ALL borders, airports, streets, etc...(some democracy huh !)

- Killings continue in Baghdad and its provinces. In Baghdad,- Hurriya district, 4 women gunned down by the silencer, Baghdad's morgue is receiving more bodies -  total number so far 70,  killing of a judge by the famous silencer and the number of judges killed since 2003 according to the puppet police is 15.

- a cheap ploy by Al.Maliki's government in encouraging 20'000 members of the ex-Iraqi army to apply for jobs in the government. A cheap ploy and a dangerous one because last time a similar offer was made, about 2 years ago, hundreds of ex army officers presented themselves for their pension and were murdered in broad daylight in front of the ministries. So if any of you are reading this - make sure you don't fall in this trap, however difficult your situation is now.

-3 mortar shells  fell on the Green zone and a "rain" of mortars fell on an unused airport now transformed into a joint American/Iraqi base in Al-Ammara in Mayssan province - Southern Iraq.

-  Diyala - a US convoy was attacked with road explosives.

- On the Kurdish front a serious split is taking place. A splinter group from the PUK of Jalal Tabalani calling itself the Party of Change is now in some alliance with the Kurdish Islamic group and a few Kurdish communists, their main grievances - lack of transparency, corruption and dictatorship by the Kurdish leadership.

On another note regarding the Kurds and this is an VERY IMPORTANT POINT  so pay attention please.
In the past the Kurds managed to secure about 58 seats in the Iraqi parliament, this time around, they are aiming for more seats BECAUSE - MOSUL, KIRKUK and a part of DIWANIYA are placed under the Kurdish electoral list.

- Snoring General Odierno has made a special preliminary request to Obama to keep a good number of troops notably in KIRKUK past their deadline to secure "peace in the area". Obama has given a preliminary OK.

- VP Tariq Hashimi  during his visit to Egypt stated that IRAQ needs an ARAB government. (No shit - Did he just discover dynamite or what ?!)

- Al- Lami  (Chalabi's best friend) of the Justice and Accountability committee has not only banned Saleh Al-Mutlaq from the elections but is presenting him to Iraq's Higher criminal/penal courts. Dr.Al-Mutlaq  has been urged by people who support him to leave Baghdad for his own safety,  something which he refuses to do...

- Security devices for detecting bombs all turned out to be obsolete - brand name Sonar. Commissions made by members of the various sectarian Shiite ministries, out of these worthless devices -- 29 Million dollars.

- VOTING CARDS  & FRAUD : I did mention that the number of eligible voters in Iraq is 18M, today they're saying it's 19M, in the space of one week the number of eligible voters has increased by 1 M ! That's what I call a rapid growth society! Anyways, for 18 million  or 19 million eligible voters -- 26 Million voting cards have been issued. (see my previous posts) but today I learned that another extra 7 Million cards are being issued over and above the 26 million ones. Wait, wait, it's not finished yet.  There are 50'000 voting "bureaus" (more like kiosks) and for each voting bureau there will be an extra 50 electoral voting cards just in case. No one says in case of what. So that means a total of 2.5 million extra voting cards over and above 13 million extra voting cards (source in Arabic Al-Sharqiya ). I am assuming that a quarter of Iran's population will be voting with the Iraqis !

a) Forgery - about 1 million dollars fake ones are being distributed in the South to secure votes.

b) Bribes have become very common, millions of dollars are being paid to secure votes. In the South alone, over 14 million dollars have been paid out in bribes. But not only in the South, in the whole of Iraq.
Candidates are taking advantage of the fact that the majority of people are in dire need so they buy their votes that way.

But not only in Iraq. In Western capitals and in mosques frequented by Iraqi Shias, the Dawa and other sectarian parties are giving out money and making the "faithful" swear on the Koran to vote for them.

Back to bribes for securing votes in Iraq, some candidates in the South have also promised to make available free bus ride transports to the electoral "bureaus"and back. One candidate went as far as distributing several cartons of EGGS to secure votes, while another female candidate distributed female lingerie specially bought from Baghdad ...and me who thought it was only American feminists that promoted panties for the "war effort".

Yalla, see you in another round of the Iraqi circus...

Picture : courtesy of the Iraqi National Alliance of Iran.