Short Reflections on the Iraqi Resistance... 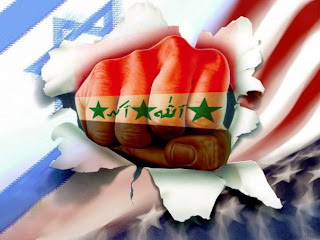 I feel a little guilty underestimating the formidable resistance put up by the true Iraqis.
This is not so much a Mea Culpa..ok, maybe it is...but not only...

Two things made me open my eyes...

One is a video called the war within on US "combat stress" or PTSD, which I urge to watch.

There are many angles to this video. For this post, the angle I will stress on is the Resistance put up by the Iraqis in the face of the Occupier.

No media outlet will tell you about it, but the testimony of U.S soldiers suffering from "combat stress" does.

Second thing, is information on the icasualties website, run by an American by the name of Michael White.

On this website there are two tables. One for Iraq and one for Afghanistan.

These figures led me to the following :

1) U.S occupation of Afghanistan has been around longer (2 years) than the Iraqi one and with less casualties for the Occupying powers.

2) There were more surges in Iraq and a greater total number of US and other forces deployed than in Afghanistan. At one point the total number was 650'000 troops and other personnel. (US/UK/contractors/special forces...etc...)

3) There was and there is in Iraq not less than 13 intelligence agencies (spying networks) working for different countries.

4) There is in Iraq 43  armed militia groups tied to the Shiite sectarian parties.

5) There is in Iraq 126 "contractors and security "companies

6) There is in Iraq a much greater number of dead, maimed and exiled than in any other occupied country.

7) There is the geography - Iraq for the most part is a "flat"country except for the Northern parts controlled by the Kurds. i.e meaning that from a military strategic point of view it is much easier to spot "the enemy" in comparison to Afghanistan which is a mountainous geography.

8) There are no Shiite death squads, no Al-Qaeda, no overt Iranian involvement  (as in Quds Brigades and other Iranian special forces) in Iraq as in Afghanistan.

9)  There was/is no ethnic/sectarian cleansing in Afghanistan as there was in Iraq.

10) There are no Kurds backed by Israel  in Afghanistan as in Iraq.

11) There is no sizeable Christian and other minorities in Afghanistan as in Iraq i.e Afghanistan is more homogeneous than Iraq.

12) There are no oil fields and Afghanistan is not the second largest oil reserve in the world like Iraq.

And I can go on and on...about levels of development, infrastructures, state institutions, armies, industries, education, history, etc....

This is NOT a comparative study between Iraq and Afghanistan.

My aim is to point out the following :

Again, go back to the casualty figures I  noted above....taking into consideration, all the points I have enumerated ....

Why do you think it is so ? Why do you think that the Iraqi Resistance has been so demonized, occulted and denigrated as some "terrorist" "insurgent" force...why is it that the Talibans have not been vilified to the same extent ?

Why is it that the Iraqi Resistance has received no support from anyone, for 7 years now. Why does it stand alone with no backing ? And with epithets stuck to it "terrorist" "jihadist" saddamist" and the rest....

Why has the Iraqi resistance been so denigrated, so abandoned, so neglected, with ZERO support while other resistance movements like Hamas or Hezbollah who do NOT face as a formidable opponent in terms of numbers, weapons, agents, contractors, etc...and whose social base has NOT faced as many dead, maimed and exiled --- gather so much support and not the Iraqi Resistance ?

The valiant, heroic, noble, Iraqi Resistance is at the front line ---  at the front line of the battle field, facing the most "mighty" power on earth...the most mighty power with its technology, its arms, its sophisticated weaponry  its thousands of agents, its multi million dollar budgets, its reconnaissance units, its satellites, its "civil" servants, its NGOs, even its "peace" groups...

So why has not the Iraqi Resistance received the praise it deserves ? Its resistance to an illegal, vile, savage, barbaric occupation is proven in figures. It has outnumbered Hezbollah of Iran, Hamas and the Talibans...

So why is she shelved into forgetfulness ? Why is she not given the respect she deserves ? Why is she not crowned with bravado like others ? And most importantly why was she left alone for 7 years, with zero support from anyone ?

Why is Iraq and her sons and daughters so demeaned, so denigrated, so underestimated,  in their struggle, in their efforts, in their plight...?

What is your excuse now ?