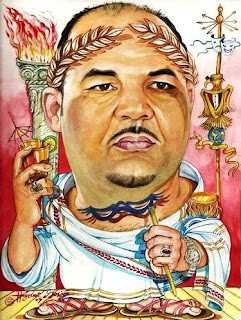 I don't have time to transcript the whole of the Al-Arabiya interview with the puppet PM Al-Maliki. And besides, I can't be bothered, he bores me to tears and his finger wagging reminds me of a drooling, salivating dog's tail basking in the limelight of some "celebrity".

Puppets are usually comical and this one is no exception. Except what is happening to Iraq is not funny at all.

But I will give you a summary of his garbage. And in no chronological order.

When asked by Elie Nakouzee, another hair gel covered head, Lebanese style, if his Excellency, Il Imperator waged the battle of Basrah in preparation FOR the Battle for Mosul this is what Maliki had to say.

I think I proved this is not a sectarian government. I proved it over and over again. All gangs will be dealt with in an equal fashion. Be it in Basrah or Mosul. And the battle for Mosul will happen in the coming days. The AQ are bandits infiltrated by Saddamists and they will be finished off.
What I've done in Basrah proves that I am not a sectarian. The Shiites and the Sunnis who don't uphold the rule of law will be treated the same way.

He added that initially he did not intend to wage a battle in Basrah. And that it was decided in 4 days only. Last minute kind of thing. What he had in mind was to "visit" Basrah and stop the gross human rights violations that were taking place there -They still are taking place your Excellency - and to stop the smugglers and the gangs from controlling the port of Basrah and from destroying government institutions.

When asked about his relationship with the Sadrists and the fact that Muqtada Al-Sadr claims that it's thanks to his party that Maliki got to power, this is what the puppet had to say.

Is the chicken from the egg or the egg from the chicken ? I embraced the Sadrists and gave them 5 seats from the DAWA party, offered it to them on top of the seats they already had. Muqtada says it's thanks to him but I say it's thanks to me that they joined the political process.

The reader can have a glimpse how the "Iraqi parliament" functions. Maliki gives seats to the Sadrists. Sounds more like a vendor in a kiosk, and not a Prime Minister for sure.

He repeated the following many times during the interview.

The Sadrists are our brothers, my arms will alway remain open to them. They have sacrificed a lot in the name of the great Sadr and the Mahdi. I am not against the Sadrists or Muqtada Al-Sadr, I am against the gang/criminal elements inside the Sadrists. They have been infiltrated by members of the previous regime, by Saddamists, and they need to purify their ranks. These Saddamists are the ones who are making alliance with the smugglers and gangs in Basrah. I want the constitution to be applied against these gangs. Muqtada Al-Sadr needs to purify these criminal elements from his ranks. But the Sadrists are our brothers and will remain our brothers.

Ironically Al-Sadr said the same about Maliki's party being infiltrated by Saddamists and gangs. And that Maliki needs to uphold the constitution.

What consititution? Would someone please tell me. What law and order? We are ruled by the dirtiest mafias ever. And our plight is falling on DEAF EARS.

When asked about the Sahwa

He said "What Sahwa ? The role of the Sahwa is over. The only leadership is that of the government."

When asked about Iran and if he still has 70 Iranian advisors working for him. something he admitted in a previous interview. Maliki said

I am not anti-Iran nor anti anyone. I am an Iraqi first and my concern is for Iraq and Iraq alone. I ask all countries and outside parties to stop meddling in Iraqi affairs, not particularly Iran.

Maybe Il Imperator needs to get rid of those 70 Iranian advisors first. Don't you think?

Concerning the Iraq Summit in Kuwait, this is what Maliki said.

I have already proved to the Arab countries that I am not a sectarian, and I urged them to write off the debts. I think they are now convinced that these debts are all due to the previous tyrannical regime who fought wars against Iran and Kuwait and that the Iraqi people had no say in those wars. Iran and Turkey have diplomatic ties with Iraq, why can't the Arab countries do the same?

Maliki, of course, conveniently omitted to mention that Iraq is still paying IRAN reparations. And that the Arabs still consider his government as a tool for Iran.

When asked if Maliki requested the Brits to withdraw from Basrah

This is not true. It's up to them if they wish to withdraw or not. I am absolutely confident that the Iraqi forces are ready to take over both Basrah and Mosul and the rest of Iraq. But it's up to the British to decide what they want to do with their troops.

Any last message to the Iraqis, he was asked

My message is a patriotic one. My loyalty is to Iraq first and foremost and I will not spill one drop of Iraqi blood in vain.

And thus the puppet Imperator spoke...


P.S: By the way this is not Maliki's portrait. He is not that handsome. But it's close. The silver rings and all...

Layla Anwar said…
The picture is very funny...hahahahahah
The second link doesn't work by the way.
1:07 AM

Anonymous said…
Today the only leader in the world who cared about Iraq and Iraqis would have turned 71.
He could have been still alive, healthy, strong, charismatic as ever, fit to lead the Revolution for some more years.
Instead... the Lion is but golden dust by now, while a little insignificant baboon like Maliki is still stealing the air of the living and treading on mother earth's bleeding womb...
WE SHALL NEVER FORGET.
10:22 AM

Anonymous said…
Layla Anwar, which is your happiest memory of Iraq and which your most painful ?
12:32 PM

Anonymous said…
IRAQI MOJO IS LOOKING FOR A BRIDE !
6:55 PM

The above link shows that certain Union workers for Vermont, USA are going on strike on May 1st apparently to protest the 'war' on Iraq.

I was reading along and thinking 'ok..ok..yeah..' and then near the bottom was that they make a complaint on how much the war is in monetary costs. hahaha

So THATS what they are launching a strike about....about all the muhhhhhhney being spent. Poooooor babies. These beer-drinkin bastards probably have an ass the size of a well fed government mule and could stand to ration their caloric intake.
12:59 AM

That's funny. lol
And yes you're right, the Americans will only complain about the war if the oil barrel hits 250$... even then am not sure they will have much impact. Too numb and too little too late.
1:34 AM

morris108 said…
The brits are on an oil strike in Scotland, and are unwittingly supporting the war.
The strike doesn't make any sense, unless perceived as the oil men blackmailing the UK Govt to make more war.
It is a strike started by the oil industry, with the power to wreck havoc on the UK. In other words to bring the Govt. to its knees.
And the strikers, well football and beer ....
The oil men like Iraq.
http://morris108.wordpress.com/2008/04/28/oil-industry-versus-govt-in-uk/
2:44 AM

William deB. Mills said…
As an American who learned Russian and Chinese way back when and never got around to Arabic (who knew?), I thank you for providing these translations. Americans desperately need exposure to what Arabs are thinking.

I also have a question about your comment that Moqtada al Sadr is a lot less popular than many in the West think. I have no idea what the truth is. My question is: how is one to know? Is there actually any real evidence one way or the other? The answer would make a good blog. Thanks.
10:14 PM