This Shame is Yours. 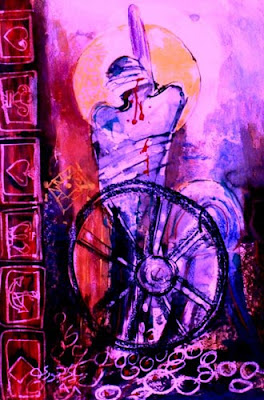 So what's with this endless torture business in Iraq ?

Fawziya al-Jashami said she had seen "horrific traces" of torture during a visit to a prison in the southern Province of Babel of which Hilla is the capital.

"I saw types of torture which are so vicious and horrific that I cannot describe them as a woman.

"It is a kind of sexual torture which one is ashamed to talk about and occurs for the first time in Iraq," Jashami, who heads the Human Rights Committee in the province, said.

Following her fact-finding mission to one of the province’s jails, she said she was appalled by what she saw and heard."

Hey, I thought the "Tyrant" and his regime were the ones who tortured...Did you not tell us about humans minced in meat machines then? Of course, all came out to be lies.

But now, today, this hour, this minute, is where real torture is taking place in "democratic and free Iraq."

I've written about Torture before, and I did mention Iraq's underworld. Out of sight, out of mind...

Well, thank you Fawzia Al-Jashami, for your courage. As an Iraqi woman, today, in "free Iraq" it must have been very difficult for you to even utter the lines you did...

But please Fawzia, don't be shy, timid, nor ashamed. Call things by their names. Leave aside your "pudeur - your "modesty", erase it from your dictionary of morals. In today's Iraq there are no morals left. So why are you so worried about words ?

Say it like it is. Swallow the indignation, the bitter horror and the tears and say it...like it is.

You are in a "democracy" are you not ?

Never before a word has been able to make me hysterically laugh like this one - democracy. It beats all the comics, all the clowns, all the comedy shows, all the jesters...of this world.

Yalla, ya Fawzia, in the name of "democracy" don't be ashamed...

But I know, I know...You are not ashamed, you are fearful. If you call things by their names, you will no longer have a tongue to name anything anymore...I know.
So am not holding it against you.

This shame is the shame of those Iraqis - like the Jarrars and their mother, like the other Iraqi bloggers on CIA payroll, like the Iraqi idiots empty, stupid and hollow...like the Iraqis who refuse to name things by their names...

This shame is that of those Iraqis who still have the gall to talk about sovereignty, who publish articles and get their pay checks at the end of each month -the pay check of "reconciliation"...

It is that of all the Arabs. It is that of the Palestinians idiots whom we gave up our lives for...and now you see them kissing Iranian Mullahs ass. It is the shame of the silent, sleeping, amnesic Arabs, cowardly hiding behind their newspapers...or linking to newspapers...

They are busy kissing Mullah's ass as well...Busy kissing political Shiitism, until their mouths are full...and not the best of mouthwashes will ever rinse it off, will never rinse off the stench...

Kissing those same sectarian Shiites who are sticking broken bottles up the rectums of the inmates you visited. Those shame Shiites who are nothing but vindictive, mean, sadistic, hysterical sectarian whores, begging to be fucked, by a whip or by a super power...worse than your average Zionist Jew...a 100% times worse.

But don't worry about either. Both your average Jew and your average Shiite will stick and stand up for one another...like Siamese twins.

It is the perversity of their minds and that of Truth that fuels them. And they are both perversely sick.

They are both deeply chauvinistic, deeply racist, deeply sectarian, deeply ignorant. And all different shades of darkness love gathering together.

Fawzia, you may be a Shiite yourself. It doesn't matter really. You know what am talking about... You saw it all.

There is no need to be ashamed, don't take the shame onto yourself. Throw it back in their faces...

And I wish you could provide me a sample of a list of torture "practices" and photos, and also a few names...

I want to print it and wipe the faces of these bastards who are either celebrating with posts or are silent...

And maybe, just maybe the faceless ones you visited, will be redeemed.