A One Minute Visit to the Purgatory... 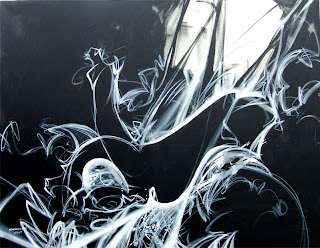 I was just heading to bed, then said to myself, just check your mail. I wish I hadn't.

What I read and what you will also read in the next lines - was familiar to me. But seeing it in black and white, not only brought back all my rage but confirmed to me the hundreds of anonymous Iraqi stories I had heard...

Hundreds of anonymous harrowing stories which since I have started blogging, a good majority of you out there, kept denying, kept denigrating what I relayed to you, kept accusing me and accusing other Iraqis of lies, made it incumbent upon us to bring proof of your savagery, of your brutality when we had not even stopped mourning our dead...

These lines from your brave boys, talking about their deployment in 2005. 2005 was only the beginning.

"Toward the end, we were so mad and tired and frustrated," said Daniel Freeman. "You came too close, we lit you up. You didn't stop, we ran your car over with the Bradley," an armored fighting vehicle...With each roadside bombing, soldiers would fire in all directions "and just light the whole area up," said Anthony Marquez, a friend of Freeman in the 1st Battalion, 9th Infantry Regiment. "If anyone was around, that was their fault. We smoked 'em."
Taxi drivers got shot for no reason, and others were dropped off bridges after interrogations, said Marcus Mifflin...You didn't get blamed unless someone could be absolutely sure you did something wrong, he said...The Army pounds it into your head until it is instinct: Kill everybody, kill everybody," he said. And you do..." (source here)

These brave boys for the most part were discharged with PTSD. Yeah that's right, blame it on PTSD.

Another article, first of its kind tells of how your brave boys tortured members of the previous regime. The case of Hussam Mohammed Amin - Former Iraqi weapon monitor.

If they did what they did to a Weapon monitor who fully collaborated in the course of the interrogations, and when it was clear to all that there were no WMD's in Iraq, can you imagine what they must have done to President Saddam Hussein ?! The President of a sovereign nation!

In Amin's words - "Inside the prison (named the Purgatory) I saw injured colleagues...who were barbarically tortured..."
"Purgatory was official policy, not the result of a few undisciplined soldiers, and in that regard it was most disturbing...said Rod Barton, an Australian bioweapons expert who was one of the senior advisors to the CIA..." (source here)

Also per this article,which you MUST read, it mentions who the U.S employed:

Add, the Dirty gang made of mercenaries and snipers, "independent contractors" -some from South Africa and Latin America. Add the Iranian intelligence units. Add the Peshemergas. Add the Mossad. Add the armed militias and trust me there are more...more of whom whose identities will remain a mystery as well as who their exact employer was/is.

So imagine for a minute, an army like the above, walking into your cities, raping and torturing your men, women and children, "smoking you out" if you move in your own streets, run over your cars if you did not move when asked to, "lit you up if you got too close", shot your taxi drivers for no reason, and threw a few others of you, off the bridge after interrogation, raped your teenage girls and wives and set their families on fire, destroyed your homes, walked into your central banks and just robbed your money, stole your museums and destroyed your historical sites - not that you have any - burned your fields, build walls around your neighborhoods, bombed your churches, pissed and spat on your bibles, left your hospitals and schools in shambles, murdered your scientists, professors, doctors, invited Canada with its armed militias to torture and finish off the rest of you, exiled 5 million of you, turned millions of your wives into widows and children into orphans, and you into beggars, used DU and white phosphorus and more, and more...
And last but not least arrested and brutally tortured members of your government and lynched your president -- All on bogus charges.

In your case it will not be bogus charges because you do possess WMD's and you have links with Al-Qaeda - you invented the damn thing.

Then when you confront us with our acts - we tell you, it's for your own good. We want you to be free from "tyranny". We may admit that we made a few errors and had a "few bad apples" and after all our braves boys are worn out and suffer from PTSD. But we assure you we made all those "sacrifices" for your own good.

Not only that - we also tell you that you are lying, exaggerating, that all of this never happened quite that way, and if we do admit to any of it - and you get angry, we denigrate you, insult you, humiliate you, then we preach into your heads about the virtues of forgiveness, turning the other cheek and patronize you about not being so "hateful".

Just one minute - if you can.