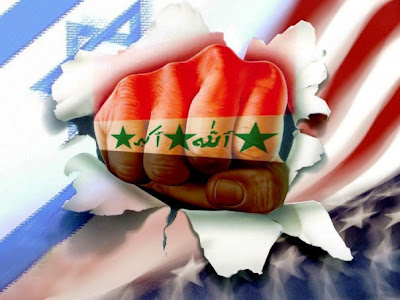 Today is the 4th of July. American day of so called Independence.

For me you're nothing but a bunch of slaves, a 200 years old slaves. A grouping of pathetic, miserable ex-convicts and criminals with no history, tradition or roots...

And you think that a bunch of illiterate, nasal, armed, cowboys who can't even spell or pronounce words correctly - like you - will deter us ? Well think again, assholes.

We are Iraqis. Do you know what Iraqis are -- you arrogant, ignorant, backward people.

Of course you would not know. You know nothing.

We've been around for thousands of years. Well before the Persians, Greeks, Romans... and well before you. We are the first people and will be the last people.

We will reclaim our Independence again. And all of you and those perfidious collaborators of yours - from the persians and their shiites puppets to the zionist kurds will vanish in the dustbins of Ur. As they have done so in the past.

Happy 4th of July suckers and see you around in Ur !

Who are the Iraqis?
By JOE BOB BRIGGS NEW YORK, Nov. 11 (UPI) --
Every decade or so, we should remind ourselves of who the Iraqis are:

1. Twelve-thousand years ago, they invented irrigated farming. They got to be so good at it that, today, they can still produce all the food they need even when "sanctions" are imposed.

3. They figured out how to tell time.

5. In the Code of Hammurabi, they invented the first legal system that protects the weak, the widow and the orphan.

6. Five-thousand years ago, they had philosophers who attempted to list every known thing in the world.

7. They were using Pythagoras' theorem 1,700 years before Pythagoras.

9. Ur, in southeast Iraq, is assumed to be the place we're all descended from.

10. They were the first people to build cities and live in them.

11. For thousands of years, they wrote the greatest poetry, history and "sagas" in the world.

12. Because they were great horse breeders, they invented the cavalry in war.

13. The Iraq Museum in Baghdad contains some of the most outstanding stone, metal and clay sculptures and inscriptions created in the history of the world. Some of them are more than 7,000 years old. If a bomb hits this place, art lovers around the world will go into mourning. (done deal assholes!)

14. The first school for astronomers was established by Iraqis. This is how the "wise men" got to be so wise. They knew how to follow the star.

15. Beginning around 800 A.D., the Iraqis founded universities that imported teachers from throughout the civilized world to teach medicine, mathematics, philosophy, theology, literature and poetry.

16. For the first 1,200 years of its existence, Baghdad was regarded as one of the most refined, civilized and festive cities in the world.

17. Abraham, the father of Israel, was from Iraq.

18. Abraham, the father of Islam, was from Iraq.

19. Abraham, the father and "model" of Christian faith, was from Iraq.


Youtube : Posted by Namirkh - Who are the Iraqis ? Music - Iraqi national anthem.