To The Sons of Bitches... 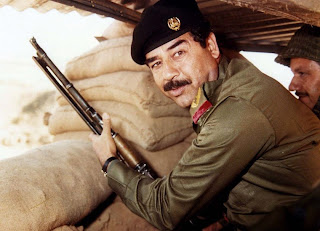 "Baghdad is determined to force the Mongols of our age to commit suicide at its gates."

"I said I'm the president of Iraq... I did not say deposed."

"If you are Iraqi, you know who I am... and you know that I do not tire. I am the president of Iraq.

"Those who fight in God's cause will be victorious."

"We are not intimidated by the size of the armies, or the type of hardware the US has brought."

"We are ready to sacrifice our souls, our children and our families so as not to give up Iraq. We say this so no one will think that America is capable of breaking the will of the Iraqis with its weapons."


The above are a few quotes from the Hero Martyred President of Iraq - Saddam Hussein.
These quotes reflect who he was and what he believed in.

Do you ever hear the puppet Maliki uttering such words ? Or do you hear any of the other Iranian stooges in Iraq capable of such sacrifice for this land ? Of course not. Nor will you ever.

It is in the nature of Americans to settle for mediocrity as partners. That is why they will go after the most vile, most corrupt elements in any society and bring them to the fore - like they did with the Iraqi traitors, fished them out and bailed them out like the crook Chalabi -- from London, the US and Iran and brought them in as "democratically elected" leaders of parties...

The Americans have also a few more on their payrolls, a few Iraqis then re-deployed to the Green Zone for short term contracts - enough to fill their pockets with blood money and return to America to continue the propaganda...

Americans are really politically dirty, good students of their equally dirty English nanny - not so Great Britain. They are what you call in plain english -- Sons of Bitches.

Sons of Bitches such as these bring on other sons of bitches on board. Like they did in Iraq. And more sons of bitches latch on, like the so-called alternative left, including the shady, dubious, conspicuous arab leftists...

You have my full permission and encouragement to refer from today onwards to all the above bunch - the americans and their ideological coalition, the alternative left, the arab left, the iraqi stooges, and the iranian pimps that trained them - as sons of bitches. Be blessed in doing so.

You think this is a vulgar word ? Oh really ?

So you must have elected and are ruled by vulgarity yourselves.

Take your zionist Biden, the one who clamors for the partition of Iraq.
He was visiting Baghdad last week and was in Saddam Hussein's "lavish building" - his palace.

Yes Saddam Hussein has a "lavish building" - a palace. He did not own it, it was the country's property. Just as the White House is not owned by the SOBs that rule it, nor was the Hermitage owned by the Tsars who build it...All government buildings remain the property of the country.

But in the case of Saddam Hussein, much was said about his palaces. Article after article " exposing" the "lavishness".

For your information, Saddam hardly lived in any of them. They were used for official visits most of the time. And, as if he is the only leader who lived in a palace. At least he did not own property outside of Iraq like hundreds of leaders do...But that is besides the point. The point is when it came to Saddam everything was blown out of proportion - from his lifestyle, to his alleged authoritarianism, to the false claims about his endless brutality...

So when a son a bitch like Biden standing in the heart of occupied Baghdad - in the Green Zone, in the occupied palace of President Saddam Hussein, giving out american passports to more sons of bitches who served in this rotten criminal army of yours while uttering the following from his filthy mouth " We did it in Saddam's palace, and I can think of nothing better. That S.O.B. is rolling over in his grave right now."

Actually Biden, if there is anyone rolling over in his LIVING grave right now, it is you - S.O.B.

You bastards have crossed miles with tons of weapons, after 13 years of sanctions, fought long and hard to control even one neighborhood in Baghdad, but you still found yourself barricaded behind high walls in Saddam's palace, surrounded with a thousand body guards, unable to set foot one meter outside the occupied palace...

Not only that, but you used every weapon, at the disposal of your son of a bitch of government to oust and finish off Saddam Hussein physically after having finished his off his sons - from kangaroo courts, to paid iranian agents, to fake judges, to physical liquidation of lawyers, to bribes with money, to false witnesses...everything was used to bring this great leader to the gallows. And he walked to them -- dignified and fearless...setting an example that NO other leader in the world, East or West can or will ever match - ever.

As if the reactionary Americans were not enough, the "enlightened" Western and Arab left of my butt, another set of sons of bitches used and still use the same vile discourse regarding the Hero of this Ummah, President Saddam Hussein - by publishing toilet paper articles, making themselves a name - about the alleged "brutality and sectarianism " of Saddam and the Baath party - when every other son of a bitch with an iota of conscience will tell you that the Baath party was majority Shiite and not Sunni.

But those same sons of bitches while purporting themselves as great humanists, have no fucking qualms in supporting the most deadly sectarian sons of bitches of militias like Jaysh Al Mahdi of the firebrand queer cleric Muqtada Al-Sadr and his drillers - still studying in Iran - in the name of populist anti-imperialism and have no qualms supporting Iran's death squads who have finished off the Arabs in Iraq. And for your info all those sons of bitches are paid by Iran either directly or indirectly...

Now can you get more sons of bitches than that ? Fuck no !

But let me tell you a piece of info that your alternative websites most of which are sons of bitches too - will not tell you.

You probably already read that the puppet Shiites, slaves of Iran, US and the Shiite Hawza banned any visits to Saddam's resting place. Seems that this Great Man still terrifies the puppets even in his death.

But there is one piece of info that no one told you about - so brace yourselves for this - you sons of bitches.

Maliki was visiting Adhamiya the other day - people gathered and shouted - DOWN WITH MALIKI - LONG LIVE SADDAH HUSSEIN. 24 hours later a bomb exploded in Kasra Market in Adhamiya. Everyone knew it was Maliki's punishment.

In fact the people of Adhamiya - who have suffered the most brutal ethnic cleansing by the shiites puppet slaves and in particular the Mahdi Army, those people who are not allowed jobs, whose families were liquidated, whose homes were destroyed, whose fathers, husbands, brothers...were drilled, tortured and still linger in dark jails in the most despicable conditions - the despicable conditions of Freedom and Democracy - braved all the security forces, the police, the army, the security contractors, the snipers, the US helicopters hovering above their heads and came out to tell you and tell the whole world - Down with the sons of bitches, long live the Great Heroes of Iraq.

Yes indeed, these are the true Iraqis.

So repeat after me :