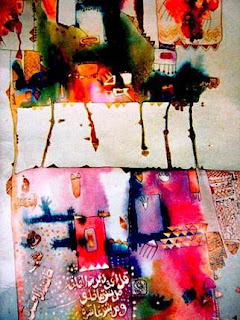 I am feeling excessively depressed tonight. Behind this feeling of "depression" lies the two familiar monsters - sadness and rage.

Was watching T.V. Two programs, to be precise.

One was aired on Al-Arabiya and originally produced by ARTE in 2008, called Oil for Food. It dealt with the sanction years and the billions of dollars of commissions that the civilized West made out of this program, a program institutionalized by the United Nations. Memories of the sanction years came back, filled with despair, horror and pain and I can tell you that they were golden years compared to today's "liberated" Iraq.

This program re-confirmed to me that the West and in particular England and the U.S. are nations of criminals - a people with no conscience, no ethics, no morality.

I felt the all too familiar "depression" creep in again, all too ready to take over, as it had done so many times before...

Against this background and before the second program was aired. I saw a piece of news which was very symbolic. Zalman Khalil Zad, the ex. U.S Ambassador to Iraq, was in Erbil, inaugurated the first " independent Kurdish" oil refinery with Barazani, the zionist kurdish mafioso. This was followed by a Khalil Zad's speech, congratulating the kurdish regional authorities and urging them to open the Iraqi markets for more "investments" of the same kind, in order " to develop the Iraqi infrastructure, so all the Iraqi people can prosper..."

I need to remind the readers, that a whole bunch of despicable leftists, with particular reference to Arab leftists, so called anti-zionists, ardent supporters of the "Palestinian" cause were the first supporters for an "independent" kurdistan.
This I will never ever forget. Blogosphere is full of these political whores. And you will find them nesting on the "anti-zionist" blogs. But this is another chapter altogether...the darkest chapter in the history of the despicable Left and its mass of ignorant following sheep. A revolting, disgusting bunch. Worse than your average zionist, a hundred times worse.

The second program called "Rights" or Huquq, aired on Al-Sharqiya Iraqi sat.T.V, really did me in. The one presenting the program is a bit of an idiot. I really don't know why they brought this woman in. She is of North African origins, I could tell from her accent and she knows fuck all about the subject matter. The subject matter was - Iraqi children and their (violated) Rights.

The program invited three guests, only one of which made any sense. An Iraqi child psychologist based in Amman, Dr. Rakan Ibrahim. A UNICEF representative, an Iraqi female by the name of Bann Al Day'e - your typical UN bureaucrat, there to defend the incompetence of her agency. And a sectarian shiite, occupation, puppet government apologist MP, an Iraqi woman by the name of Samira Mussawi in charge of the "League for the protection of the Iraq Family, Child and Women."(hahahaha)

How do I know she's sectarian and a puppet apologist? Easy, she blamed all the problems of Iraq's childhood on the previous regime and only mentioned in the most brief of ways - that maybe things got a little worse since 2003...

There was also a short filmed reportage - the pictures, oh God the pictures...
Thousands, literally thousands of children begging in the streets aged between 5 and 15...

Hundreds in prisons aged between 10 and 17. Some were showing the signs of torture on their ever so frail bodies, confirming what I have been saying all along, that they were not only tortured but also regularly raped as well, in those prisons.

Thousands aged between the age of 5 and 15 engaged in hard labour.

Thousands with no shelter and no families, drinking water from the river...

One boy about 13, handicapped, his parents were killed by a bomb and his home destroyed to rubbles, was crawling in the garbage dumps - and he said he had 7 sisters to feed...

According to the UNICEF data which is incomplete because the most neglected childhood in the world and by the U.N. -- that same despicable, disgusting U.N who put the sanctions in place, has TOTALLY ignored till this very day - the very serious and grave plight of Iraqi children; their misery, their lack of primary health care, their lack of schooling, their total pauperization, their orphaned status, their severe mental/psychological trauma due to the continuous violence they are being made witness to since 2003 - since their "liberation".

According to this data, HALF of the Iraqi population is below the age of 18.
11% of Iraqi children have dropped out of school and are engaged in HARD CHILD LABOUR to support their mothers and siblings. Or just to fend for themselves, if totally orphaned.

One child not older than 7, said he worked for 10 hours a day, carrying heavy loads for 5'000 dinars -- less than 3 dollars, just enough to bring bread for his family. Heavy loads, too heavy for their small, weak bodies.

The Iraqi government in the 80's had signed the legal protocols for the protection of children as per the Geneva convention.

Today the plight of a massacred childhood, of a massacred generation is falling on deaf ears. The puppet government is not doing anything to remedy the situation. According to this MP Mussawi, she is proposing laws that already exist, but the conflicts of interests between the various ministries, each ruled by a shiite sectarian party - like the ministry of education and health, for example, make it impossible to have any coordinated effort at the governmental level to stop the Iraqi children's catastrophe from unfolding further...

This is truly harrowing.

And as I have repeated it over and over again, the program re-affirmed what I have always written - namely that; Iraqi children specially in the most hard hit areas - Baghdad, and the Anbar - are being trafficked, sold to pedophile sex rings, and also kidnapped for organs stealing. In other words they are kidnapped so their organs are sold - traffic of organs. Oh God, Oh God.

When the UNICEF rep was asked why is her agency not more pro-active. She simply said the "challenges are so overwhelming..."

The idiotic presenter asked the child psychologist what these kids can do for leisure - he nearly slapped her with his reply.

He said : "what toys and what leisure?. These children saw the dead corpses of their parents. These kids are witnessing an ongoing violence that has ripped them apart. Stop the violence first, stop the damage. Feed them. Give them shelter. Build trauma centers, let us try to heal them first, then ask me about leisure and toys..."

By the time the program was over, I felt paralyzed. So numbed out, as if I had been battered by a thousand rods...

I went to the bathroom and opened the water taps - I did not want anyone to hear me. I shouted - Why God, why do you let this happen to these innocent children. They are the first victims of this Occupation. Why ???

Then I remembered a line I had read in one of Farid Esack's books in which he was taken over by doubt and asked that same question - where are you God ? when witnessing the starving, street children of South Africa under apartheid.

And he said to the effect, God said to me - I am that child screaming and crying in your face - but you hear me not.

These kids did not work as child labourers before 2003, they did not beg in streets, they did not drop out of school, they had homes and they had a mother and a father...

You put them in this predicament.

You caused their anguish, you massacred their childhoods, you killed their families, you destroyed their homes, you made them drop out of school, you made them take the streets as beggars, you prevented them from basic health care, you forced them into hard labour, into trafficking, into sex slavery... you traumatized them for life, you destroyed their future, you gave birth to a generation of potential monsters... the new generation of "liberated" Iraq.

There are thousands of Iraqi kids silently screaming and crying in your faces and you hear them not.

And you could not care less.


P.S: You can voice your indignation, if you have any, by sending a mail to rights@alsharqiya.com.