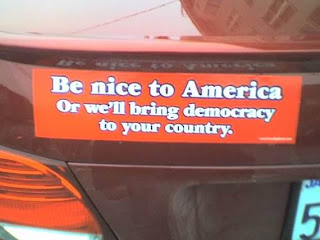 Frankly anyone who believes that -- the about to take place elections is an exercise in Democracy, is a bloody lunatic...

This is no democracy, this is a friggin circus. Notice how polite I've become...am not using the F word no more. If you believe that, you'll believe anything. Including that Iraq is a democracy today. Democracy - my foot!

Yesterday Al-Sharkiya TV, quoting OFFICIAL figures for the month of February alone, stated that over 382 Iraqis were killed, preparing and paving the way for Democracy...

Since am on the subject of news outlets, I am DISGUSTED with Al-Jazeera English total lack of coverage of Iraqi lost lives in the name of Democracy...

Jazeera if you read me, please rename yourself -- Arabic Fox/Press TV news from Qatar. Thank you.

So let's see how this democratic process is unfolding shall we ?

Kurds are at Arabs throats in Nineveh province, where a joint US/Kurdish/Iraqi Forces is patrolling the area...

Clownish candidates are continuing their comic show with distributing i.e buying votes, either with cash, guns, sports shoes and carton of eggs...hahahahaha

A few revelations, not rumors I promise you.

One candidate from INA (the Iranian National Alliance) presented himself as a Doctor...
Upon investigation, this Doctor from Mayssan Province, turned out to have never finished university. He did a teacher's training course for elementary classes. And his exams results were shown on TV, he failed miserably in all subjects except PE. i.e Physical Education.

Another candidate spent 450'000 Dollars printing posters of his ugly face in Beirut, and shipping them to Baghdad in cartons.

The above two are just small examples of the kind of specimens that are ruling Iraq...

One Arabic TV, am not sure if it was Al-Sharqiya or Arabiya ran a very short documentary on the state of palm trees in Iraq. All the palm trees are dying because of lack of water, thanks to fucked up Iran, diverting the water flow by building illegal dams.

Anyways, they interviewed this poor old farmer. He said I lost everything, except two palm trees, that's all I've got left and am tending to them as my own children. And what does the government do ? They come and plaster their shitty faces on my palm tree trunks. He used the word shitty.