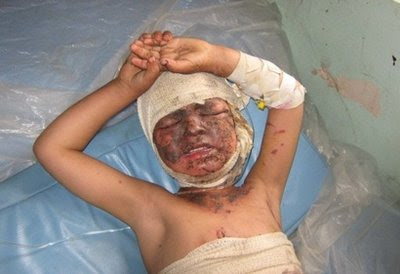 In Persian Mythology, it's about a magical stone that you place in front of yourself, and on which you pour all of your misfortunes, sufferings, pain and miseries...
You confide in it all what you dare not reveal to others...And the stone listens to you, and absorbs like a sponge all your words, all your secrets, until one day...it explodes...and that day, is your day of deliverance.

This is just a translation from the cover of a book am currently reading, a book written by an Afghan writer called Atiq Rahimi who just received the Prix Goncourt, 2008.

A friend of mine who knows of my interest for foreign i.e non western writers, sent me this book. It is called - Syngué Sabour / Stone of Patience. I have been reading it.

I love Rahimi's style. Prior to reading his book, I read one of his interviews and from the word go, I could tell, this man had something unique about him...

I cannot exactly remember what it was, it just left this lasting impression on me and when my friend called a week ago and said - Do you want anything from here? my reply was - "Yes, bring me the Stone of Patience"

Rahimi, however much, far removed from his people, is still an Afghan.
And Afghans are like his Stone of Patience.

But patient, enduring, persevering people are not given the limelight. They don't make it to the front pages...

Just like in Afghanistan. They are daily massacred in the obscurity, in the shadows of the media and press...hoping that no one will notice. All the more reason, to devote a post just for them.

Yesterday, according to the Red Cross, over 100 Afghan civilians, mostly women and children were bombed into oblivion, into nothingness, by the Americans.

"They wept as they spoke of orphaned children and burying loved ones' fragmented remains....My son and my daughter in-law have been killed and left me with a 13-month-old baby...Their remains were buried in a mass grave with others, and I didn't even have a chance to see his face for the last time because his body was blown apart," she sobbed..." (full article here)

Am getting very angry now...I feel my fury rising like a tempest, whirling like a tornado, a volcano's lava about to explode...

Damn you America ! I will not spare any of you. Just as you have spared none of us.


On the front pages of today's "news", the story of some Hollywood crack addict, hooker, by the name of Kristie Alley is making the front pages... Oh no ! She has gained 100 pounds, binging on American shit food.

Or another story, just came in today, making the headlines - World's oldest dog Chanel, the dachshund, dines on pasta and chicken and never learned how to beg..."

And you go around with all impunity murdering innocent people, be it in Afghanistan, Iraq or elsewhere...and you think nothing of it. Just like that.

And your fucked up government, your Obooma administration expressed "regrets" over the deaths in Afghanistan.

You regret do you ?

So what is it you exactly regret ? The rubbles of the demolished homes, the ongoing unspeakable misery you are inflicting, the mass graves of innocent families, the beggars and orphans that fill the streets, or do you regret the "fragmented pieces" of flesh that we go around looking for...

The fragmented bits that we pick up to make whole again, a semblance of a whole...so we can console ourselves with -- Yes this was him/her...

Oh, you fucking bastards with your fucking hypocrisy ! How much I hate you.

How much I hate your tortuous politically correct verbiage, with your hair splitting, twisting and turning like some limp dicks, pretending to be so pure and so puritanical and oh so correct...

How much I hate your phoniness, your fake demeanor, your pretending that you care so much about the "plight" of others...

How much I hate your arrogance, your know it all when you know shit, your airs of superiority and righteousness...

How much I hate your ignorance, your apathy, your intellectual laziness, your idiotic gullibility and your 1000 lame excuses for being the way you are...

You truly make me sick. I find it disgusting that you are considered a part of the human race, a race that I belong to. Someone must have made a mistake in the classifications here...You are something apart. Definitely apart.

I tell you what you are. You are a curse upon the world, you are blasphemy itself, you are the vilest, most criminal nation that has ever surfaced in the history of humankind. You are a fucking disaster upon the world. A Mussiba, a Waba'a in Arabic...a plague, a pandemic, an epidemic, an incurable disease...

And I am now the Syngué Sabour, the Stone of Patience who has heard so many stories, poured upon me like rain, I have absorbed them all and I have exploded in fragments, just like the fragmented pieces of flesh from yesterday, from today, from tomorrow...

Just like the fragmented pieces that remain to be collected, put together...in some semblance of humanity.

I have exploded in a million fragments, in your face.

And more stones of patience have joined me and will be joining me...yesterday, today and tomorrow...

Picture : Courtesy of the Americans in Afghanistan.