From the Land of Darkness. 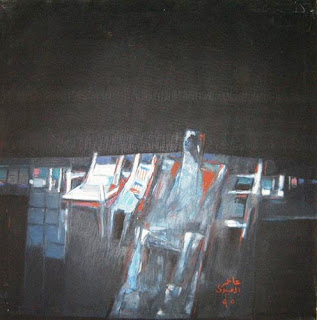 They say the Sun rises in the East, in Al-Sharq in Arabic and sets in the West, in Al-Gharb.

The Sun no longer rises here. This has become the land of Darkness. Of Strangeness, of Foreigners, of Exile, of Crows and Vultures...feeding off carcasses.

An all pervading darkness decorated with your multi-colored banners, colored in white, red and blue, but really all there is, is but a deep black. The black of turbans and chadors and self flagellation in the name of some Mahdi, some Messiah, who if he ever resurfaces, will spit on all of you.

The land of Darkness. A land blackened by Deceit. Obscured with Lies. Occulted with Omissions...

Here She is, a black statue, absorbing all your shadows, like the Kaba'a.

Except this recipient is no stone of patience, or maybe it has become one, more like a statue of salt. They say Salt purifies. Sculpt away in those statues of Salt.

Obscurity has turned into a Wall. One, two, three, four and more Walls...blinding the Light.
Walls on the inside, walls on the outside...Walls.

Walls of Protection. Walls of Secrecy. Walls of Torture. Walls of Death.

Much takes place behind Walls. Walls, and more Walls become witnesses. The lending ear of History. The Annals recording. The Silent tape recorder that does not miss a beat, a murmur, a cry, a scream...

They say God is my witness. I say Walls are mine. My God has become a Wall. To It, I talk and to it, I plead. And the Wall registers it all, engraves it in its bricks, in its cracks, etches it like some calligraphy, with letters from the Koran.

Lovers, thieves and murderers hide behind Walls. So does the victim of Darkness.

You must reach every crack, every orifice, every opening...Old, young, men, women, child, you had to invade and possess them all, just like you invaded and possessed Her.

You owned the cracks in the walls, the orifices, the openings...you owned them, you thought.

When your organs could no longer deliver your deep hatred and wrath, you used alternatives...

Ya Awlad Al Gahba - A pure Iraqi sentence for you. You sons of Whores, ALL of you, nothing was enough for you.

Ya Awlad Al Gahba - nothing filled it enough for you.

From the sacred vagina of a woman to the anus of a child, you took it all.

When your filthy, syphilitic organs could no longer do the job, you used alternatives. Canes, broomsticks, wires, broken bottles and even rodents and worms...

You and your alternatives, secretly masturbated to the image and voted for "Change."

Finally, your impotent men and your neurotic frigid women can have a kick, a full blown kick from having conquered that potent other.

That other -- Arab woman after whom your limp, drunken men, secretly lust like dogs, and the potent Arab man whom your whorish women pay thousands of Euros and Dollars to get fucked during their exotic getaways hoping that some dick will finally accept to marry her. And your pedophiles -- you nation of pedophiles -- come and lurk with your pink and black bellies, waiting for an adolescent, so you can release your frustrations, your frustrations from the stress of the modern civilized world.

You think I don't know what kind of putrid mass your brains are made of ?

And from today onwards, ya Awlad Al Gahba, I will spare none of you, your truths. None whatsoever. I will go for your fucking jugular, whether you are on the right, left, whether you are white, pink or black or some Arab house nigger...I will expose you all. Right down to every single fucking brain neuron you possess.

By Allah, I will not spare you.

Tell me how does it feel to have your mother, sister, wife...raped and torn apart by some Arab army that occupies you with more lies ?

I got news for you ya Awlad Al Sharmoota. You are ALL accomplices in the rape of my beloved. ALL of you.

In particular your liberals, your left wingers of my ass, your progressives, your Obooma bunch, your anti-war pieces of garbage, your stop the war pieces of shits, your putrid anti-Zionists and your Arab house niggers. All of you are accomplices in the rape of Iraq's children, women, men and elderly. All of you.

You know why ? I will tell you why ya Awlad Al Sharmoota and yes am cursing your mothers, the mothers who brought pieces of shits like you to this world...You know why ? Because you used the word BUT. Yes, the war is/was wrong but the dictatorship, the tyrant..the...Yes but, no to Saddam not to the USA. Yes but...

Yes but until you and your oh so fucking brave boys and girls filled our butts with broomsticks, canes, electric wires, rods and the rest from you mansion of Sadism.

Ya Awlad Al Sharmoota, if you ever wonder why I hate all of you so much, remember the crying dark walls of Abu Ghraib. Remember this Land that you turned into Darkness.