Who's Next for Dinner ? 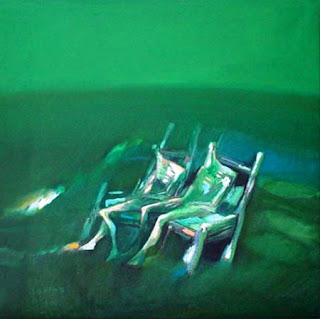 I am really a terrible woman. I am full of good intentions and really want to deliver some good news to you. But somehow, Reality catches up with me.
Mind you, what you are about to read may be considered as excellent news by some of you, possibly a good majority of you. I guess that does not make me so terrible, after all.

So who's next after Pakistan ?

Let's work it together through an elimination process.

Iran ? Nah. Iran is sorely needed in Afghanistan, Iraq and now Pakistan. Who will play the sectarian card so beautifully well if not Iran ? Hell, they do it better than the Zionists, themselves.

Hmmm, who else then ?

Syria ? Nah. Syria was on the big axis of evil. Now it is on the small periphery of evil. A satellite country for Iran, that can come in really handy when needed. You know, like in Lebanon, for instance or maybe elsewhere, depending on where the long Persian -American wind blows...

Lebanon ? Already been dealt with.

Jordan ? Nope. Too inconsequential for it to have any long term effects. And it does have a peace treaty with Israel.

Egypt ? Possibly...But not yet. Egypt is handling the cards relatively well. Not a big winner, not a major loser either. And again, it does have a peace treaty with Israel.

Lybia ? Already dealt with. It's been blessed by Bush.

Oman, UAE, Kuwait, Bahrain ? Nope. Apart from a few internal domestic skirmishes, between hot headed sectarian Shiites like in Bahrain...things are put, or more aptly -- unnecessary to rock the boat, for now.

Qatar ? Definitely not. Qatar is Iran's darling and has the blessings of Israel.

Which country in the Arab world, the news hardly ever cover and in which there is a serious battle going on ? Apart from Iraq, naturally.

Yemen ? Yes, I am afraid it's going to be Yemen.

Yemen hardly ever makes the news, not even the Arabic news.

The National of 30.04.09 bears the following heading "Demands for Division convulse Yemen".

Today 20.5.09, the National reports from Yemen "The government of Ali Abdullah Saleh, the president, has its hands full dealing with the on-and-off insurgency in the north and the secessionist uprising in the south in addition to al Qa’eda and the severe economic hardships plaguing much of the populace...“The situation is so serious and worrying that there is an urgent need that all Yemenis come together to discuss how to get out of this impasse" (article here)

Only yesterday 19.05.09, according to the Yemen Observer, 6 captured Houthi rebels, from the North "admit to using Israeli weapons." and here " Disclosure of use of Israeli weapons by Houthi rebels. Preceded by an "interesting" article dated 16.05.09, again in the local Yemeni press which states "A group of Yemeni Jews will emigrate from Yemen to Israel this week in a secret trip organized by a Jewish agency, sources close to Jews said Saturday..."

Again on 16.05.09. "Iranian Foreign Minister, Manouchehr Mottaki expressed Iran’s support of Yemen’s unity and stability last Monday. “The Islamic Republic of Iran is keen to see the progress, security, and prosperity of Yemen...”

When an Iranian official issues such a statement, you can be 100% sure he means the opposite.

Because...and here is the catch...to be found in this gem of an article dated 9.04.09 entitled "Yemen's political Impasse"

1) "The opposition"(to the government) in Yemen has the full backing of the EU and America"
and,

2) regarding Stability in the North and the Houthi rebels -- this line is sufficient.

A Yemeni MP - "accused the Iranian takfeeri group of propagating extremist ideology and financing terrorist activities in Yemen and of links to both the al-Houthi and al-Qaida elements " and another added " "I think the Houthi rebels are being manipulated by others outside Yemen to destabilize and cause a sort of shake in Yemeni security and stability."

Patience, not finished yet...

On 13.08.2008, Dr.R.Al-Alimi, the Yemeni Deputy Prime Minister for Defence and Security Affairs is quoted in Gulf News saying "The satanic seed of Al Houthis started in 1982 during the Iraqi-Persian war, and over the period of 1983-1984 some cells were formed with Iranian support to carry out terrorist acts..."

And if you read the rest of the article, you will know which country will come after Yemen...I will give you a hint and I quote :

"The cells, Al Alimi said, carried out terror activities when the Saudi ambassador was in Sana'a, and they set fire to women in the street with acid substance, and they threw hand grenades at a cinema in the heart of Sana'a." (article here)

But surely, I will not leave you without the final piece, the mother of all pieces, who will confirm to you who's next for dinner, on the "War on Terror" banquet.

" The State Department warns U.S. citizens of the high security threat level in Yemen due to terrorist activities...The security threat level remains high due to terrorist activities in Yemen...The Department remains concerned about possible attacks by extremist individuals or groups against U.S. citizens, facilities, businesses, and perceived interests...The targeting of tourist sites by al-Qa'ida may represent an escalation in terror tactics in Yemen...The Government of Yemen has been battling al Houthi rebels in and around the northern governorate of Saada intermittently since 2004..."

This kind of information is regularly updated. Last update was on 20.05.09 under the heading "Travel Warning". Signed : U.S. Department of State.