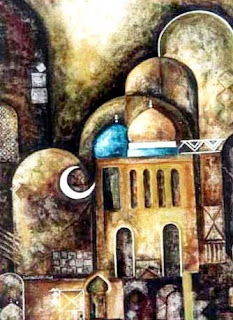 Quietus is an interesting noun. It means " a finishing stroke; anything that effectually ends or settles..." It etymologically originates from the verb "to quit" and is also related to the word "quiet".

A rather appropriate word to describe what is happening in and to Pakistan.

I have made reference to Pakistan in several of my previous posts - the last one being "Framing Pakistan".

Sorry to tell you but tonight, I do not portend good omens for Pakistan. It's alright with me, you may consider me the Mesopotamian version of Cassandra.

Not only has Pakistan been framed, it has also fallen into a deadly trap and it will take lots of good will, political shrewdness and strategic acumen to get out of this hole...and I do not see it happening. And I truly hope to be proven wrong this time.

After many years of living and observing the Iraqi experiment, I can tell you with about 99% accuracy how the plan for Pakistan will be unfolding in the coming months. Because, believe it or not, I see parallels taking place...

A few basics to remember about Pakistan first, and I admit I am not an expert on Pakistani affairs. But from the little I do know, this is my take.

- Pakistan is the only Muslim country to have successfully developed its nuclear program. And it definitely has the potential and the know-how to develop it even further.

- It has a sizeable, solid, educated, entrepreneurial middle class and an important intelligentsia and last but not least -- overall, a non-stagnant economy.

- It finds itself in an important geo-strategic position with coastal lines along the Arabian sea, and borders with Iran, India, Afghanistan and China.

- It is a multi-ethnic/tribal society, majority Sunni but with a roughly 15% of its population being Shiite - the second largest ethnic/sect group after the Sunnis.

- It has been experiencing in the past years, and particularly since 9/11, an increasing, political, anti-American radicalisation of large segments of its population.

- Historically, it is also a fairly recent "nation-state", (an Islamic republic to be more precise) characterized by political instability but which nonetheless managed to impose itself relatively fast and in a weighty fashion in regional and world politics, thus carving for itself an influential position in the international scene.

Just a quick look at the above 6 basic points, can already show you both -- the strength and the vulnerable position of Pakistan.

Geographically, it is surrounded by India, not exactly a love partner. By Iran, who has its own long term ideological agenda for Pakistan in view of its Shiite population - Shiite Revivalism as a political ideology aims to encompass all the Shiite minorities present in this geographical region (including the Arab world).
By occupied Afghanistan, where a deadly American military presence is there to stay and where a war of resistance is being waged...and China who is desperately trying to set foot in that region. Plus the strategic fact that Pakistan is the South Asian gateway to the Arabian Gulf.

All this to tell you that Pakistan is a very important center of "action".

And this is how the "action" starts - based on the Iraqi parallels.

Steps taken and not necessarily in a linear motion as politics are not a one dimensional science. So steps do overlap sometimes.

- Isolate. The U.S used 9/11 as a perfect alibi to start isolating Pakistan even though on the surface it appeared as if it considered Pakistan a collaborating ally in its "war against terror".

However if you recall, the growing criticisms/attacks against P.Musharraf's by Bush and even more so by Obama, until his demise from government. And even then, these have not stopped. Under the guise/pretext that Pakistan is not doing enough to stop "the breeding of terrorists" on its territory, America is hell bent on turning Pakistan into a rogue state on the axis of Evil, Obama style.

- Frame. To support its claims of "breeding terrorists", the U.S and its allies (in this instance India) have to invent them. The still obscure terrorist attack in Mumbai served to frame Pakistan, giving the US and its allies (India and Iran) a leverage card with which it can a) exert more pressure on the Pakistani government to tow the American policy line and, b) provide American propaganda tools with more "beef" for continuing their media spin against Pakistan.

- Weaken. The best way to weaken a country is to force it to engage in a some form of war. It can be a sectarian, civil, tribal, border type of war and preferably a protracted one - a war of attrition.

We are already at this stage insofar as Pakistan is concerned. Four types of wars are being pushed and waged there. A slow insidious sectarian, tribal, border, and external (U.S) ones.

Sectarian - after the still non-elucidated mysterious death of Benazir Bhutto, there has been a substantial increase in sectarian attacks. And these are not about to stop either. This sectarian card will be played in a fuller fashion at a later stage.

Tribal - even though the relation between the Northern Province and the government has always been characterized by some tribal/ethnic/political tensions, these tensions have been fanned high enough to reach a fiery state. Despite a relative truce in the Northern parts, where agreements were signed, something happened.

Most of the articles I have been perusing, state the same thing -- that "something that happened" was "a constant pressure on the Pakistani government to act..." no more details given.

A constant pressure by whom ? By America of course. To act against whom ? Against not only the Talibans as some like to believe but against the tribal leaders of these Northern provinces who are very much supporting the Talibans in their war of Resistance. Already, you have an important fracture taking place in the country's social cohesiveness.

Border - on that front two things are to be noted. First the engagement of the Pakistani army in a guerrilla type of warfare against the Talibans inside its own territories. Something the Pakistani army is not trained to do. Secondly and more importantly, drawing Pakistan into stretching that war beyond its frontiers and into the Afghan side.

This serves a dual purpose : 1) as mentioned, weaken Pakistan to the point of total destabilization and 2) help the Americans and its allies in finishing off the Resistance in Afghanistan by opening up another front for it, to weaken it as well.

External - All throughout, the U.S army has repeatedly violated Pakistani air space and bombed " terrorists targets" in the Northern provinces, killing on more than one occasion, tens of civilians.

The immediate and tangible end result of all of the above is already being felt - a massive exodus of over 500'000 and some say 1 Million of the civilian population and their entrapment. An added pressure on the Pakistani government to deal with this huge number of internally displaced persons.

The driven intention behind the steps of -- isolating, framing, weakening is to destabilize long and hard enough for a country to be paralyzed internally and FALL.

And am afraid this is the American intention (with the tacit approval of India and Iran). The intention is to have the current Pakistan FALL and be replaced with something more in line with American long term policy in the grander region (South Asia and Middle East).

Quietus in Pakistan means dealing a final blow to force it to quit and to be quiet.