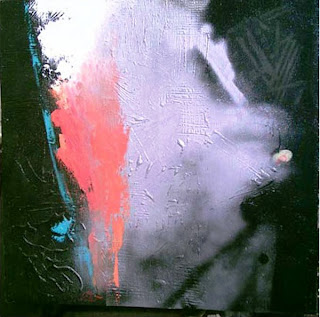 So what's with Pink these days ?

Is it because Spring is here and Summer is approaching -- and you can all let your hair loose, finally ?

"U.S. Defense Secretary Robert Gates on Thursday praised an Army soldier in eastern Afghanistan who drew media attention this month after rushing to defend his post from attack while wearing pink boxer shorts and flip-flops.
In fact, Gates said he wants to meet the soldier and shake his hand the next time he visits Afghanistan. Any soldier who goes into battle against the Taliban in pink boxers and flip-flops has a special kind of courage, Gates said in remarks prepared for a speech in New York. I can only wonder about the impact on the Taliban. Just imagine seeing that: a guy in pink boxers and flip-flops has you in his cross-hairs. What an incredible innovation in psychological warfare, he said."

Oh yes, what incredible innovation and courage...in pink boxers and flip flops. And the effect on the Talibans will be felt long after the 8 or is it 9 years of an ongoing "liberation" of Afghanistan. Forgive me, I've actually lost count.

But let me tell you, Spring is definitely in...

All this pink, how cute !

I personally don't like pink, hardly ever wear it, but I sure can understand if someone else is hooked to it...

I don't condemn Pink nor do I condone it...Just like I don't want anyone condemning me for being Red and Black . If you see what I mean...

Still on the subject of Pink..you know during the Nazi era, gays were made to wear Pink stars...

After the "liberation" of Iraq, gays did not get that same chance. They were murdered well before they reached Pink. The moralistic Shiites militias from Iran, like the Mahdi Army and others...had/have no qualms about sodomizing Iraqi Arab Sunni boys, but gays don't go down too well with them...

Gays in Iraq, even though tolerated in the past, have become the target of a witch hunt. Tens of them have been decapitated, mutilated, burned and massacred in broad day light for their sexual preferences, in "free" post liberated Iraq.

I am not gay myself. As a matter of fact, I am very heterosexual. I am very much into men. And even though am very much aware that Baghdad is not Stockholm or San Francisco still -- the slaying alive of Iraqi gays is unacceptable.

Whether one agrees or disagrees with the principle, and whatever your personal leanings, that is besides the point. It is and remains unacceptable.

What makes it even more unacceptable is while Iraqi gays are being murdered in the most brutal, sadistic fashion in the Red Zone...

The Green Zone American hookers are, in parallel, organizing a gay party in Baghdad, for the white assed gays amongst them. White as in a cultural construct not as in race... (see how politically correct I have become - I am even qualifying my own words now. Are you going to give me brownie points for that ? And do I need to suck up even more...?)

So what was I telling you ? I always go off on a tangent, albeit a necessary one, because your fucking hypocrisy always catches up with me...

Yes, I was telling you about the Pink Gay Pride Party in the Green Zone. So your faggots must be really very proud of a job well done in Eyeraq. Like, does that include the child sodomizers and rapists of Iraqi pubescent boys in Abu Ghraib or does it exclude them from your Pink party ?

Am not prying, I just want to know...so I can invite my friends too...so we can all celebrate with pink balloons...Can I bring along the dead, mutilated, Iraqi gays as well ? Or don't you accept the dead ? I can always shroud them in Pink if you insist...

Too macabre ? Yes, I understand...you'd rather be partying with the living.

I did receive your party invitation, courtesy of the Washington Post.

"Come celebrate the start of Summer with color . . . and in costume! the May 10 invitation says. "Dress in drag or as a gay icon. All are welcome.The invitation was attached to what was called an "All Hands Alerts" e-mail."

And your article went on to say :

"Change has certainly come to Baghdad. And it appears that includes the U.S. Embassy, where they are holding what the invitation says is the first-ever U.S. Embassy Gay Pride Theme Party next Friday at Baghdaddy's, which is the embassy employee association's pub.." 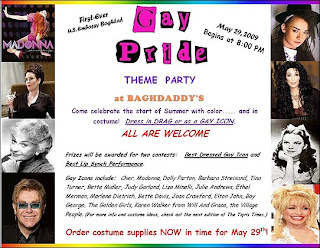 Is that why you also mentioned in your invitation, in the flyer that accompanies it

Why ? You secretly want your daddy to fuck you or what ?

So which one is it ?

And you projected all of that psyche garbage on an innocent people because you wanted to fuck or be fucked by a patriarchal figure ?

And you dare mention the name of the Great Saddam Hussein, the Hero and Martyr of a Sovereign Country that you invaded and occupied, and in which you murdered millions of innocent souls ?

And you dare mention his name, ya faggots, ya khawwals of Amerikkka, when you have raped and sodomized Iraqi girls and boys ?

And you dare mention the name of this great man who walked bare faced to the gallows, when you would be pissing in your pants like crying sissies, ya faggots ?

You feel sorry he is not an icon of your imperialistic buggery now -- Ya Sharameet.

And you want to organize a party ya klab, ya dogs, ya hayawanat, ya animals...

And you dare utter his name....that noble man, who forsook wealth, family, sons, daugthers for his country and you are sorry he did not make it as a fag icon in your putrid, stenchy list of white American and English faggots ?

Okay, I can't take anymore of this.

Ya awlad al sharmoota, ya sons of whores, there used to be one hair left, one thread left between you and I, one bridge, one step...and now you irretrievably wiped it out...

Tell you what, ya kharra, ya shits from America and not so Great Britain, don't you ever dare write to me again.

Whatever thread I held onto, for the sake of Humanity, is now -- for ever gone, in the bye bye of your Pink Dreams...

Because you can keep dreaming on...Iraq will NEVER, EVER succumb to you, sons and daughters of Sodom and Gomorrah.