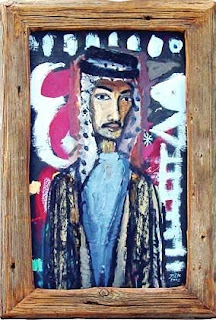 You've probably noticed that I have not said much about Iran's grabbing of the Faqa Iraqi oil well in the Mayssan province, in Southern Iraq.

I did not say much because not only was I expecting it but do you remember the dream/nightmare I shared with you and I recounted it in my post the Long American-Iranian film -- whereby I saw Ahmadinejad roaming the Southern city of Basra, as if he owned the place ?

So it really came as no surprise that the Faqa oil well of Imarra/Maysssan was taken over by the Iranian army.

Now, contrary to what you have been reading, if at all -- there has been NO withdrawal of the Iranian army from Mayssan province, neither partial nor total.

As a matter of fact, the Iranians drew a U shape delineating the new borders and these borders include oil well no.4 of the Mayssan province. And not only did they re-draw the borders that swallowed up an important oil field, but they also raised not one but two Iranian flags there.

Of course, Al Jazeera reported none of it, but Al Arabiya TV as well as Al-Sharqiya Iraqi Sat TV spoke about it at length.

Wait until you hear the "good" parts. And I will give them to you point by point.

- Demonstrations in Al-Imarra by the local inhabitants. Note that Al-Imarra is all Shiite. Demonstrations were staged by the Southern Arab Shiite tribes. The demonstrators were shouting No, No to Iran, No No to the Occupation! before being quickly dispersed by the puppet forces.

- Demonstrations in Kerbala where unions and syndicates of workers, students, jurists, professionals... gathered in front of the Iranian consulate demanding the immediate withdrawal of the Iranian army from the Mayssan province. The Iranian consulate barricaded itself in a radius of 150 meters of concrete to prevent demonstrators from reaching the main gates. Again the Southern Shiite tribes were involved in this demonstration.

Wait it gets better...

- The PEOPLE (as opposed to Sadrist party) of Al Thawra city now called Sadr City also voiced their deep discontentment. Many were interviewed and they had a go at the official spokesperson of Al Maliki; Ali Al-Dabbagh who belittled the take over by the Iranians, and two elderly men said, textually. " In 1979, we offered thousands of martyrs for a few inches of land and today, they(Iran) are not only swallowing land but also oil fields."

- The governor of the Mayssan province (a Shiite) was also not too pleased. Even though he was more diplomatic than the people demonstrating, he urged the puppet government to take "serious measures" to stop the Iranian army from infiltrating further into Southern Iraq. (hahahaha)

- Another head from the Southern tribe is also urging the "international community" (another hahahaha) to stop Iran from building its nuclear reactors along the Southern Iraqi borders stretching from Al-Imarra to Basra, as those "will adversely affect the health of the local population with radiation waste". Radiation waste over and above, the tons of Depleted Uranium that the barbaric, criminal USA used in Southern Iraq and not only there...

Now what do you think was the official reaction of the puppet government ?

Apart from Tarek Al Hashimi (VP) and the heads of the Southern tribes, news have it that explicit orders were given to those presiding the puppet parliament NOT to make any mention of Iran's latest moves in the Mayssan province and its appropriation of the oilfield there. Mind you this is NOT the 1st oil field it has appropriated in Southern Iraq. Definitely not the 1st, since 2003.

So here below is a sample of the official reactions from the Iraqi puppets.

- Ali Al-Dabbagh, spokesman for puppet Al-Maliki said to the effect; Let's not make mountains out of molehills, this is a "secondary issue" which has been resolved.

- Muwaffak Al-Rubai, also known as Karim Shahpour said textually " We need a slow and gentle diplomacy with our neighbors. Let us leave aside "Al-Antariyat". Antariyat referring to Antar Ibn Shaddad, a mythical Arab tribesman known for his bravery. Karim Shahpour was obviously referring to the Arab Southern tribes here.

- The cleric who is a spokesman for Muqtada Al-Sadr, the chief Driller of Baghdad, textually said after long and boring quotes from the Imam Al-Hussein, "Let us be lenient when our brothers transgress a little."

- The Kurdish foreign minister, H.Zebari, basically echoed what the puppet spokesmen said, adding : "these are problems we inherited from the previous regime who could not make peace with anyone."

- As for the Americans, what do you think their reaction was ? Admiral Mullen said that the USA was a little alarmed but that this is a private issue between two neighboring countries and Admiral Shit speaking on behalf of the shit US government urged these two countries to solve it in a peaceful and diplomatic way.

All the above quotes, I heard with my own two ears directly from the sectarian, fascist traitors and their Nazi masters mouths...

Now getting back to some of the demonstrators, one from Sadr city said " The Iraqi army should go and defend our lands "...

And talking about the EX-Iraqi army, Al Sharqiya TV, in a moment of fervor, ran not once but 3 times in the space of 30 mn, OLD pictures of an amazingly well trained, strong, well regimented, defiant army....which looked ready to not only defend but take up all the challenges that no other army can take...

In the same vein, the cowardly Saudi run Al-Arabiya, mentioned that maybe the "old chapters of the Iraq-Iran war are not completely over yet"...

As for "Arabic" Al-Jazeera and its silence on that matter, that in itself merits it to go the "poubelle" (garbage) of the media.

But as the Iraqi proverb goes " What's the point of your protest, after "kharab" (the destruction) of Basra !!"

For those still trying to figure out the map of Iraq, Basra represents the South.

We were several (family and friends) this evening glued to the TV screen, and I was watching this ongoing, never ending rape of my Beloved, and jotting down notes, some spontaneously shouted, as they saw the Iranian flags wavering over Southern Iraq mingled with old pictures of the Iraqi army: