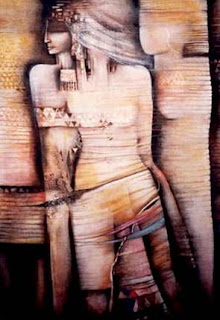 I usually reserve such posts for my other blog, the Uncensored Arabwomanblues (which incidentally I update regularly even though I do not advertise it) as I consider this latter my private "niche". I am not too sure what is so private about it, except my own illusion of privacy.

I really ought to continue my post about the reunion with my relative who arrived from Baghdad. The idea itself depresses me, because what he told me was so depressing and I was left with a very strong feeling that Baghdad and Iraq are a goner...
I wish not to talk about that right now...I am unable to do so, to be perfectly honest with you.

I have already touched upon this subject in my first posts - one of them was called "Decisions in a Closet" and the other "Some Thoughts on the Hijab". In the former I expressed my utter frustrations in having to carefully choose what clothes to wear so as not to give off the wrong signals, and in the latter I argued that more women are having recourse to the head veil as a form of public protection from the males roving eyes i.e from sexual harassment in the streets.

Today I read an article entitled Harassment across the Arab World drives Women Inside.

There is truth in that, judging by the ever increasing number of women who opt to veil themselves (veil as in head scarf) so as to avoid harassment by the men in public places.

My own recollections of sexual harassment in public places are many...the worst was in Cairo. It was beyond annoying, it was horrible. Taking public transport in Cairo was a nightmare. I also remember once an Egyptian passport control officer would not let me through unless I gave him my phone number. The flight was delayed because of this asshole. I gave in and gave him a fake number.

The second worst city for me was Damascus, followed by Beirut. One would think that the Lebanese men seeing such a parade of botoxed, siliconized Haifa Wehbe look alike would be saturated by now, but alas that is not the case. Amman fares a little better than the rest, but it would be a lie if I said there is no sexual harassment there. The worst case I experienced was again in the airport where one security officer decided that I was going to be his prey for that day. He gave me hell even though all my documents were in order. He went so far as to break my vitamin capsules with his dirty fingers, open my contact lenses kit, flip through my private notebook and read the contents and telephone numbers, rip open the folded sanitary pads in my hand bag, in front of everyone...and more which I do not wish to get into right now.

Oddly enough, in conservative Saudi Arabia I experienced no sexual harassment whatsoever in the streets but I did have two unpleasant encounters with the Mutaw'ah, the morality religious police when I was doing my small hajj, the Umra in Mecca and another incident in Medina.

It is obligatory to be veiled in Mecca, but not in Jeddah, I may add, not if you're a foreigner like myself. So here I was circumambulating the Kaba'a, the holiest of places, fully veiled from head to toe, but not my face, when a morality religious police came after me.

Cover up! he ordered.
I am already covered. There is nothing more to cover.
I said cover up, cover up your face.
It is not obligatory to cover the face in Islam. (most women have their faces uncovered during the Umra and the Hajj, except Saudi women)
It is haram !(forbidden) he continued...
Not Haram, you can't be more of a Muslim than the Prophet himself.

That shut him up and he left me in "peace".

In Medina, I had another incident with the morality police. I was visiting the prophet's tomb and the space allotted for the women visitors is much smaller than that of the men and women don't have access except during very limited hours. Hence the place can become dangerously crowded to the point of being killed by a stampede.
The women visiting time was up and the morality police holding sticks in their hand were driving us out from the Prophet's place like a herd of cattle...I lingered a little longer because I didn't have a chance to finish my prayers...So came towards me an eunuch, seriously he was one, I could tell because he had no beard and had a bit of a sissy voice and very smooth skin.

And he got closer with his long stick and frankly I did not feel like getting a beating so I finished off my prayers fast, and left...

In the UAE, I have to say I experienced ZERO sexual harassment. I would go for long walks at night specially in Abu Dhabi and felt totally safe.

I left out Baghdad.

In Baghdad, men would sexually harass too, but much less than what I have experienced elsewhere. I remember driving in our sports shorts with female friends, on our way to the Tennis club, wearing relatively short skirts (compared to today anything is considered short), driving alone at night, walking the streets, and apart from a few comments from male passers by, I felt VERY safe. I never felt the fear of being raped or sexually assaulted.
Even during the sanction years when frustrations were high, Iraqi women, at least in Baghdad, were free to mingle and appropriate their share of the public space.

Some of the sexually harassing comments where along these lines " What a piece of cake " or "They say there is no flour in the market, where did this piece of cake come from ?" (not to be confused with Rumsfeld "cakewalk") and the standard reply by the women including moi was "they say there is no leather in the market, where did this shoe come from ?"

In other words, we fought back. Sometimes with words and sometimes with shoes. Iraqi women are quick to grab their shoes, sandals or slippers and throw them in the face of a predator...It's a tradition in Baghdad.

On the subject of shoe throwing, the first woman who taught me how to aim my shoe correctly, right on target, was my grandmother, bless her soul. She was an expert at it and damn good too. It was her weapon of mass deterrence.

Of course, needless to add, that all those incidents of public harassment took place in spite of my being conservatively dressed. And by conservative I mean no short skirts/dresses, no sleeveless t-shirts, no see through clothing, no legs showing, no cleavage... as a matter of fact, even dressed in a potato bag is no guarantee...

Again, needless to add, if I there was a male present with me, even if he is 20 years my junior, incidents like these would not take place. Forget Baghdad, because in Baghdad, they would shoot the man and take the woman.

And before concluding this post, I must add something else. That even though it is true that sexual harassment in public places does exist in the Arab world, I feel safer walking the streets of Cairo, Damascus, Beirut, Amman at night than I do in any Western country, and definitely safer than America.

Even though it is true that women are sexually harassed, it stays for the most part limited to language as in comments but rarely degenerates to acts of sexual assault like in the West.

I remember being terrified walking through parking lots, subway stations, campuses, parks and even main streets in Paris, London or New York. Terrified of being assaulted, robbed, raped or killed by male gangs or men high on drugs or alcohol.

It's kind of strange that Baghdad since 2003 has become a copy of any big American or European capital where women feel fearful all the time. Or maybe it's not that strange, after all.