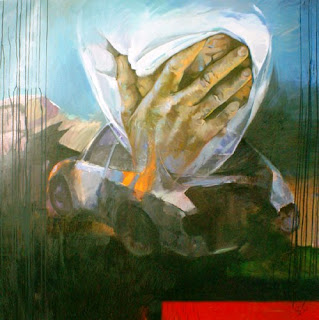 I have a lot of "fresh" news from Iraq, but am very tired tonight and very depressed from what I have heard.

The destruction and resulting political, social, economic. ecological, cultural chaos is so gigantic,so monumental, that I don't even know with which piece of news to start...

All I can tell you for tonight are two things :

1- Obama and Odierno, confirmed that much more violence is expected in Iraq. Odierno even stated that "areas of conflict" like Kirkuk and Nineveh province will require an indefinite American troop presence. The Americans want to see an Independent Kurdistan, I guarantee you that.

2 - the second piece of news I want to share with you, apart from over 7 explosions in Mosul, Kirkuk, Baghdad leaving at least 50 people dead -- is that again, Iranian special forces have been caught in Hilla, Babel and parts of Baghdad, armed with explosives, alongside some alleged Al-Qaeda members. All Baghdadis know for sure and agree that this latest wave of violence is also an attempt by the sectarian parties to mobilize their electorate along sectarian lines for the upcoming election - read U.S-Iran operative with the unceasing strategy of country partition.

I said I was going to share two pieces of news only but I can't stop now...

3- Talabani has summoned in an urgent meeting the Iranian ambassador and expressed his "grave concern" over the fact that Iran has closed off some common lake and river dams in the south and center of Iraq. Talabani assured us that Turkey will help us with some water.

4 - the effect of closing some of the dams, has made it that in some areas like in parts of Diyala along the Euphrates river, the water has flooded many rural houses forcing entire villagers to flee and loose their livelihood in the process.
Another ecological/environmental silent disaster is also taking place, next to desertification/flooding and D.U contamination, that of heavy lead pollution generated by 5 MILLION electrical generators operating on fuel on a daily basis in Baghdad alone - Since there is still no bloody electricity. End result, a dirty thick grey smog covering Baghdad's sky. Let your UN who is dead worried about global warming and the disastrous effects of climate change, come and produce a report on the climatic/environmental lethal hazards of American occupation(s).

7 - In October 2009, a demographic census /survey of the population was to take place under the orders of the ministry of planning. The UN has asked for it to be postponed since the general conditions for such a census cannot take place in today's Iraq.

The Turkmen and Arabs of Kirkuk and Nineveh are objecting to it since they state they are being forcibly moved, exiled from their houses by the Kurds. This latter wants to continue its ethnic cleansing of these areas. The Sunni Arabs are against it too, since the new demographic census wants to mention population division according to SECT and ETHNICITY in specific areas of Iraq. The Kurds and Shiite puppet government want it to go through as soon as possible. How can it be carried out when there are 5 million refugees displaced inside and outside the country ??? Think of the political implications of such a thing being carried out now.

8 - latest semi official figures for corruption and theft by the puppet government.
420 BILLION DOLLARS MISSING from the Iraqi treasury.

9 - well sourced figure for number of detainees - 300'000. Maliki even said a month ago, if we release one, he can be sure we will detain him again.

11 - semi official figure for the number of forged Iraqi nationalities given to non Iraqis (i.e Iranians)- 2 MILLION since 2006. Bear in mind that an Iraqi citizen cannot even get a driving license these days but the puppets do give out Iraqi nationalities to their masters, ever so easily. Do you understand why the Kurds and the puppet Shiites want a demographic census as promptly as possible ?!
Iraq is now considered not only the number 1 country in corruption, but also no.1 in the forgery of documents, from university diplomas to nationalities.

This is making me so bloody tired and so bloody angry at you bastards.

12 - Iraqi journalists, thinkers, writers are complaining that they are being constantly censored and harassed by "democracy", that some of them don't even have a center like in the past where they were allowed to gather for discussion and intellectual exchanges, that the authorities including the Union of Iraqi Journalists refuse to issue a journalist ID if this latter is suspected of not towing the official line...and they are asking you and asking the puppet government - what are you so afraid of ?


13 - last but not least, a wave of ABDUCTION AND KIDNAPPING of young Iraqi women is being carried out in the Baghdad suburb of Arassat Al-Hindiya by a very well organized armed group - no one seems to know who they are. No ransom money is being asked and none of the young women has been seen again.


P.S : I am VERY disappointed in Al-Jazeera Arabic and in the Iraqi presenter Leila Al-Sheikhly whom I thought highly of in the past - for not giving fair and equal air time to anti-occupation, anti-puppet Iraqi intellectuals, in exile but giving ample air time to chauvinistic Kurdish members of parliament and sectarian puppet Shiites from the government.
I suppose Leila Al-Sheikhly is just following her boss's orders from the control room who is adamant about its pro-official Iran line. I find it sad that Al-Jazeera - Qatar, needs to stoop so low. Just thought I'd mention it.