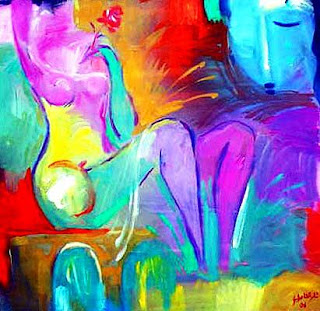 Yuk, ewww, a woman in power. How gross !

Disgusting, disgraceful, she will pollute those pious turbans with her menses.

It's not that really, but can she really be up to it ?

After all they do bleed, get pregnant and are highly emotional. Chaotic creatures, women. Very chaotic.


"Conservative religious leaders in Iran have raised objections to the decision by Mahmoud Ahmadinejad, the Iranian president, to include three women in his new cabinet.

The Tehran Emrouz newspaper on Saturday quoted Mohammad Taghi Rahbar, a member of the parliament's judiciary committee, as saying there were "religious doubts" over how women would cope with the positions.

"Although it is a new idea to choose women as ministers, there are religious doubts over the abilities of women when it comes to management," said Rahbar, who heads the clerics' faction in the 290-member conservative-dominated Iranian parliament.

Rahbar said the clerics' faction, whose view has yet to be officially declared, would seek the opinion of Ayatollah Ali Khamenei, the country's supreme leader, on the issue..." (source)


How sweet of Ahmadinejad to nominate three women in an assembly of a 1000 turbans.

Before the progressives, liberals, leftists (including the Arab jerks and specially the Arab jerks), the anti-zionists... of the new world order, jump up and down like monkeys, and praise the " feminism" of Ahmadinejad, it is well worth mentioning that some "reformist" Ayatush (Ayatollah) said that them women are capable. So Ahamdinejad in an effort to quell the reformist voices, jumped and nominated three.

It is really very nice of Ahmadinejad. His homosexuality has not proved to be a misogynistic one.

Yes I know, that's not terribly PC of me. But a good deal of homosexual men simply hate women or try to emulate them. And I don't really care what you think. This is a fact. Which does not mean they are not allowed to be gay...they can be as gay as they want to be, as long as they don't get near my lover.

I suppose Ahmadinejad feels the same way too. As long as them women don't get near his lover(s). Or as he likes to call them " my peach "

You don't believe me that he calls his lover(s), sorry meant members of his cabinet"my peach" ?

Take for instance one example -- Ahmadinejad praised Kamran Lankarani as one of the most able administrators of his previous cabinet and said : "I have a special personal interest in him, a pious and faithful young man. Once I said he is like a peach [with a 'cute' intonation], one wants to eat him!".

I am told that in Iran you will either call little babies "peach", or your female lovers and only in private, do you tell them that you want to eat them.
Oh but am sure, Ahmadinejad only meant it as a term of "innocent" endearment, really.

I suppose the liberal feminist progressive women's movement of the new world order will hail that highly objectionable unconfirmed possibility of having three women in the all male turbaned assembly as a definite sign of female liberation.

Code Pink and Co. will probably issue another set of pink gadgets, like pink panties and pink nail varnish, as they did during their "immense" "anti-war effort" when the Americans and Iranians (and their deadly sectarian fascist militias) invaded Iraq and stripped IRAQI women (and men of course) and also IRAQI gays of all their liberties and freedoms. And pushed back IRAQI women to the stone age. When during the "dictatorship", they were the most emancipated women in the whole of the Middle East. When during the "terrible reign of terror", they held ministerial positions, when during the "tyrannical rule", they participated fully in public life, when during the "times of the deposed despot", they had laws that effectively safeguarded their rights...

Pink Code and the feminists of the new world order will issue more pinkie gadgets and engage in another tour of pistachio tasting in Qum.

Do not be surprised if you see pink pistachios for sale on their websites - a question of encouraging Ahmadinejad's feminism, or should I say, "love of women".