A Revelation : Find, Know - Yourself. 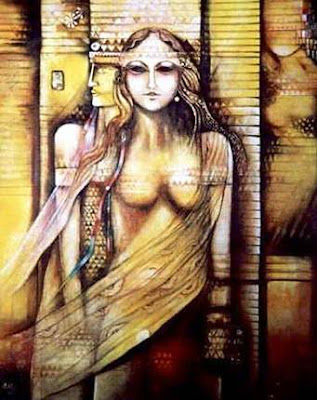 Truths I need to learn usually reveal themselves in my dreams...

I was actually debating whether this post should go on the Uncensored blog or not...

What the hell - after all, they are both my blogs. But it is as if this one is like some public persona and just one click down the page, the private persona is present right behind the public one.

Of course all of this is happening in my head but not quite - since readers have associated this blog with Iraq, maybe forgetting the one who writes about it. The Arab woman. Or maybe I have forgotten her in the process, too.

So the dream I woke up with, revealed to me some truths I have been hiding from myself or more aptly unwilling to face on some deeper level.

I am not quite sure what prompted it. I have been listening to that Greek song that I had just uploaded on my Uncensored blog. I listened to it not less than 25 times, searching desperately for some translation. I just felt it to be a most important song for me, for now...

So I fell asleep listening to it, awaiting meaning...

So this morning I received a part translation from a friend and messed around on web translators to get the remaining bits...

But in my dream - the "meaning" revealed itself and it was most propitious to me.

I dreamt I was in some Arab Company. A cultural entity if you wish. The "bosses" had their own private offices, separated from the rest of the staff. They had total privacy. The staff on the other hand - the staff being me and others, were all gathered in one huge open space office, separated from the "bosses" by a transparent glass door.

On the door, there was a sign that said - Be notified that all your conversations are taped and recorded.

Upon reading this sign, I panicked, thinking to myself - they must have heard everything I said about them - the bosses. I started looking with suspicion to all the others who were cooped up with me in this huge office of "productivity". All along, I felt this was not my real place...

Then one of the bosses - someone in authority - makes an announcement to the effect that half a dozen of American men will be coming "to study" Arab (Muslim) women.

The scenery changes. I am now in some other office that has beds, like some dorm.
There are a group of Arab women, some I knew, some I did not. Some were Muslim, others were Christian.

So, walks in a delegation of tall, blond, blue eyed Americans, that looked like ex-marines, recycling themselves in "Cultural Studies." They sounded friendly and "eager to learn" and they gave us "motivational" speeches and "exercises" to do.

But I sensed that, that was a trap. These guys already have preconceived ideas about us. I said to myself in my dream - these are just a bunch of "orientalists", deep down all they want is some "fascinating" "exotic" fun under the pretext of "cultural studies".

I knew this is not the place for me either. I had to get away. I said to the Western "team leaders" that I need to nip quickly to the local bookstore, to find "references" on Arab women and Islam to help them in their "studies and motivational courses" and shall be back very soon...I never returned.

Then I saw myself in this bookstore. In the dream, it was located in some Western capital. At the entrance, I was asked to disinfect my hands and wear gloves before touching their precious books and publications. I thought to myself, this is crazy, all am looking for is a book. (on Arab women). All am looking for, is something that makes sense. I did not even make it to the first floor of the bookstore where all their "references" were laid. I left the bookstore quickly. On my way out, I saw a metal swivel where the "best sellers" were exhibited.

On the swivel's shelves, I saw many pop books on the Muslim Sufi Mystic Rumi - Rumi made easy for the Westerner. The quick fix Rumi. Cheap t-shirts bearing some of the Rumi quotes...

I thought to myself, they even cheapened, perverted and commercialized this great mystic Master - to make him fit their own comprehension, their own shallow level of understanding...
I will not find my truth here, either. So I left again...

In the final stage of this dream, I found myself on some terrace. It was evening right after the sunset. It was early night. The sky was a shining silver, shining like a polished mirror, the new moon shone like some sun, all bathed in white gold...I sat and contemplated this stupendous evening/night...something I had never seen before in my life.

Then this English woman, who looked very anguished and full of complexes, approached me and said - you women are so oppressed, so subjugated, when will you find your freedom ?

I calmly replied - why are you so scared of us ? She broke down and said she envied something, am not quite sure what it was, then admitted that she was very depressed being a woman. I suggested she took some tranquilizers, and asked her to leave me alone so I can continue contemplating this very special evening...this very special evening where all bathed in a glorious white silvery golden light.

This dream/revelation, gave me a long translation of that Greek song, well before I received the "official" translation. This revelation was most humbling. I woke up with tears in my eyes.

I understood that my liberation, my freedom, is not to be found in an Arab company - where all is very hierarchical, and where am censored and fearful all the time...

That my liberation, my freedom is not to be found in American/Western "cultural studies" on me, when their intentions are neither clean nor pure.

That my liberation, my freedom, was not to be found in some Western book on the subject, nor in some fix-it, pop, spirituality, made easy.

That my liberation, my freedom was not be found in some English insecure Feminist, teaching me freedom.