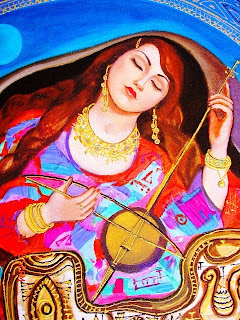 Who do you think is Ali Baba ?
Do you think he is America, Israel or Iran ?
There must be a chief thief no ?
Somehow the 40 is a give away - don't you think ?
One thief for each year of "desert wandering".

I wanted to write about the lousy article of L.Fadel from Mc Clatchy about her Baghdad memoirs. And use this article to show you how propaganda is subtly or not so subtly created even by what is considered an "Indy" media like Mc Clatchy.
I did say Indy media not Hindi media. Hindi media for me is Bollywood. Come to think of it, Western media beats Bollywood and Hollywood, combined.

There are actually quite a few things that irritate me on the net, apart from my lousy virtual keyboard that is driving me absolutely bonkers...

There are as I said the likes of - L.Fadel, add - P.Cockburn (big time), Fisk (even though I feel this latter to be less of a hypocrite - that's normal though, he still lives in the colonial era in his head - or maybe it's not in his head after all...)

There are a more names of course but these are the ones that come to mind now. Since they all like to portray themselves as "experts" when in reality, they only spin more propaganda, suiting their particular political agenda. But as I said, I will deal with one example - that of L.Fadel in some other post.

Other things that irritate me ...hmmm let me see - ah yes bloggers. I don't read other bloggers or try to avoid them altogether in particular Arab bloggers. Might come across as a little elitist, but let me assure this is not the case. It's just that am bombarded with so much crap daily in the likes of Cockburn and Fadel, so to further read Arab bloggers that quote them as authorities -- is simply too much for me to handle...

So I distract myself by watching youtube songs, instead of writing about the lousy Leila Fadel memoirs of Baghdad.

It is all too clear that many made their fortune and fame thanks to the Iraqi tragedy - from the US corporations, to individuals snipers and mercenaries, to other countries, to so called "objective" reporters...

So where was I ? Yes watching youtube as "divertissement". I basically collect songs.

And one song leads to another, a bit like the One Thousand and One Nights saga....

And where do I land ? I land on "Israeli" songs also called "Hebrew" songs.

So of course, being the music aficionado that I am, I listened to quite a few.

I was horrified to hear some ashkenazi sing Umm Kulthum. My hand went to my heart fearing that these "people" will soon claim biblical ownership of this Diva's soul as well as her songs.

I wish my horror was limited to this Israeli rendition of Umm Kulthum...being curious and maybe a bit of a masochist, I went searching for more "Israeli" music...

Since am not into "fiddler on the roof" type of music, I opted for more familiar tunes, all the while being sure that I will find some Iraqi voice there...

Of course my intuition is always right. I found a whole list of songs going under the name of Israeli music - the most famous one being some Iraqi Kurdish Jew, posing with the respective flags of Israel and that of its affiliated mini Zionist entity - now called Kurdistan.

I understood then why the likes of Cockburn, Fadel, Fisk and leftist Arab bloggers irritated me so much. They just all sing to the same tune as this Iraqi Kurdish Jew whose songs are marked under the label of Israeli music.

I listened to a few. They are all stolen from the Iraqi repertoire, some from Turkey and marketed as indigenous Israeli music.

The comments on these songs were most telling too - like :

- or this one " yes﻿ always friend with my Kurdistan friends.GOD BLESS ISRAEL FOREVER.GOD BLESS KURDISTAN "

(someone get the violins going and start the pain industry machinery)

- and this one " ISRAEL WILL BE THERE WHEN KURDISTAN RISES AGAIN TO CRUSH THE ARABS AND TURKS. We promise you this"

- but this one beats them all "I am even more your brother because﻿ in addition to being an Israeli Jew, and that genetics has seen how Kurds and Jews share similar roots...I am also a Persian Jew, and we have the history of the Persians and the Medes, your ancestors."

This also explains many other things - namely the "sensitive hearts" of the "left" and also the "right" for the "poor oppressed" Jews, Kurds and Shiites - preferably only Shiites loyal to Iran - anyone who is NOT an Arab by affiliation/identity.

But this is only one of the Ali Baba stories. Needless to say this Ali Baba and his forty thieves not only steal land, resources, culture...even Arabic Palestinian folk songs, food and dress are now labelled as Israeli. They also steal Iraqi music (next to Iraqi historical artifacts), Turkish music, Greek music, North African music...any thing that they can claim to be originally theirs, under the label of Jewish Israeli. Ya'anee a poor taste, tacky, patchwork made of old rags stolen from other cultures...

Of course that tells you that these people have no culture, they just steal...and fabricate, preferably with blood like vampires.

They have no indigenous culture because the Jewish entity/state as they like to call themselves, is nothing but a fabricated entity from Eastern and Central Europe, to which were added some Middle Easterners, a bit of Falasha to complete the so called Jewishness...basically (or basi - as the American Jew, Jerry Springer, says on his show) - a sour bitter rotten salad imposed on Arab land. In Arabic we call it salata m'afneh.

So watch out for the chief thief and his forty "haramees". One day they will even steal your ears and claim they were chosen to create them in the first place - like God Himself.

Why are you so surprised ? They stole kidneys did they not ?

If you want to watch the wonderful Israeli Jewish Iraqi Kurd with the two flags - click here. This is also where you will read some of the comments from some of the thieves.