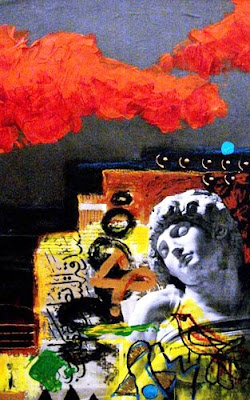 The power of words -- phrases, verdicts and sentences...they take you up and down, they can make you, break you and change your life for ever...

In the beginning was the Word...that first sentence uttered...a sentence made of a human breath -- sound, syllables, vowels...and words were discovered...language was born...

The word has become a sword...

The sentence has become a prison, a guillotine...has become the gallows...le bourreau du 21 eme siecle...

Sentences are emitted, proclaimed and issued...ever so easily, so cheaply, so flippantly, so irresponsibly, so criminally...

In the past, the oral word, the verbal contract had meaning, had weight...today it is not longer the case...In the past, a verbal promise was akin to a written vow...

Today, sentences are meaningless. They are at the disposal of everyone...Any mediocre idiot can pronounce a sentence...any criminal can issue one...sentences have become common...they lost their power. They lost their meaning...

They have become daggers and knives to stab...they have become a charade, a masquerade for a circus...Today, sentences are meaningless...because there is no conscience behind them...

Yet, everyone has a last recourse to them...

Who is the judge and who is the guilty one ? Does it have any meaning today ?

When the judge is the guilty one and the culprit is the innocent...what do sentences mean anymore ?

Lately there has been a lot of serious flirting with sentences...

I am no expert..but I can already tell you that the International Court of Justice is a fucking joke...

I am not a lawyer, and I do not know much about sentencing people...but I can already tell you that kangaroo courts are a travesty of any law ethics...of any jurisprudence...

If the concept of Justice and Law have become so perverted and so corrupt, what is left us for us ordinary humans ?

Courts are our last resort...when we refuse to resort to killing. But when courts kill the innocent ones...what last resort do we have left ?

Law ? What law and what sentences ?

Lawyers should be pulling their hairs out, and submitting their resignations.

Who will sentence the real killers...can any court of law answer me ?

Who will sentence those who "beefed and sexed up" the murder of over a million innocent ones ?

Who will sentence those responsible for an unprecedented genocide in the history of "Democracies" ?

Who will sentence the real criminals ?

Who will sentence America, England, Bush, Blair, Obama, Brown and their whores ?

Who will sentence the thousands of assassins/mercenaries from the Pentagon , the CIA, the Mossad and Blackwater ?

Who will sentence the dirty gangs who murdered thousands of Iraqis for fun ?

Who will sentence Iran for funding and supporting rapists, drillers and murderers in Iraq ?

Who will sentence the rapists, the women killers, the child sodomizers, the gays slayers ?

Who will sentence the torturers, the mass ethnic cleansers ? The destroyers of History, of Civilization and of Conscience ?


I only have sentences...so do you.
And I admit, yours are more powerful than mine...
They can lift me up, take me down, make or break me...

I don't give a fuck about your sentences...

Yes, you read me right...I don't give a fuck about your sentences.

I know it. Just like I know in the beginning there was the Verb and the Noun...and their wedding gave birth to the Sentence...

And today, I the Arab, Iraqi Woman, am sentencing You.


And since I believe poetry is the strongest sentence that survives...I leave you with a few, from an Iraqi poet, Saadi Youssef, addressing those who were innocently sentenced...sentenced to Death.


Naked
We are on our way to Allah
for shrouds we have only our blood;
for camphor, the eyeteeth of wolfish dogs.

The closed cell suddenly swung open
to let in a female soldier
our swollen eyes failed to clearly identify her
perhaps she was from an ambiguous world
she said nothing
she was dragging my brother’s bleeding body, like a worn-out mat.

Are the Americans Christians?
in our cell we have nothing for anointing the prostrate corpse
in our cell there is nothing but our blood clotting in our blood
and the odor coming from the continent of slaughterhouses
the Angels will not enter here. The air is stirring
it’s the wings of hell’s bats
The air is still.

O Lord , we waited for you
our cells were open yesterday
we were lying motionless on its floor
and you, O Lord, did not come.

But we are on our way to you
we’ll find the road to you even if you forsake us
we are your dead sons
we have trumpeted our Day of Resurrection
Tell your Prophets to open for us the doors:
the doors of cells and paradise
Tell them we are coming
we washed ourselves with dry sand
the Angels know us all … one by one...