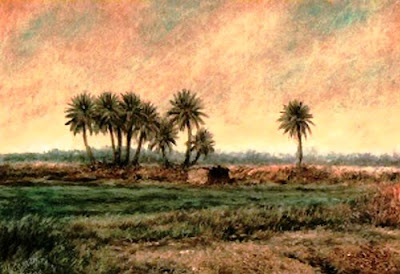 I feel so tired...but I wanted to get this post out, today, in particular today -- the 21st of March.

Why ? Because today, in Iraq and the rest of the Arab world, the 21st of March is Mother's Day. This date also happens to be the first day of Spring, also called Nawroz or the New Year as per the Zoroastrian tradition.

In Iran for instance, they give 15 days of holidays on this occasion...and only one day for the Islamic Eid...makes one wonders how Islamic the Iranian Republic really is. But that is not really what I wanted to write about.

I just find the dates to be too "coincidental". Take for instance the brutal invasion and occupation of our Beloved Motherland. It took place right on the first day of Spring - the New Year as they call it. And today, Obama has offered an olive branch to Iran, its collaborator - its collaborator in the destruction of our Motherland. Coincidences eh ?

Tomorrow in Iraq, some will be celebrating the Nawroz, in particular the sectarian followers of Iran and the Kurds...I even heard two Iraqi guys on TV saying that this date is a day of joy because it is not only the first day of Spring and that of a new Year but it is also the day Iraq was "liberated". Needless to add that these two sons of bitches belonged, respectively, to a shiite party (and all of these latter are foul sectarian parties) and the other a chauvinist zionist Kurd.

Not very nice of me to call someone a son of a bitch on Mother's Day.

Oh but some men are their mothers sons. It does take a hell of a mother to produce such vile specimens. I am not excluding fathers...but trust me when I tell you, mothers in this part of the world play a very influential role in shaping their sons "manhood and virility" and their sense of belonging to clan and sect. I know it to be so. And how ! Vile creatures. These are the mothers from Hell. The evil feminine from the underworld. The pillars of the Inferno.

These two above alleged Iraqi "gentlemen", their mothers sons, will be celebrating tomorrow...of that am sure. I wonder how many other Iraqis will join them in their celebrations.

I wonder if the 5 million orphans will celebrate the Nawroz and Mother's day too ?

And what about the half a million Iraqi kids (and that is an official figure - so ante it up - the Iraqi puppet government is not known for its honesty) - who actually live in the streets of Baghdad, in other words street kids, something unseen before the "liberation" that these two sons of bitches are about to celebrate. Will these orphans and street kids celebrate Mother's day ?

Will the millions of Iraqi women, widows, wives, sisters, mothers, aunts, grandmothers... also celebrate like the two above sons of bitches ? When each of these women has lost someone, either a father, a child, a brother, husband, lover, cousin ...

And the Iraqi mother who lost her sons and daughters, her husband, and members of her family, will these sons of bitches offer her a bouquet of flowers on Mother's day ?

And the Iraqi mother who gives birth in prison, the mother who is innocently detained and systematically raped in the jails of the new democracy, will the janitors give her a box of chocolate on Mother's day ?

Or maybe the American and Iranian mothers will come forth loaded with presents, on an official visit to Baghdad on Mother's day ?

Is that what happens to the Womb that has given birth to you, all of you ? Scum of the earth that you are. Vermin. Worms. Debased, infamous, depraved, lowly pieces of shits that you are.

You want to celebrate the Nawroz, the New Year, the first day of "Liberation" ?

God, I hate your fucking guts. I pray that the Mother, with one strike of her hand turns you into dust and with one breath blows you to the winds, to nothingness because at the end of the day you are nothing. Spineless evil creatures. And it will happen. It will happen. I trust Her.

And that will be my Nawroz, my new Year, my Eid and I will celebrate in the streets and will embrace every single mother I meet, including your own, you sons of bitches. That will be my Mother's day.

Meanwhile, remember your mothers and those who have none.

And this is my small offering to Her.