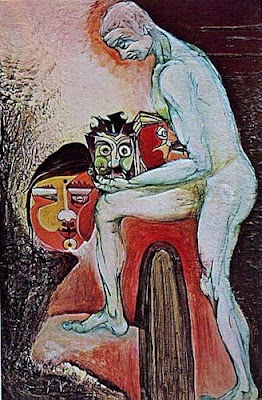 I am still hooked to that video I posted yesterday. And you need to watch it, to make sense of this post.

Apart from the "humor", and I did find it "funny" in a sad sort of way...I re-watched it several times and I believe that this piece of video provides an accurate background picture of what this Occupation amounts to.

I took the time to listen to every single word, the sentences, the reactions of the policemen...etc..

Do not get me wrong, I do not give a fig (please notice my polite tone) about the puppet Iraqi police. Rather I am using this video as some form of oral historiography of the Occupation. I shall explain myself.

This very short video reveals many aspects of the American occupation and the interplay of forces on the ground.

- the first aspect is the one established fact, and alluded to by the American officer --the vile sectarian nature of the police force and by correlation of the puppet government. It is a known fact for example, that many of the Jaysh Al-Mahdi "fighters" joined the police force, as well as the Badr Brigades of Hakeem and the militias of Jabr Solar (ex-minister of interior), of Al-Jaafari and the like...Hence the American asking them where their loyalties lied is spot on.

- the second thing which is most interesting, is that the US occupation forces are very well aware that the police is infiltrated right to the core by the most criminal and sectarian elements of Iraqi society. Yet despite this obvious affiliation, it seems that the Americans want to turn the puppet security forces into some obedient patriotic Iraqi nationals. Which clearly is not the case.
I argue that the Americans want to very much keep the sectarian nature of the security forces and this shall be explained later on...

- the third aspect is the Americans themselves, who have zero trust in the puppet Iraqi security forces and that is why one Iraqi sergeant said in Arabic and that was not translated in the video. He said : " When the worship places were attacked, the American occupation forces prevented us from entering them, and had helicopters flying above our heads and they even arrested us by stating that our ID were forged and that we were Iranians."

It is very likely that the Americans on this account are totally correct. There was and there is a high infiltration of Iranians and of Iraqis of Iranian descent who have swamped the security apparatus (whatever this means in today's Iraq) and indeed many ID's were forged to that effect, names have been changed as well places of birth...and it is also very likely that the Americans stood by and watched carnage after carnage take place and not interfere. A question of let them "kill each other till none is left ..."

- which brings me to the fourth point -- the Americans are very well aware of this double bind. Namely on the one hand the Shiite sectarian nature of the forces they unleashed with their occupation and on the other the paving of the way for Iran's subtle and not so subtle influence and control over Iraqi affairs, politics and society...

- so my fifth point is a question that I and other Iraqis keep asking ourselves.
Could it be that the Americans have been so stupid and reckless in conducting this invasion and occupation or is that a continuous deliberate plan to tear the Iraqi fabric into sects and ethnicities, so that Iraq remains some mirage, a loose country with no identity and no weight in Middle Eastern and World politics ?

All the discourse preceding Iraq's occupation point to the latter i.e a deliberate plan to tear at the fabric of Iraqi society. The discourse that has been promulgated, propagandized and marketed by the Zionist neo-cons of which Perle is one of the chief proponents. Perle in particular is interesting insofar as his ties to Israeli politics, being an ex-advisor to B.Netanyahu clearly denotes the Zionist plan behind this Occupation. It is also very saddening to include in this Zionist plan the Shiites elements of Iraqi society, in particular the then opposition in exile, comprised of Maliki, Jaafari, Chalabi, Hakeem, and the rest, who fueled this discourse with more deceptive lies -- thus leading the way to the partition of Iraq. These are the crux people whose loyalties were and are to Iran.

It then comes as no surprise that the puppet police force reflects those same loyalties. And that, despite the rhetoric to the contrary, like Maliki for instance, who lately likes to portray himself as some non-sectarian puppet leader.

The provincial elections clearly showed how all the Shiite sectarian groups belonging to Maliki, Jaafari, Sadr...infiltrated some obscure lists of names, under the banner of "independent and patriotic" candidates....

And getting back to Perle, he was interviewed on Al-Jazeera English about a year ago, the transcript is still available and I have no time to search for it. In this interview he said that "Iraq's occupation was a success because at least we (the Americans) guaranteed the "liberation" of the Iraqi Shiites and the Kurds..."

On side but very much related note, the same discourse (the arch-zionist Perle's) was and is stil held by a good majority of "liberals, leftists, communists, anti-imperialists..." including "Arab" ones, all headed by their spiritual closet zionist guru, N.Chomsky.

- this naturally takes us to point six, and back to the video where this American tries to portray himself as the Savior of Iraq, stressing on loyalty to the country instead of sect yet at the same time threatens to unleash other forces should the occupied not submit to his orders. Like for instance when he said "If the Sunnis come and murder you, don't count on me to save you...." The Americans will continue playing this card, to justify their presence. The sectarian Shiites and the Kurds and their Iranian masters will continue playing that same card to keep Iran in the Iraqi game...and you will witness this for many years to come...

- apart from this short video based window/insight into how the occupation has used all the sectarian and chauvinistic elements at its disposal by encouraging them and propping them up, to guarantee a continued presence out of "security" necessity, it is also worth mentioning, the clearly condescending, patronizing, racist, sexist, insulting, slanderous tone of the Occupier. The "dialogue" in the video is not some "motivational training" as the title suggests. This is the daily "dialogue", the daily language of the Occupier in Iraq with ALL Iraqis, regardless of who and what their affiliations, are...A dialogue ingrained in a racist colonial violence reflecting itself daily in words and actions.

- last but not least, this video is also quite telling because it clearly shows the utter stupidity of the Occupier. Like when this American said : "I don't see you in my hometown ..." Well of course idiot, you would not see any of them in your hometown, you are colonizing Iraq and not the other way round.

And finally, I have to re-convey my congratulations to the Iraqis who still have hope in their Occupier and in their narrow, chauvinistic, racist sects and ethnicities -- such a people indeed deserve such "dialogues".