A Palm Tree, a Napalm Bomb and a Fallen Leaf... 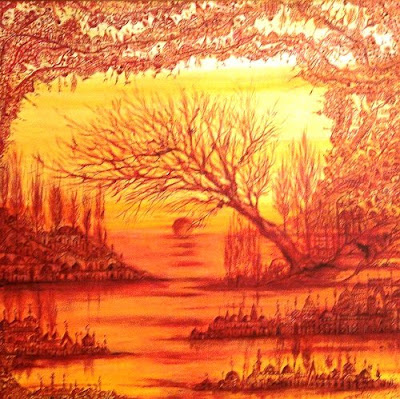 I took this title from a commentator who keeps harassing me...but even a harasser can come up with some good stuff...How about that for impartial, unbiased, objectivity ?

Don't you Westerners pride yourselves on being rational beings and o' so fucking objective? Are you not the ones who posited empirical positivism, cartesian minds over matter, thesis and anti-thesis, dialectics, and hypothetical assumptions tested against hard facts ? All and above a "mundane" reality - "theirs".

Your anthropologists, sociologists, psychologists gather in conferences and publications abound on "them". Is "their" thinking linear ? Lateral ? Cyclical ?
How do "they" view Time ? Is "their" Time extendable, static, malleable...? How do "they" view the Body ? Shunned, exhibited, exposed, hidden ? What conceptions do "they" hold about frontiers between the private and the public ? What are "their" limits? What is "their" edge, "their" breaking point ?

"Culture" - what a lovely word for the liberal masturbators from the politically correct Academia. Twisting, turning and dancing around culture - "their culture".

"We need to be sensitive to their culture." But let us dissect them first...Rats, guinea pigs in our empirical labs of scientific thought.

You have so many ways of approaching the "Other", don't you ? An ecclectic, integrated, multi-disciplinary approach.

This is all so fine -- Am terribly impressed.

Different stratum. Academia, the alternative, and the entrepreneur.

The yuppie kiddo or the CEO about to have a heart attack any moment. Dow Jones, NASDAQ, Hedge funds, options, venture capital, securities, returns and profits...management, excellence, motivational speakers, team spirit, sleek and well kept...sniffing coke or high on speed, in between market fluctuations...

Go for the cut. Quantum spirituality and mortgages. Optimal Living -- your Guru says.
Whoever your Guru is. But you need a Guru by whatever name.

End results across the oceans - Napalm bombs, a dying palm tree and millions of fallen leaves...

Description of Samir Kuntar after 30 years in an Israeli jail.
11:10 AM

Anonymous said…
I was young temporary "Westerner" once, it's not as bad a sickness if one is just a little bit darker - and you get to be a little bit wiser when you see the other side of the napalm, then i seem almost as human as they were before the "Westerners" burned them alive for being darker - but their Gurus were nice and said it was OK, all alright - and to go do it again and again.

Westerners became nice after Korea, then their Gurus made them forget - then they became a bit better after Vietnam but their Gurus cured them again - the westerners have Great white Gurus that make sure Everything Is OK!

Now Westerners no longer need their Gurus, they can go murder in peace with no fear of ever stopping.

When I was young, it seemed that life was so wonderful,
a miracle, oh it was beautiful, magical.

And all the birds in the trees, well they'd be singing so happily,
joyfully, playfully watching me.
Then they send me away to teach me how to be sensible,

oh logical, responsible, practical.
And they showed me a world where I could be so dependable,
clinical, oh, intellectual, cynical.

There are times when all the world's asleep,
the questions run too deep
for such a simple man.
Won't you please, please tell me what we've learned
I know it sounds absurd
but please tell me who I am.

Now watch what you say or they'll be calling you a radical,
liberal, fanatical, criminal.

Won't you sign up your name, we'd like to feel you're
acceptable, oh, respectable, oh, presentable, a vegetable!

At night, when all the world's asleep,
the questions run so deep
for such a simple man.

Layla Anwar said…
anonymouse zionist,
You and the shitheads have more in common than you care to mention...
10:32 PM

Anonymous said…
"Don't you Westerners pride yourselves on being rational beings and o' so fucking objective? Are you not the ones who posited empirical positivism, cartesian minds over matter, thesis and anti-thesis, dialectics, and hypothetical assumptions tested against hard facts ?"

No! It was the Persians who did all that, under Cyrus the Great. Sorry for having to correct you, once again.

Dammit Layla, that sounds just like Maths. Err....wasn't mathematics invented by the Egyptians, during their time of being Empirical?

And as for slavery, who invented that? Oh wait.....wasn't that the Egyptians too?

Ain't life a bitch, and then you find another one blogging away and continually blaming the west for what Arabs taught them.
10:39 AM

This is just a little history of Empire, for you:

Now just take a chill-pill and quieten down your ranting. I can provide you with a "Don't Panic" button, if you need one.

I do have to say that I love the picture that accompanied this past. Of course, it looks kinda "Chinese" but then again, they also had an Empire which lasted some considerable time, and of course, the wall that they built to protect their empire is really magnificent; it's sure bigger than anything the Arab empires built. Plus, their food is better; you can go anywhere in the world and get yourself a Chinese meal. McDonalds is small time.

Wait let me guess - bet you anything you're one of those assholes from IBC.
9:01 PM

provoking invoking said…
I am going to ignore all the stupid comments above and say that this should be published. You are amazing MashaAllah. I have been reading your blog for the last 3 hours and crying my eyes out. Am a very alone/misunderstood muslima in america. the muslims here have lost all reason..
4:03 AM