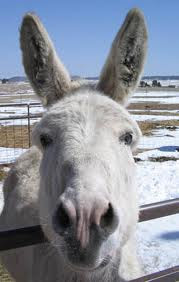 This is serious stuff...not satire at all.

While some have been converting to Paul the Octopus sect, in the wake of his World cup football predictions, am happy to announce that am converting or more aptly joining the Donkey party of Iraq - called in Arabic Jamiat Al Hameer Al Iraqiya. The Iraqi Donkey's Association also known as the Abu Saber Party.

The headquarters of this party which has been approved by the Kurdish Regional Government - probably the only intelligent thing this latter has done - are in Suleimaniya.

But this is no chauvinistic party and is not limited to "Kurdistan". The founder Omar Glul, secretary general of the Party is nicknamed Abu Saber. Abu Saber is also a name given to Donkeys in Iraq. Saber comes from Sabr and Sabr means Patience...Abu Saber means the Father of Patience and who better represents that than a Donkey ?!

The HQ are located in a 5 stars hotel in Suleimaniya. And this party has found much support and mobilization amongst the Iraqi population, in particular its intellectuals who pride themselves to be "original donkeys". And am happy to be one of them.

The Donkey Party branches are called stables and its manifesto is very simple.

The founder affirms that we should all live like donkeys - zmal in Iraqi, because at least Donkeys don't kill one another for power, money or politics...and Donkeys don't lie.

I've said before on this blog that I have never been a member of any party quoting G. Marx - I will never join any club that will accept me as a member...but I am making an exception, and am hoping that the Iraqi Donkey party will honor me and accept me as a loyal lifelong member...

Abu Saber - the Donkey - is running for office on the next round of elections in "Free and Democratic" Iraq - Please show full solidarity and vote for him.


P.S : Thank you Firas for guiding me to the Iraqi Donkey party...hope you will join us too.