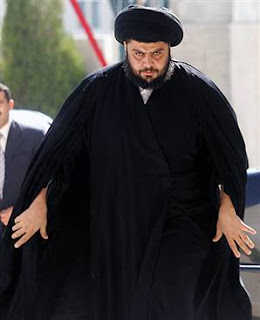 I had to go through the motions of watching that despicable character, the chief driller, head rapist and ethnic cleanser of Baghdad, Muqtada A-Sadr being interviewed on Al-Jazeera by Ghassan Ben Jedu.

I will transcribe and translate the interview and my notes will be marked in RED in part 2.

Before doing so, I have to give you some background information. Some I have already touched upon and some I have kept to myself :

1) First thing -- you need to refer back to my post of 11th February 2010. This post is very important as it contains information that you probably did not register. I will repeat it again here. Al-Sadr and his party and his militia JAM and the ISCI of Hakeem and its militia BADR are ONE AND THE SAME PARTY AT THE TOP LEVEL AND BOTH ARE COMPLETELY CONTROLLED, DIRECTED BY IRAN.

2) Second piece of information that is very important -- the spokesman for Muqtada Al-Sadr was Qais Al-Khazali. Qais Al-Khazali under the direction of Al-Sadr and IRAN Quds force was one of the masterminds of the ethnic cleansing of Baghdad and its provinces. Put an effort here and click on that link called Death Squads in Iraq.. Click on full screen, enlarge and see for yourselves.These are a tiny sample, bits of pieces of evidence of the work of the Shiite militias of Sadr /JAM and Hakeem/ISCI/Badr and the militia of Jalal Al-Sagheer another ultra sectarian shiite criminal. Also do not forget that the latest mass graves unearthed and number 64, and some say 84, in Diyala and Baghdad - in the vicinity of Sadr City to be more precise -- is the work of these criminals.

In 2008, when Al-Sadr decided to so-call freeze its JAM and become a Ghandi, whilst following his so-called theological studies in Qum where HE STILL RESIDES, he and all the anti-war garbage as well as the despicable characters of the Western media like Cockburn, Rosen to name a few, all blamed the sectarian killings on "rogue elements within JAM". These "rogue elements" were none but Qais Al- Khazali and a good deal of the followers of Muqtada Al-Sadr.

Qais Al-Khazali after the so-called split, formed the League of the Righteous, an ultra sectarian Shiite organization.

Al-Khazali alongside the Iranian Quds brigades, kidnapped Moore the english guy and 4 others who discovered that billions of dollars were being transferred from the Iraqi treasury to Iran. The kidnapping was done in broad daylight by 40 men wearing Iraqi police uniforms and in Iraqi police cars.

Al-Khazali was part of JAM and the Americans knew all about his activities. He was not arrested because of his sectarian crimes he got arrested when he kidnapped the brits and killed an american iraqi interpreter in Sadr city.

Al-Khazali was also responsible for the killing of Al-Khoei in Nejaf -- another shiite agent for iran and the brits, who was literally flown  in a british plane to Baghdad in 2003.

Al-Khazali is also known for having kidnapped and killed over 100 people in the Ministry of Education run by the shiites and that was in late 2008. Maliki at one point called him the "great noble resister".

Al-Khazali was then detained by the americans because of the kidnapping and killing of the brits and the american interpreter (and not for his sectarian crimes)  and later on released in exchange for Moore and the 4 english bodies  Moore was released  in Tehran. It was a deal made in Tehran.

Upon his release, Al-Khazali went to Iran. And even though Al-Sadr said he has nothing to do with these rogue elements anymore, I have a recent picture of them together embracing when he arrived to Iran. In other words, Al-Sadr never distanced himself from the League of the Righteous, contrary to his claims. 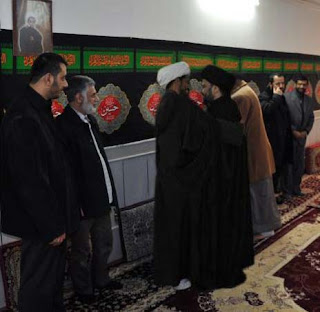 Khazali and Muqtada in Iran
3) About 2 months ago, an article appeared in Kitabat, an Iraqi website, and in that article there were transcripts of a speech by Muqtada Al-Sadr in which he admitted that these "rogue" elements were the ones who ignited the sectarian civil war and had a hand in the bombings of Samarra. The official website of Al-Sadr has removed that article, but I can gladly send it to anyone who wants to read it - it is in Arabic.

The official version of the Samarra bombing  blamed Al-Qaeda and "insurgency." By now I hope you understand that Al-Qaeda in Iraq -- and as I mentioned on numerous occasions in my posts -- is totally infiltrated, by iranian,  american intelligence and others, including the mossad.

Furthermore, the Asaeb Al Haq  - League of the Righteous and Jaysh Al-Mahdi, JAM are both trained by Hezbollah Lebanon.

Will continue this post insha'Allah tomorrow, but do remember the info that I gave you above...and it is all tied in with the interview which will be transcribed in part 2.