On the Other Side of the Fence, re-writing Torture. 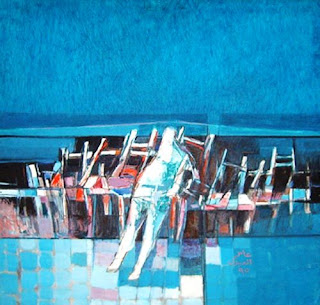 Am I destined to write about this subject or what ? I am "drawn" to it like a magnet. A bit like the tortured subject experiencing his/her "Stockholm syndrome."
Something about Torture is all too familiar to me. Maybe this is something I will delve into, on my other Uncensored blog, sometime...

I am "drawn" to the "subject matter", maybe for a good cause/reason, but not without a price...Every time I write about it, I get awful cramps in my belly, I am filled with nausea, my throat dries up, my muscles contract, and I usually cannot sleep or eat for 24 hours after that...

I also avoid at all costs to re-read any post I've written on Torture...
And am always left with a deep sense of grief, of being robbed of something, and of a silent rage that sometimes frightens me...It frightens me because I am left with the images of horrors and I don't know what to do with them, apart from allowing myself to be taken by a flight into fantasy where I inflict the same on the perpetrator(s).

Yet I see others writing about torture in a very methodical way, in an almost detached "Cartesian", "scientific" way. And I read words like "stress positions", "sleep deprivation", "water boarding", and the rest...but they all come across as "cold" words, devoid of feeling, devoid of...I can't find the exact term...maybe devoid of experience, devoid of empathy...devoid of something essential.
A bit like when a doctor checks your body or like when a mechanic checks your car...that is the closest I can get to describe this "detachment" -- mainly found in Western writers when writing about Abu Ghraib and Guantanamo.

It is this lack of DEEP outrage that bothers me most, really...Maybe the outrage would be stronger felt had the victims been Americans or Europeans...but somehow the fact that they are Arab Muslims seems to "unconsciously" attenuate the indignation, most of the time...

What also bothers me deeply is this repetitive parroting of the words and the names of the culprits. Cheney, Rumsfeld, Bush, Grainer, and others...It is this insidious attempt on the part of the liberal Western writer to really say - they are the bad apples, a few of them...but...

It is the BUT, the hidden BUT, hiding in between the lines, that terribly bothers me.

BUT you were and still are in THEIR country, in my country, a country which you have illegally invaded and occupied and destroyed on bogus charges.

It is as if these writers are implying, the invasion/occupation of Iraq was necessary (the Saddam Bad Wolf Syndrome) however the torture was not, on moral principles, of course.

When I wrote my posts "From the Land of Darkness" and "The Rape of Iraqi Children",
I found out that they were republished elsewhere on the net. I was driven by a strong curiosity to read the comments left on some of the websites. I remember reading one commentator saying " This cannot be us, we have morals." Others said "This is fabricated" and others said "Give us the proof" and others said "I doubt it, this did not happen in Vietnam." And some who felt "uncomfortable with this evil" were quick to add "you should see our prison system here, in this country"...again, another way of diverting and diluting the horror...

And to be "fair and objective", the news circulating about the rape of Iraqi children in Abu Ghraib did raise some amount of outrage, well at least on the surface, the argument being -- after all they are children and they can't help it being born Arabs and Muslims, the rape of Iraqi women and men by US soldiers, on the other hand, was almost viewed as a "normal" banality of "war".

And as usual, it becomes incumbent upon the invaded, occupied, tortured, raped victims to bring forth the proof, the evidence that it actually happened...to bring forth the evidence against all odds, because the victims are not only dealing with a media and governments that fabricate lies and cover up atrocities, the victims are also dealing with "moral" people who cannot possibly accept that their own kind are capable of such atrocities...

And this hidden "but" that I just mentioned above, rears its ugly head, time and time again, in order to actually reinforce the belief that the Americans, their society, their military, their governments (plural) actually have morals. Not only the Americans but Westerners in general.

They have morals, so they believe...except for a few who "suffer from personality disorders" or " who are afflicted with PTSD" or " who are stressed out beyond humane limits with continuous deployment and are homesick "...and it is said with compassion, empathy and understanding...and after all the "just" courts of law of the West have justly dealt with these few bad apples...so they like us to believe...since no one is theoretically above the law, except the government(s) voted in by You people.

I have a serious problem with this assumption, having witnessed the torture of my own people at the hands of Western morality.

and having witnessed and observed the annihilation of Iraq, (and I need to remind everyone again of the bogus charges), the main problem I find with this self proclaimed value system of Western morality, which is supposedly derived from a long historical struggle, a struggle made and armed with political "philosophical" concepts and "ethics", and which culminated in the advent of Western Democracy, is precisely that...and it makes me seriously question the veracity of these political "philosophical" concepts and "ethics"...

I have come to believe that it is precisely this Western world carrying itself as a Universal bearer of historical accomplishments in the sphere of political expression, representation, individual freedom, individual rights, accountability, checks and balances and the rest...that makes me fundamentally doubt it so much...

it is precisely this Western world propping itself up on a pedestal, a pedestal of Democracy, as a necessary and unique Universal Value, Idea...the torch carrier of the virtues of Freedom and Human Rights, the beacon of Enlightenment and Humanistic thought, the benevolent, altruistic teacher of the rest of the world, in particular the Arab and Muslim world, of what political systems to strive for, in order to achieve in turn this Western idyllic example...this Western idyllic example of political morality...that leaves me terribly suspicious of ALL of the West's intentions...


Sitting on the other side of the fence,


the organized, planned, managed, systematic torture that was inflicted on the Iraqi people, (Third world, Arab, Muslim --lesser people) and Abu Ghraib is only ONE EXAMPLE, and while it is seen by the Western detached, impartial, objective, observer as an anomaly on its part, an unfortunate exception, in other simple words
-- a few bad apples only...I, on the other hand, have come to view it as the pillar on which Western "Democracy" has been built.


Sitting on your side of the fence,

some of you will argue - give us a break Layla Anwar, why don't you look at your own side of the fence. The Arab countries are not exactly torture free and worse things happen there...

And my reply is -- worse ? I am not too sure about that. But yes it does happen with one major difference. It is not inflicted upon an entire nation, an entire people, and more importantly it is not carried out in the name of a higher political morality ingrained in a higher, more "elevated" more "advanced" model called "Democracy".

And now, I am off my side of the fence, and I leave you with your OWN stuff, to reflect and ponder upon, as opposed to actually dealing with it...since I know for a fact, that you will not be effecting any spectacular changes, any time in the near foreseeable or far fetched future.

Further Reading -- for a few real live testimonies. Torture is in the Eyes of the Beholder by Malcolm Lagauche.