Fruits from a Jungle... 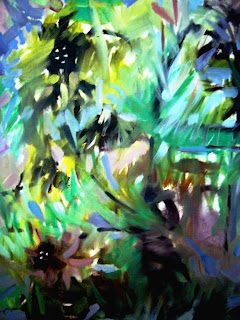 While everyone is very busy with Iran's elections, some pretty sick stuff is going on in Baghdad...

Actually, I don't care much for the Iranian elections personally, but only in so far as how the final outcome will affect Iraq. And the final outcome will affect Iraq since one of its proxies - the sectarian Shiite puppet government was put in place by both Iran and the USA, plus of course all, the all-shiite parties with their all- shiite militias...and the mere utterance of their names still brings on immeasurable fear in people's minds...

Iraq has become a very sick society. Very, very, sick. Corrupt and diseased to the core. And it pains me a great deal to have become a "historical witness", to this rapid degeneration of a whole society...

a) The example set by the Americans Occupation with their applied "culture of no limit."

b) the continuous presence of Iranian backed parties and militias who literally terrorize people with their presence.

c) the destruction/disintegration of the Iraq State with all of its attached civic/civil society/institutions.

End result is the Jungle. You actually have 20 million (or less) Iraqis trying to survive in a Jungle...

When there is no State of Law, Might becomes the only "law".

This law of the jungle is best reflected in :

This lawlessness is most felt by the staggering increase and I mean in the thousands, of rape cases that go unreported...for obvious reasons.

During the "dictatorship", there were clear applicable laws for rape - hanging was one of them and it was non negotiable. A good deterrent in my opinion - because one does not mess with an Iraqi woman's honor and integrity. But this is no longer the case.

Now you can understand why almost all the Baghdadi women outside the Green Zone veil themselves. Not only it is now required by the militias that rule neighborhoods but also these women hope, the veil will afford them some form of protection from the same men that order them to veil...

2) Another aspect where this law of the jungle is seen operating is in the prisons.

Thousands of men (and women) are arrested, detained, tortured, raped and some have been there for years with no trial. Several reports came out (finally) urging the puppet government to seriously look into the grotesque torture and rape that is taking place in Iraqi prisons. I have already covered some of that in my post "Iraq's underworld". For an added confirmation, you can read this article.

3) One more aspect where this jungle's lawlessness is most felt is - when you look at the Iraqi children - not that you terribly care about Iraqi children, but I thought I'd mention it.

The number of orphaned children with no support is in the millions. Street children in Baghdad alone are around half a million. These children are kidnapped, bought and sold, trafficked and used as sex slaves. This is a very serious problem that no one is addressing. This is a catastrophe that everyone is silent about.

There are hardly any properly organized and funded institutions to look after those kids. Hardly any. What will become of them, what is becoming of them ? They are the immediate/direct fruits of the occupation.

4) Yet another aspect from the Jungle of the New Iraq - is abduction and kidnapping by armed groups for ransom. No one really knows who these armed groups are. They may be gangs, criminals, political parties, militias, the police itself, no one really knows...Abduction and kidnapping of ordinary citizens is another very serious problem, another fruit of the Occupation.

5) One more aspect, the increase in drug dealing, selling, buying and using. The number of drug addicts has increased exponentially since the Occupation, and since the Iraqi agricultural fields in particular in the South, have been turned to growing opium instead...

Thanks to Iran and its serious meddling in Iraq, what used to be literally unheard of during the "dictatorship" - drug addicts and drugs trafficking - are now an increasingly common fact.

6) Still more fruits of the Occupation - beggars and prostitutes. I suppose I need not explain why this is so. It is self explanatory no ?

7) And before I forget, one more. 2 million Iraqis still displaced, most living in tents...and form a good deal of the beggars. Another fruit from the Jungle. Not to mention the exiled refugees.

Of course, I have not mentioned all the other types of "juicy" fruits. You may add corruption, non functioning public services, embezzlement of public funds, non existent health services, severe shortages of educated, experienced, intelligentsia, doctors, teachers and technocrats, totally run down educational system, the continuous theft of Iraq's riches and history - the lamentable state of archaeological sites, etc...etc...

And before closing, I want to share with you one story that will illustrate all the above main points. I read it today, a small caption, at the bottom of a newspaper...

An 3 year old Iraqi boy, kidnapped and tortured for 70 days, in the region of Abu Ghraib, has been finally released. His four kidnappers were arrested. The child's father tried reaching an agreement with the kidnappers. He accepted paying a ransom of 50'000 dollars. The leader of the gang had already been condemned in the past for 18 years of prison for another kidnapping."

Obviously, the criminal leader of that gang never served that initial sentence of 18 years.

This is the New Iraq - the innocents one are in prison or murdered and the criminals and the corrupt rule and lead...

This is really the main, lush, fruit bearing tree of the American Occupation - the tree of no-limit "culture" - in the Jungle that has become Iraq - the New Iraq.