A Deadly Thriller in Baghdad... 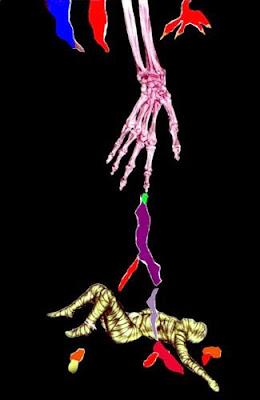 While the whole world mourns the pop icon M.Jackson, whose Thriller was the turning point in his career, there is another series of thrillers taking place in Baghdad and which will mark another turning point in the recent bloody history of this doomed country.

Over the past 4 days alone, over 350 Iraqis were killed. And scores of others injured.

These are the locations all over Baghdad.

Today, yesterday and the day before :

These strings of attacks/blasts/bombs are taking place 4 days before the pulling back, not withdrawal, but pulling back of the American troops to their bases inside Iraq and handing over security matters to the Iraqi "police and army."

However it must be noted that the Americans will NOT be pulling back to their bases in the Nineveh province i.e Mosul. Mosul is a stronghold of the Iraqi Resistance, where a lot of Iraqi ex army officers are. Of course, they call it Al-Qaeda. The Americans will not be pulling back there since Mosul is not completely under Kurdish control yet. And Mosul after Kirkuk is needed to complete the full " Independent" Kurdistan Map.

Oddly enough, the last string of blasts that have rocked Baghdad, NONE in the official government has blamed Al-Qaeda or Saddamists yet.

According to highly confidential reports leaked by Iraqi security experts who wished to remain anonymous, since they are not allowed to divulge any information to the press, and this according to Al-Sharqiya Iraqi TV and to a Reuters report- something most Baghdadis will confirm to you - this string of blasts is due to two factors.

2) Regional Iranian orders to ignite - "explode" a permanent state of sectarian tension that will serve two objectives : a) exert pressure on the Americans and the Iraqi government and political parties, winning greater spheres of control by keeping a state of anarchic chaos for as long as possible until all is accomplished which in my opinion is and here comes the very bad news --- another round of sectarian cleansing and b) detract attention from current Iranian affairs.

This has left an overwhelming of Iraqis wondering if the Iraqi security forces, police and army are actually capable of keeping any form of stability and prevent Baghdad from falling into another round of sectarian violence - which, clearly, is being deliberately provoked.

Some in Baghdad are blaming this last deadly episode of carnage on the IRANIAN Ministries of Interior and Defense.
Others are pointing the finger to the actual Iraqi Security forces, police and army for being behind these killings.

Interestingly enough, a fresh piece of information has just surfaced, pointing to the existence of a highly secretive armed force - an "elite force" trained by the Americans and which is called the "Dirty Brigade."

The "Dirty Brigade", possibly a makeover of the Dirty Gang (made of mercenaries) that used to operate its deadly missions from Baghdad Airport premises.

No one is quite sure who this "dirty brigade" takes orders from and reports to. Is it the Americans only or to leaders of some political parties or to the PM Maliki... This is yet another episode of the Iraqi Thriller which will soon unfold.

Their official logo is fighting terrorists. We already know what this word embraces in current Iraq - just about anyone who stands against the dual occupation -- American/Iran.

On another note, another interesting observation. The US deployed over 650'000 men and women since 2003 - made of soldiers, "logistic coordinators", mercenaries, snipers, dirty gangs, security contractors, project reconstruction staff, embassy staff and the rest...

Today according to official figures there are about 133'000 soldiers left in Iraq. But of course no mention is made of the rest... I believe there are more than 133'000 U.S. military personnel in Iraq today.
But they have assured us they will pull back to base and "will be on call" if needed by the Iraqi puppet government. Meanwhile they will be playing Scrabble and another round of Monopoly...

But what is most interesting is that the official number of Iraqi police and army is 654,362 members, as per the last count.

I must also mention that the only "jobs" available to Iraqis since this damned Occupation is that of joining the police and or army. There are no other jobs available except to work for the Occupation. Belonging to a sectarian party in power will also help you get a job, specially if you are related to some government official. But am leaving this for another chapter...


I already see zombies and ghosts rising from the graves just like in the M. Jackson Thriller video, except this Iraqi thriller is no pop video and no one is there to pay their homages and mourn us.