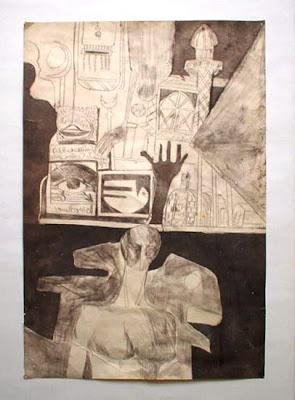 Neda Agha Soltani is the name of the young woman assassinated with a bullet in her heart by the Iranian government Basij Militias. No family funeral was allowed for Neda.
Her family and fiancé were interviewed and the video of her ruthless murder has not ceased circulating across the globe...

All the media outlets have been talking about Neda. That is fine with me. But how come no media outlet has spoken of the thousands of Nedas in Iraq that have been brutally murdered by the Iraqi Shiite Militias trained, armed and funded by Iran ?

Hundreds of Iraqi women have suffered a worst fate than that of Neda, and only in total 3 articles and a couple of videos were circulated in their names. Not even.

Are we the black sheep of the international community ? Or maybe we are just the children of Hagar, who Sarah, Abraham's first wife, banished away from the tribe...and Hagar was left wandering in a merciless desert for Water...searching for anything to quench her thirst...

Excuse me, but why is Neda more important ?

Is it because Iraq is a "fait accompli", a done deal that no one cares to talk about anymore ?

Why is that ? Because America has every interest to keep the status quo intact in Iran despite the rhetoric to the contrary.

How come ? Because as I previously mentioned in one my latest posts, Obama has been having direct talks with Khameini - the "supreme guide".

Why is that so ? Because Iran is still needed in Iraq and sorely needed in Afghanistan.

What is it needed for ?

In Iraq : to finish off any form of resistance to the occupation as it has done in the past, to ensure the continuity of the American occupation, to root out "saddamists", to keep the lid on its militias until further notice, to activate them when needed, to ensure that the puppet government tows the American line and delivers the oil deals, to keep supporting the Kurds in their separatist/secessionist ambitions, to ensure that the partition plan will keep unfolding despite and in spite of the official claims to the contrary...

And lately, Iran has been calling Great Britain "the Great Satan" -- no longer America. All analysis confirm that Obama's criticisms of the Iranian clamp down is mitigated, weighed with caution...and with " balance"

Great Britain will play for a while the role of that "Great Satan", and while all eyes are turned to Iran, the real stuff will be happening in Iraq...

More ethnic/sectarian cleansing. The grounds are being prepared by the so called "Al-Qaeda" which has been allegedly targeting Shiites strongholds . Every other day, a few dozen die in some blast and in "predominantly Shiite" areas...

Everyone knows in Baghdad, forget the Green Zone - am talking of the Red Zone here, and everyone knows in the Red Zone, that Iran and America are behind Al-Qaeda in Iraq. And some would even say, it is Iran funding Al-Qaeda elements in Iraq. A permanent state of insecurity/instability. The carrot and the stick for the Americans - forcing them to reckon with Iran's actual sphere of influence and maneuvering in Iraq.

- Maliki himself is one and has 60 Iranian advisers in his cabinet.

- The ministry of Interior is run by Iranians and sectarian Shiites Iraqis whose main loyalties lie with Qum.

- The Ministries of Health and Education are run by pro Iranians.

- The Ministry of Finance is run by an Iranian - Solagh Jabr. He is the ex minister of Interior and he kept his men in place there. The ministry of Interior is STILL a torture dungeon in its basements.

- The Ministry of oil is run by an Iranian - Al-Sharistani.

- Each province has an Iranian consular section.

- Iranians have bought for a nominal fee, over 75% of all properties in the South, in particular in Nejaf, Kerbala and Basra.

- There are over 30'000 Iranians who visit Iraq daily for "religious rites" and "business."

- There are million of dollars invested in bilateral "construction" and trade agreements between the Iraqi puppet government and Iran.

- The militias that are the armed wing of the official parties like Dawa, Sadr and his Jaysh Al-Mahdi, SCII, Chalabi's men, Maghawer or Interior Ministry militias, are all trained, funded, and armed by Iran.

- The Iranian backed militias did the dirty work for the Americans and the Zionists by ethnically cleansing large parts of Iraq and by torturing Arab Sunnis whom the previous Bush administration called " the Sunni Terror Triangle", segregating neighborhoods and exiling thousands across the Iraqi borders.

- It is the Iranian backed Shiite militias who liquidated hundreds of Palestinians and drove them out of Iraq...

- Hundreds of cases of tortured prisoners, attest that their torturers were Iranians. And I cannot give names here.

- "High Net Worth" Iraqis prisoners in Iraqi prisons are interrogated and supervised by Iranians.

- Iranian prisons are full of Iraqis who have been sent there by the puppet government for interrogation and torture.

- Every other day in the Iraqi news, you hear of special Iranian forces caught with tons of ammunition engaging in "subversive" activities - their way of putting pressure on the puppet government to make sure that it does not deviate from the agreed upon line...

And I have so many more examples...

Hell, the writing was on the wall, when the Iranian Ambassador and the Shiite death squads, militias and parties were present at the lynching of President Saddam Hussein. What more fucking proof do you need ?

And you think America will forsake all of that great Iranian collaboration, for an Iranian Neda ? You must be joking.

So what Neda are you talking about ?

The whole of Iraq has become a Neda with a bullet in her heart.