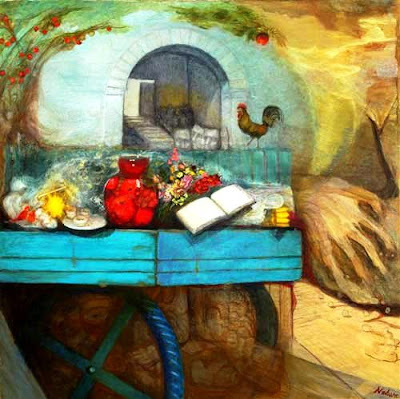 And the continuous crimes go on, unnoticed, unaddressed, while other - cheap, low-life, sold-out bitches are claiming more "divine victories"...

My relative K. has just returned from Mosul. I will not give you details on him, I am adamant about protecting his anonymity. I can tell you though that K. was the most apolitical person you can meet.

K. by virtue of his profession, witnessed many cases of torture victims, he said what he saw in Mosul was nothing compared to what he had seen in the past. In other words for the dumb reader, let me be more explicit - Iraqis are being tortured in Mosul simply because they happen to be Sunnis and Arabs.

He also said the following (in Italics):

- Iranian elements in Mosul are liquidating all the ex-army officers who were involved in the Iran-Iraq war.
Do remember that the Mosul operation is carried out by both the puppet government and the Americans. And follow Logic if you can. So if Iranian elements are liquidating ex-army officers then the Americans have given their green light. And don't come and tell me that Iran and "their poor oh so oppressed, downtrodden Shiites " and the US are not in agreement when it comes to ARAB Iraq. Bunch of bad faithed, fucking idiots that you are. Maybe we will read another exuberant, joyful, song and dance from some Arabs, Palestinians included, claiming another divine intervention in Mosul.

- There are very clear Kurdish plans to annex Mosul and to tie it to the Northern Region of "Kurdistan" also known as little Israel. Ah those "poor, repressed, gassed Kurds" - where are your tears today you deceitful bastards !

So the Mosul cover-up is nothing but an extension, a further application, execution, of the theoretical backbone of Iraq's occupation. In sum - destroy and hand over the Arab Iraqi skeleton to the Zionists whether they are Shiites, Kurds or Jews.

K. also mentioned some things about the Iraqi Resistance but will not share them with you...content yourselves with your murderous, shameless and feeble cover-ups.

Please do e-mail the info.

Layla,
Its been oh so politically correct for many on the Left to separate Jews and Zionists in an effort to gloss over the crimes of a people. Glad to see you call a "spade a spade".
3:43 PM

Anonymous said…
if you really didn't wish to share the info about ir, you would not even have hinted at it.

why make people curious for nothing ?
8:52 PM

Anonymous said…
layla plz cud u tell everyone abt the iraqi resistance....it is the only hope any of us have left
3:37 AM

It's called a reminder or piquing your interest...flip sides of the same coin.
6:25 PM

Anonymous said…
It's funny how you (Layla) always like to claim in your oh so unfactual, non credible blogs that the Sunni Arabs are always the victims of some massive conspiracy either by America, the "evil Zionists", or even Iraqi Shias and Sunnis. That's the way you view everything. Without even blaming your own kind, I never see you write a single post lambasting the Saudis Wahabies for infiltrating Iraq and causing the sectarianism there is today. Even when things on the news are clearly done by the Salafis/Wahabi Arabs like the everyday suicide bombings against the Iraqi police, Army, etc.. Or the deliberate targetting of the Shias, or the targetting of their holy mosques like in 2005. Even these actions to you are just a 'conspiracy' to undermine the Sunnis... It's really pathetic Layla, you're pathetic... But hey, it's understandable you are a damn Arab... What do you know about anything, you can just sit back and blame the Jews when your people fail at life... ahhahah miserable fucks..
10:44 AM