Stuck at a Red Light. 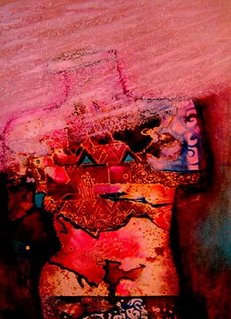 Today I was stuck in a traffic jam that seemed to last an eternity. The lights kept changing colors from Red to Green, Green to Red and I was still stuck, immobilized , unable to move forward .
My radio was blasting a song by Elham Al Madfai* , a song entitled Khuttar (meaning Visitor in Arabic). And whilst I was patiently waiting for the red light to switch off and the green light to switch on, my mind wandered...
I saw the Red Zone and the Green Zone in Baghdad.
The red zone was very red. As red as the sun that sets on the Tigris. Red as blood, red as fire.
The green zone was as green as the palm trees that embrace the river, as green as spring.
The red zone is filled with limbs , scorching heat, immolated bodies with Iraqi kerosene (oil).
The green zone has healthy men and women walking about, playing bowling and billiard.
The red zone is screaming with burns,pain and anguish
The green zone is playing disco music and drinking beer and whiskey.
The red zone is bursting into flames , its markets reduced to ashes, its women pulling out their hair.
The green zone is where secret love affairs flourish, where three meals a day are served and where electricity is available.
The red zone has demolished houses, mosques and targeted churches.
The green zone with its palaces is bathing in blessings handed out by the American parish priest.
The red zone is burning in flames
The green zone is barricaded behind high fences, striking more business deals.
Red Zone, Green Zone, Red light, Green Light, the traffic seems endless.
I have to move now, someone is honking .

* Elham Al Madfai is an Iraqi singer.
** Painting is by the Iraqi Female Artist : Betool Fekeiki.

Shusma said…
I love his music as well, I wish I understood the lyrics to all the songs. Khuttar was the first song of his that I ever heard and I thought it was so haunting and beautiful. It actually made me cry even though I could not understand it. The UK album is amazing.
2:36 AM

Layla Anwar said…
Did you hear his second one , called Baghdad - it is very nice too.
He usually takes traditional Iraqi songs and does a remix . Khuttar on the other hand is his creation.
11:13 PM

Shusma said…
I've never heard that one before. You can email it to me though :) Do you have Fairouz singing Baghdad? It is beautiful.
5:09 AM

Layla Anwar said…
Falastin : I don't know how to email CDs . I am not that much of a PC wiz.
I know the Fayruz one. Yes it is beautiful.
2:42 PM