Excuse me Sir, how would you like your Torture ? 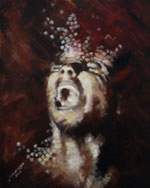 The other day a group of us were gathered discussing the fate of Omar.

As I mentioned in one of my previous posts,Omar,18 yo, was torn out from his bed at dawn and abducted .He has disappeared ever since.
The last thing we heard is that he was "transferred" from the Death squads custody to that of the Americans. Why and how this "transfer"took place , no one knows. We don't even know the reasons behind his kidnapping to start with.I will let you figure it out if you can.
In fact am not sure anyone really knows where Omar is right now .

So seated around a table , sipping tea were : Aunt Kareema (a sunni), Uncle Jassem (a shia), Abu Sami (a christian), a few others and myself.
Of course we were all concerned about Omar and what is possibly happening to him .
Aunt Kareema believes he is better off with the Americans ."At least they will not drill a hole in his head or pluck his eyes out " she says.
Uncle Jassem does not agree. "Do you think having your nails plucked out and your genitals electrocuted is any better ?" He retorts.
"Well, maybe he will come back alive if it is only nails and electrocution" Aunt Kareema replies.
"What if they break his back and he is paralyzed for ever, like they did to others, remember X , he is a vegetable now " adds Abu Sami.
"Yes true , what if he is forever paralyzed and electrocuted , that would be his end" says Uncle Jassem
"True , and if he gets raped on top of it " sighs Aunt Kareema.

And so the "debate" on the different types of torture continued...
No one could reach an agreement , but we all agreed on one thing though -If Omar is in pain and is suffering whilst in custody - we all pray for his prompt death.

This is what we have become reduced to in this surreal episode of our lives .
Comparing different methods of torture and hoping for the most merciful one and if that fails then wishing for a Compassionate death to quickly take over.

We concluded our gathering with a prayer, the only thing we are capable of right now .

Shusma said…
How terribly sad, I don't even know how to react to this.
4:56 AM

While Omar's family prays for him, allow me to pray for each of you. I cannot comprehend the anguish and frustration, but you have placed Omar and his family into my heart.
7:30 AM

Anonymous said…
If only ALL IRAQIS, irrespective of their ethnic background or religion would stand up together, their common enemy 'the occupier' would soon be defeated.

Unfortunately, some Iraqis, without conscience, without honour, have sold their soul to the devil for a handful of dollars, they have fallen into the enemy's trap and are killing their own compatriots.

Exactly what the anglo-american-zionists had planned!

Instigate a civil war in Iraq so that the blame will no longer be put on the invaders but on the stupid Iraqis who can be manipulated into torturing and killing their compatriots.
8:18 AM

Anonymous said…
Devastating Layla,
Somehow you give words to what is utterly unspeakable.
9:40 PM