Caught in a Bubble... 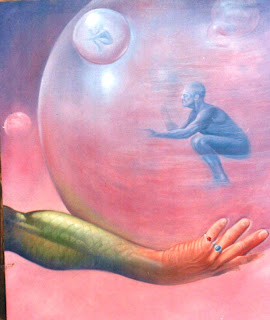 Am I a psychic or am I a psychic ? I must start charging money for political consultations instead of this totally free altruistic sharing...

Did I not say the following :

- In November 2008, regarding the Iraqi provincial elections, I said

"It is very possible that we might witness another inter Shiite front developing between Maliki's DAWA party and the Sadrists of Muqtada - yet again...This possible alliance between the Dawa and the Sadrists remains to be seen and I do not exclude it. Call it the race for power."

Well, well, what do you know - Maliki's party won the majority of the provincial electoral seats, and not less than 4 articles have pointed to the alliance between Sadr and Maliki --again with the drillers calling themselves "The Free Independent Thinkers" party of Iraq. Hahahahahaha

"I have mentioned it and/or alluded to it in most of my posts dealing with Iran, namely that Iran will be used by the US and its allies to stir sectarianism wherever a Shiite minority exists. I mentioned Lebanon, Bahrain, Kuwait, Pakistan, Yemen and Saudi Arabia. I have come to this conclusion after close study of the Iraqi "experiment".
Already a year ago, I have been saying that Pakistan is next on the list. I maintain what I said..."

- In October 2008, I said that Obama will seek an official rapprochement with Iran to win the "war" in Afghanistan.

Since, tens of articles, clearly argue that priority no.1 for the Obama administration is to defeat the Talibans. There has been another surge of about
20'000 American soldiers in Afghanistan, daily attacks on the Afghan civilians, and definitely an official rapprochement between the Obama admin and Iran where each is welcoming the other...hoping this time, to make public an official nuptial agreement instead of the secret muta'a marriage concluded in Baghdad between the Bush admin and Iran.

This, in parallel to the clear thawing of the icy relations between Syria and the USA. And as I have mentioned it before, time and time again, Syria insists on diplomatic ties with the U.S. This latter has already, partly lifted the sanctions by allowing the delivery of half a billion dollars worth of medical drugs to Syria as well as industrial spare parts.

Bear in mind the following whenever you want to get an accurate reading of the regional dynamics in the Middle East : The closer Iran and the US get and they are quite close and have been in Iraq, the closer Syria and other Iranian proxies
will warm up to the U.S, despite their official rhetoric to the contrary...

Pakistan and Afghanistan are definitely high priority on the American agenda and for those two countries, Iran's collaboration is very needed, as it has been in the past as in the case of Afghanistan where Iran provided military logistic support to the Americans and established very cordial ties with the puppet Karzai.

But Iran will not stop there...

Again, as I predicted, Iran has an expansionist policy vis à vis the Arab world, ever since Khomeini came to power in the late 70's. I distinctly recall him saying that the road to a "free" Jerusalem went through Baghdad and Bahrain... Baghdad stopped him. But now Iraq has become an Iranian foothold thanks to America, so who will stop Iran from its racist, chauvinistic, sectarian expansionism ?

Iran has Iraq, Lebanon, Syria, Gaza (yes I know you do not like to hear that last one) and now it is claiming Bahrain...and tomorrow it will claim Saudi Arabia...hahahahaha

Seriously now, Bahrain is very upset. Yesterday it closed its ports to all Iranian ships as a sign of protest response to Ali Akbar Naqet Nouri (a highly placed mullah in the Khameini cabinet) who said that "Bahrain is Iran's 14th province"

Of course, Al Jazeera who is increasingly becoming the mouthpiece for Iran, failed to report this piece of news -- the closing of the Bahraini ports to Iranian ships but Al-Arabiya did. This was later followed by a debate between two spokesmen, one for the Bahraini government and the other for Iran. The latter alleges that "the shah gave Bahrain back following the 1971 treaty with Britain, in exchange for three Gulf Islands..."

The Bahraini official affirmed that Iran never ruled Bahrain and challenged the Iranian guy to provide the name of one single Iranian politician or representative in pre-1971 Bahrain, before the "shah gave Bahrain back to the Brits in exchange for the 3 islands"

He said "We are so used to your political taqiyya, it will not work with us..."

To which the Bahraini guy replied "What has Gaza got to do with it, you keep using the Palestinian cause to justify your expansionist objectives..."

Turns out that the Iranians have forged and published some fake 1971 agreement between Iran and the vile snake, not so great Britain on the net, an agreement that the Bahrainis never heard of before....

Mind you this is not the first time Iran lays its claims to Bahrain. It happened in 2007 and 2002 and during Khomeini's time to the great irritation of the Bahrainis...

Before I forget, one last piece of news, the Iraqis in Nejaf and Kerbala are complaining that the Iranians control everything there. The hotels, the restaurants, the travel agencies...and all the inscription and sign posts are in Farsee. Jawad Bolani (minister of interior) in response to the many complaints received from residents of these two cities, ordered that from now on the signposts, inscriptions and other posters be written in Arabic only...to which one Iraqi resident commented -- that still does not solve the fact that Iran controls Nejaf and Kerbala...and I add -- also controls the South, Basra and Baghdad...

Iraq stopped Persian expansionism in the past but who will stop it now ?

Maliki or the Sadrists or maybe Al-Hakeem clan from Tehran ? No, maybe Hezbollah will stop it, or the Syrian Baath...hahahahahahaha.

Yalla, Good Night, and don't let the Mullahs get you down...My crystal ball says they very well might.