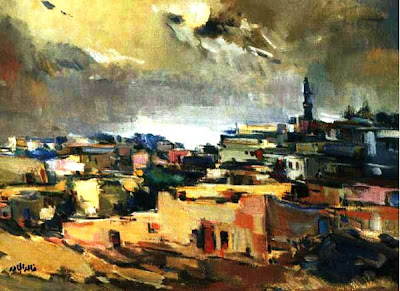 To my knowledge, the only website that regularly covers the crimes in Afghanistan is Uruknet. Other than this site, seems like the Afghan people are left to fend for themselves, cut off from the rest of the world, from Humanity...

I do not know much about the ancient history of Afghanistan...my knowledge of this country is rather limited and I only started paying closer interest after the Soviet invasion...

But when I come to think about it, I was "familiar" with the place through two Afghan items - a sheep skin coat and an embroidered dress. I am not sure that qualifies as familiarity, but in my mind it does.

I cannot remember where I got these from, it was ages ago...Maybe someone gave them to me. I grew very attached to both, for some unknown reason. I loved that long flowing dress and the white sheep skin coat, that smelled of -- sheep.

My friends would remark - "for God's sake, when are you going to get rid of this coat, every time you walk by, we smell a herd of sheep grazing." I did not care, I loved that coat. No matter how many times I took it to the dry cleaners, no matter how many times I left it outside for days on end, hoping the smell would vanish away - it still smelled of sheep. And I loved it because in my mind it was associated with green pastures, tranquility, generosity, simplicity and something grounded in the earth, in the land...

That was my first "exposure" to anything Afghan, ages ago. The second memory is when I actually met two Afghans. I found them to be very respectful, reserved, simple, generous, humble and proud at the same time...

I got to be friends with one of them, and I found in this person, steadfastness, patience, willpower, and that humility I mentioned above. Humility but not resignation. The Afghan people are no sheep.

So I guess I was left with these two impressions that stayed with me somewhere in the back of my mind...hence today, when I watched the news and saw more brutality and misery ripping the Afghan people, I cried my eyes out...

In Ghazni, hundreds of Afghan demonstrated against the US occupation forces there.

In a mosque, filled with about 25 men, praying, the Americans stormed in, and ransacked the holy place, placed their boots on the heads of the men who were prostrating, one of them was over 80 years old, ripped the Holy book, threw it to the floor, fired at the worshippers, insulted them...pictures of the Koran on the floor surrounded with bullets are stuck in my mind till this very minute.

The puppet government sent some anti-riot forces, who then sprayed the demonstrators with some red gas - weird looking stuff, I have never seen before.

I thought to myself, Afghanistan is in shambles, the people have become so impoverished, living in tents, hungry, cold, ill and the civilians are being tortured and massacred daily...and no one talks about it.

Not only are they getting massacred daily in silence, away from the projectors of the media who is keeping the lid tightly shut on events there, but Obama is promising yet another surge in Afghanistan. And Iran is promising to help Karzai.

What is this barbarity ? My mind can no longer comprehend this barbarity of the "civilized world." This has gone beyond politics. And where is it heading ?

And the silence -- the abominable silence regarding the crimes committed daily in Afghanistan is unbearable, truly unbearable...

And let us assume for argument's sake -- that even if the population there were getting fed up with the Taliban's rule, the way NATO and American troops are conducting themselves, makes people long back for the previous reign... As I said the Afghans are no sheep, and they are a very proud people. And I really can't see how America or any of its allies will win this one.

From the memories I have kept, I can already tell you, it will not make a difference to the Afghan people. They have this warrior streak/quality to them...

You have not succeeded in breaking their spirit until this very day and you will not succeed in the future either. The Afghans are unbreakable when it comes to their dignity and honor. Do remember that -- on your 100th surge.