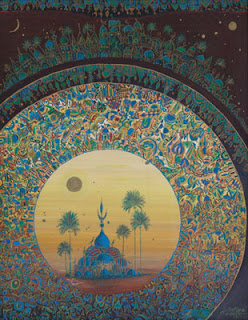 I am going to let you in on a secret that very few know.
In my late teens, I had a terrible crush on a Persian boy called Amir.
Amir in Arabic means a prince. And Amir was a true prince. He had to be, he had a crush on me too. A lovely boy, beautiful eyes, kind, soft spoken, a great sportsman, and at times, quite eccentric.
His passion besides sports was Persian rugs. He loved them so did I.
He taught me for instance that each single rug, handwoven of course, had a story to tell.
The assiduous weavers would draw perfect shapely patterns and then would deliberately botch up a couple of knots. The reason for this was because " Only God is perfect." So even the most stupendous persian carpet could not allow to reflect God's perfection. It had to have a flaw. A deliberate flaw.

One day, Amir invited me to join him on his carpet. He said: " Want to fly on a carpet ?"
And of course I did . Who would not wish to be on a flying carpet?!
He suggested that I pick a carpet that really attracted me. Sit right in the middle of it, in the exact center, close my eyes and let the pattern beneath me fill my mind and just wait... So I did.

Today, am sitting in the middle of my Persian carpet, right in the center.
I close my eyes and I see :
Sherezade recounting more horror stories. Sindibad the sailor approaching with 20'000 captains. Ali Baba and the 40 thieves from Bagh-Dad hiding behind a magical door "Sesame". And high priests from recaptured Babylon shuffling a deck of cards.
I see a perfect "triangle" with it's tip decimated.
I see red blood pouring down the streets of Baghdad. "Halal","Kosher" blood covering play grounds where children used to pretend being princes and princesses.
I see our new "Shahrayar" impatient for a new dawn, giving execution orders to clean his new courtyard and his "triangle", whilst encouraging and urging his Ali Baba and his 4o thieves through the back magical Sesame door.
I see the court jester becoming a vizir. He even sailed to the West and made it through the doors of CNN and cyber world - a new idol perhaps. Only yesterday he was a jester dancing around a corpse but today he has become an "enfant de coeur". His name was Karim Shah-Pour but even that changed.
I also see Ali Baba galloping to the North to avenge for the holding up of a few of his buddies.
I even see a wishy washy troubadour from a foreign land admitting that the king's court had turned black.
I see weird looking boys in strange outfits flying on some wooden board on top of a palace.
And now I am seeing Sharayar, Sindibad Al Bahr, Ali Baba and his petty thieves ruling Bagh-Dad with one single Hand.

Where is Amir now ? Probably smiling from far away. I last heard he is holding a very important position in Washington.

Someone, wake me up ! This is one hell of a bad trip.

Peter of Lone Tree said…
"...even the most stupendous persian carpet could not allow to reflect God's perfection. It had to have a flaw. A deliberate flaw."

Some American Indian tribes, in particular the Navajo, have the same tradition with their blankets.
4:38 PM

Anonymous said…
hi how are you? i can identify with you there. The capitalist system belongs to the XX century, it's time to move on toward Socialism of the XXI Century. People need to understand that the root of all world problems come from capitalism, which was a stage in human development, we need to push progressive movements out there, to stimulate people to be more politically active, the whole world working classes need a 1 united movement against capitalism, the real enemy of mankind !!
5:10 PM

I just wanted to thank you for the kind words on my Blog
7:53 PM

Tate said…
I took the carpet ride. I saw peace, unfortunately it was far, far from here. I saw men and women and children without borders, without barriers. Unique but none above another and none below another.

It was so far from here, but the majic carpet just flashed me to that place and then cruely flashed me back.

The experience showed me that men today are living in the greatest sin because we are trying to be as god. This was the first sin of satan and the original sin of Adam and Eve. Trying to be as god, taking of the forbidden fruit. That fruit might be when we subject others to our wishes. The world is continually evil increasingly going in to this direction and a correction is coming down the hardest on the innocent first.

Doesn't seem fair but maybe there is a fairness outside of this world that will correct it all in time.

Unfortunately, it seems so far from here.
5:44 AM

Anonymous said…
The Devil is like a roving wolf, seeking to devour the world, knowing his time is short. - somewhere in the Bible

Who would the Devil devour if not the innocent who belong to God?
6:14 AM

Tate said…
The Bible also says somewhere that believers in God are like sheep among wolves, and we should be as wise as a snake to avoid peril.

I am sure that the Koran also has a lot of advice about how to manage in this hell on earth we create increasingly for ourselves.
3:57 PM

Anonymous said…
"Be ye Innocent as doves, wise as wolves"
5:33 AM

Anonymous said…
"Be ye Innocent as doves, wise as wolves"
5:33 AM

Let's defeat this evil for the sake of the innocent. Let's not lose faith! Never. Evil can't win, it eats itself. It is cowardly. Good has no shame. We can be a force for good even if we are imperfect. The message needs to get out there. We need some unity. The corporate war-profits energy-profits unity is strong, but it will fade in time. We need some counter to that evil now so that our time will come and be decisive, strong, quick... it will come. Both Muslims and Christians agree that it will come. We need more faith and unity. And if religion bothers someone, then forget about it. Just consider that we are all innocent at birth and some of us retain a part of that innocence. others don't. Clearly, our "born again Christian" Bush is a seed of the Anti-christ... and it shouldn't surprise anyone. Evil always wears a mask. It is ashamed and needs to hide behind a false pretense of good. Bush. Please unite Arabs! Please stop killing each other. The US is instigating this. Stop. Force a US evacuation as a first and only goal. Get the word out. This is totally unacceptable to we who consider innocence to be sacred. Forget religion if it means killing innocent. Use religion if it means eliminating those who kill the innocent. Clear enough, eh?
6:10 AM