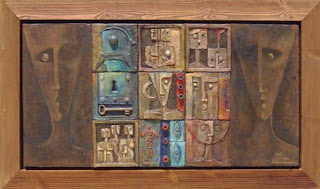 I loved that letter adressed to Saddam Hussein on al basrah.net. The author basically says to the late President of Iraq : "Now you are Free and alive in the hands of God..."

Yes indeed you are now Free. Free from the filth we are witnessing.

At present, a good deal of Iraqis are timidly coming out of their "ideological hideouts" with a little regret here and a bit of remorse there and coyly pussyfooting around the subject.
They say and am quoting from the various sources I read and from people I have been listening to (rather impatiently,I must admit) :

And last but not least, this is from my late Grandma who passed away a few years ago but her quote is still very valid today :
" Even prostitutes had more dignity then.. "

I have many more but I will let the coming days, weeks and months fill in the gaps...

Too little, too late Iraqis .

Yalla enjoy your New Year and your "New Iraq".

Anonymous said…
Layla this is not the way Iraq should of started the new year but if the yanks/jews/safavids have all this planned, the only thing left is for all Arabs to unite (highly unlikely) and kick their asses.
9:46 AM

Anonymous said…
May God bless you Saddam Hussein a thousand times, you had vision.
REST IN PEACE GREAT LEADER.
8:02 PM