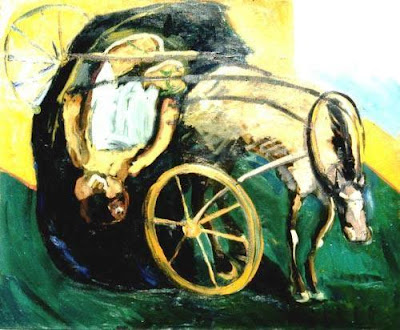 All I yearned for was a short afternoon nap...and I found myself in the Green Zone.

It started off with my escaping in a taxi cab all the way to Baghdad...

I did not tell a soul, I thought to myself, it will be a short trip. Then I find myself in the Green Zone. I pretend am a foreigner, carefully hiding my origins.

I check in a 5 stars hotel, but it is so dark all around me. The lobby is full of prostitutes, crippled men, foreign contractors from all nationalities, and soldiers...A few bearded Iraqis are there, security matters.

The hotel employees are all foreigners. They speak French. They are aggressive and nasty. I tried reminding one of them that this is not France, this is Iraq, he shrugged me off and told me "Rentrez chez vous." I wanted to reply but I am "chez moi" but stopped short...I swallowed the bitter insult.

In the dream I promised myself to stay objective. I shall tour the Green Zone with an open mind, like a tourist...

I came across a bunch of women dressed in military uniforms, some were of Lebanese descent, others Philipinos, and others Latinas. They all said they are willing to die for freedom. I asked "whose freedom?" They said"our freedom."

"But you're in Baghdad!"and their reply"This is the risk we take for Freedom."

I walked away surveying the Green Zone. I saw high walls, high fences, and high gates...There was an Iraqi bearded man standing on some corner.

I asked him, "can the people from the Red Zone visit too?" He said "we only allow widows as cleaners..."

He tried getting intimate, taking advantage of my lone state, and got very aggressive when rebuffed...I ran away...

I walked the streets of the Green Zone. Some were ancient and cobbled, they had beautiful fading away mosaics...hardly noticeable anymore.

The palm trees were all razed to the ground and instead a fake grass was covering the soil, and on top, barbed wires...only one patch was left unsealed...

I looked at the signpost and it said "American patch." And it was surrounded by small artificial ponds, and in the middle of this green patch of fake grass, stood a donkey. They said it was an important tourist attraction. They were even selling postcards with this donkey's image printed on them.

I walked along the barbed wired high wall but was not allowed to enter what looked like a stadium. Lots of Americans were gathered there, with their families, eating and drinking and being their usual shallow, obnoxious, selves.

The show was about to begin. It consisted of a fat, red faced, greasy American, throwing balls into another donkey's mouth and the balls would come out from the donkey's ass and fall into an American acrobat's mouth only to come out from his ass as well.

The American audience was exalted. They laughed and clapped very hard and shouted "awesome."

I felt very nauseous, but was adamant about continuing my tour...

I saw some kitsch, tacky, oriental bazaars lined up, one after the other, catering for the foreigners...and noticed some "peace and love" Western hippie going barefoot on the cobbled stones fooling herself that she has discovered the Exotic Orient.

I wanted to scream to her "you fucking idiotic peace and love Western hippies, can't you see this place has been totally destroyed and is under occupation ?!" But in the dream I had to censor myself, I was in the Green Zone.

I was a foreigner in Baghdad's green zone...I was dying to ask about the Red Zone and what is happening to people there, but I understood it was a taboo subject.

I wanted to escape to the Red Zone, but I knew I will be caught with my fake identity...

I woke up from my short nap, feeling strangulated, choked like a prisoner suffering from an acute case of claustrophobia.

In the dream, I had become a prisoner of the Green Zone along with all the others...

And I understood, there is no escape from Baghdad's Green Zone.