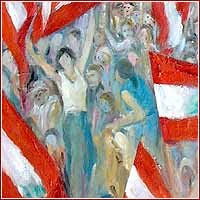 I am not sure the word "Flagomania" exists in the English language.
Oh well, I just invented it .
I could not find any other accurate terminology that would best describe the new Lebanese fervor for Flags.
On the right and on the left and along the whole of the political spectrum, the flag is waving.
On every single house, window, shop, office, car - it is waving.
Some chant with it , some sleep with it , other use it as a bed cover, some wrap themselves in it,others dance with it, some tuck it in , some flaunt it, some claim it to be theirs, others use it a sword and some trade in it ...
So amidst all this flagomania , who is who is hard to say.
I know, I know, you don't need to repeat it to me . There are the ones who are anti and the ones who are pro. I wish these lines were so clear cut to me as they are to you.
I already experienced both and we are still at the very beginning.
It seems almost taboo these days to assert that as a woman , I don't want male clerics dictate to me how to dress , what to watch on TV and what takes place in my bed .This is not happening yet, but I see the shadow looming on the horizon.
And it is also as taboo to assert that, as a woman I don't want the dictates from the United States, France and Israel run my life .
The antis are already calling women who don't want an eventual hard line Iranian mullah rule "whores".
The pros on the other hand call the women who would like autonomy from Western rule "backward sluts".

So if in either case we are considered whores and sluts, might as well do what I damn well please.

In the end , women are going to pay the price for this "upsurge for Independence " as usual. Why search far, just have a look at the "feminine" condition in Iraq or what is left of it .
Besides which, Independence from whom exactly , no one can tell for a fact. Independence from America, Israel, France, Syria , Iran ...? Your guess is as good as mine.

I think I have said enough for today, better sign off fast before either mob lynches me .

Anonymous said…
it's the religion of nationalism.

A fake pretentious monstrous religion. Has all the pomp of true religions but not of their balm and substance.

ah Europe has many bastard children. never through legitimate marriage with the foreign lands that get raped.
3:50 PM