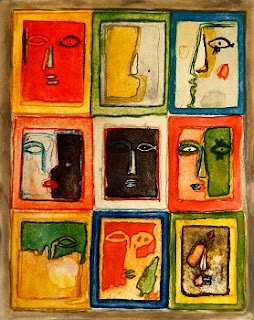 We have a ritual that we share on a daily basis.
It is an unspoken agreement.
No matter what the distances are , whether we are next door to each other or miles away , we call each other daily just to "check".
This ritual helps us preserve whatever familial and social fabric we may have salvaged , a protective wall from the total disintegration around us.
Today was my turn to call.
Radhee was on the other end of the line .
We have skipped asking the usual "How are you".
The sentences are short and usually start with "Is everything ok? Am just checking".
Radhee spoke very fast and went into a litany of all the woes around him .
Auntie Salma cannot make it to the doctor , it's too dangerous .
Uncle Wassem has run out of medication and it is nowhere to be found . Trying to cross the city to another district to find it, is too dangerous.
Cousin Reema , a widow, has not been getting any of her husband's pension, she needs to go and search for a job, but what's the point, there are none and in any case it's too dangerous.
Abu Saleem, a father of 4, has been out of work for nearly a year now and can no longer feed his kids. He is in total despair and proposing his services to anyone is out of the question, it's too dangerous .
Radhee himself dares not go shopping for food in the neighborhood, it's too dangerous.
His son Bassel, a brilliant surgeon stopped showing up at the hospital, it's too dangerous.
Abu Issam and his wife and their kids left the country because everything is getting too dangerous .
And the list goes on ...
Once we finish checking on the family network or what is left of it ,we start with the neighbors, friends and acquaintances circle.
And it usually goes this way : " Do you remember so and so , well he is kidnapped, and remember X , they abducted him and Y , he disappeared and Z, he was tortured to death..."
Once we are done with this round , we move to war zone reporting.
"Three mortars here , a car bomb there , loud explosions in the vicinity, bullets across the street checkpoints here and checkpoints there ..." and it goes on .
Radhee paused for a minute or so , took a deep breath and said : " By the way , I forgot to mention that Uncle Kamal died ".
"How, when, who killed him, was he tortured, was he imprisoned, who found him, where, was he dumped ? A street, a prison, the morgue ?...
I bombarbed him with questions .
"No , no , he died a natural Death." Natural Death in today's Iraqi lingo means: old age, an illness, lack of medication or medical care , that kind of stuff.
I sighed with relief so did Radhee .
"Praise to God , may he rest in Peace", we both uttered at the same time.
And Radhee concluded by saying:
"He is lucky, now he can rest . What about us left behind, when will we find rest ?"

Sleeping, if one can sleep that is and waking up if one is "lucky", with dread and anxiety,24 hours a day, 7 days a week, day in and day out, non stop, no respite.
No this is no General Anxiety Disorder that a couple of Prozacs can cure . No amount of anything can cure that- short of a total Peace . A total Peace that only dead Iraqis know.

Yes Ladies and Gentlemen , the "living" or more aptly the "surviving" Iraqis envy the Dead .
Some, miles away cherish Life and hold on to it and some wish its clement ending.
A crazy paradox ? I don't know.
All I know is from whichever way one looks at it- It's lucky You.

Anonymous said…
Dear Layla,
My following comment applies to all your writings and not just to this one.But as I don't know how and where to post a general comment, I will do it it here.
I would also like to add that , given the various comments I have read, I believe that most of your readers will agree with what I am about to say.
-Thank you for using all your senses in a senseless world helping us to remember and revive our senses.
Mash'Allah your intelligence and analyses are a brain reviver.Your descriptive capabilities are an eye opener.Your deep, genuine, heartfelt thoughts and feelings are a soul soother.
-Thank you for sensitising us in a world desensitised by consumerism and mediatic junk.
-Thank you for sharing your knowledge and your commendable artistic taste (both of which am sure have taken a lot of time and effort on your part to accumulate/develop)in a world shrouded by willful ignorance and distasteful images.
The work of the true faithful for God requires us to share not only what we have but also what we know.
-Thank you for writing with such brilliance.You have managed to intertwine your personal experiences with your extensive knowledge of history, sociology,philosophy, politics,sexual politics,religion,psychology and to present us with informative, powerful and poignant work! not devoid of a subtle sense of humor thanks to your clever twists and turns of words; in a world where the common language has shrunk to meaningless jargon and abbreviations.
-Thank you, not only for displaying beautiful artwork,poetry and songs (the artists concerned would be thrilled am sure) but also for taking the time to carefully select the appropriate ones.A clear sign of refined esthetic taste, in a world where the expression "refined" is used only to describe sugar!
-Thank you for giving so generously in a world full of takers, grabbers and scroungers.
-Thank you for your honesty,candidness, integrity and courage, in a world filled with lies,deceipt and cowardice.
-Thank you for using your God given talents to do good by spreading knowledge and truth,and reamining true to your convictions however hard that must be in a lobsided world where souls are being sold to the devil at "unbeatable rates"!
May God bless you and your efforts at all times.Amen.
Lucky us indeed...
10:36 AM

Anonymous said…
t well said and i totally agree with your comments.